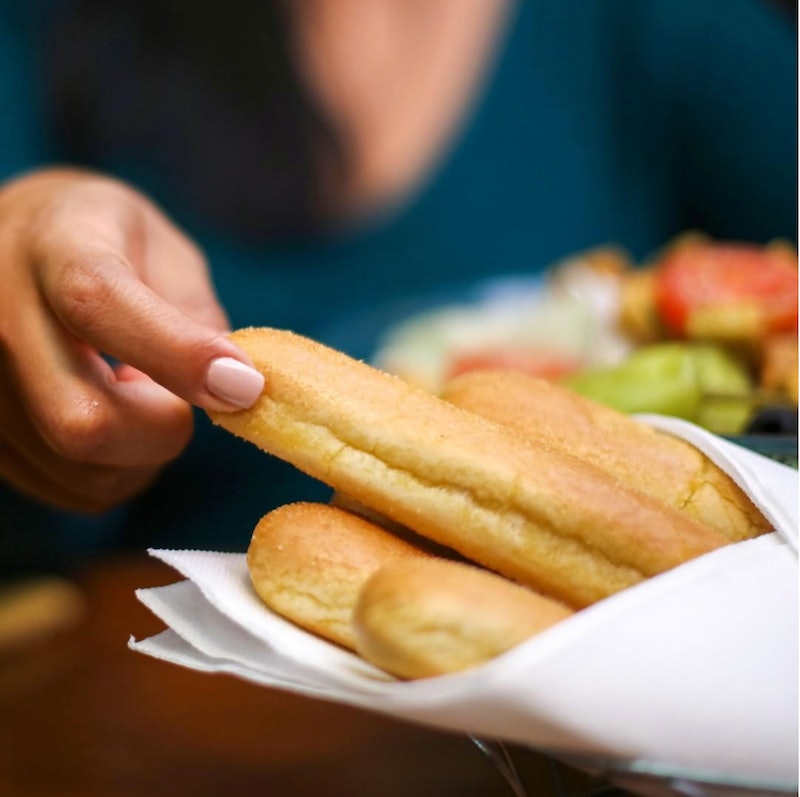 So you slide into your chair at the Olive Garden, and there's one question on your mind: How many free breadsticks am I going to chomp on today? Well, one of the Italian restaurant chain's primary investors actually thinks you're not eating enough — or at least, you're leaving too much on the table that's going to waste. In a new 300-page report aimed at the company's management and policy issues, Starboard Value claims that Olive Garden gives away too many breadsticks, frivolously piling them on tables by the basketful when a slower, smaller supply would cut down on consumption and waste. In other words, if they have their way, the Shangri-la of breadsticks will involve a lot more asking.

As Vox details, the sheer number of breadsticks that Olive Garden tears through annually really boggles the mind. Apparently, they go through 675 to 700 million breadsticks per year — that's more than 1.8 million per day at the low end, for those of you without a calculator on hand. And Starboard Value believes that the bulk of that expenditure is because some restaurants aren't following the company's official breadstick policy — to bring out one breadstick per person, plus one more. But in reality, as anybody who's been to an Olive Garden knows, they're provided in far-greater abundance than that.

Luckily for all of us, this doesn't mean that we're going to get cut off from the breadstick supply. In the first place, there's no telling whether Starboard Value will get its way on this, and all the other issues raised in its report. As Vox explained, they're locked in a long-term struggle for control right now with Darden Restaurants, Olive Garden's parent company, and unless they prevail in a shareholder's vote, there's no telling whether Darden will take the proposed reforms seriously. But it sort of seems like a no-brainer, honestly — Starboard's report highlights the all-too-common tragedy of breadsticks getting cold on the table, and getting a whole lot worse as they do. In fact, they say that Darden is well aware of the perils of cold breadsticks.

By forcing consumers to actively request more breadsticks, while you might feel a little more sheepish about how many you're eating, you'll also be getting a fresher supply. Instead of being forced to chew through those cold, greasy ones, a new basket would be brought to your table upon your request. Starboard Value estimates that this change alone would save Olive Garden about four-to-five million dollars per year. Their report was pretty brutal about the breadsticks on the whole though, as Slate notes, saying they've tasted like "hot dog buns" recently.

It's not their only note, either — they're also particularly brutal in criticizing Olive Garden's pasta, and revealed that they haven't been putting salt in their pasta water, which is as basic a prerequisite for proper cooking as anything. Basically, you've been getting fleeced on your pasta's quality without even realizing it, but it kind of makes sense. How lovingly crafted can pasta really be, after all, when you can buy an unlimited supply for $100?

More like this
How The City Healed Five Years On From The Manchester Arena Attack
By Ella Glover
How To Support Gun Control Reform Right Now
By Morgan Brinlee and Carolyn Steber
How To Make Workplaces More Welcoming For Men In 11 Easy Steps
By Ginny Hogan
What Is Mandy Moore’s Net Worth?
By Hugh McIntyre
Get Even More From Bustle — Sign Up For The Newsletter