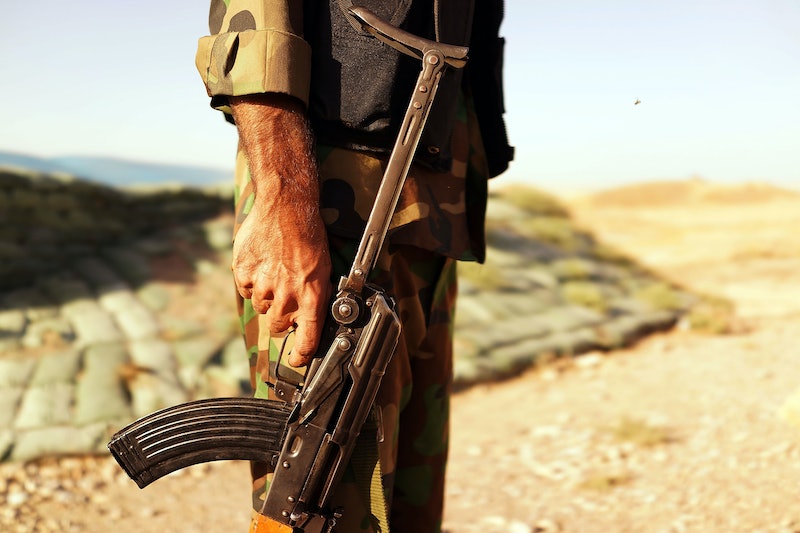 This is not good news. Another hostage being held by ISIS, David Haines, has apparently been executed by beheading, as revealed in a video uploaded onto Twitter Saturday. It's just the latest in a string of grisly, videotaped executions by the Islamic militant group, but is the first such video to feature a non-American — unlike slain journalists James Foley and Steven Sotloff, Haines was British, and a foreign aid worker. Haines was reportedly seized by ISIS while working for ACFED, a non-governmental organization (NGO), in Syria in 2013. While the video hasn't yet been confirmed by authorities, it's hard not to assume the worst. The prior two execution videos ISIS released were later confirmed as legitimate, and in keeping with their usual method, they've threatened yet another hostage after Haines' apparent death — a man identified as Alan Henning, another Briton.

Assuming the video is legitimate, the 44-year-old Haines' execution makes three consecutive ISIS videos showing the killing of foreigners kidnapped within Syria. Foley and Sotloff were working as journalists in the field, while Haines had only been doing aid work in Syria for three days before he was captured, according to The Guardian. Haines' family had been trying to contact ISIS to plead for his life Friday, according to the BBC, but the requests for contact went unanswered — just as they did when Sotloff's mother Shirley made an emotional appeal to ISIS leader Abu-Bakr al-Baghdadi in late August.

According to The Mirror, Haines was born in East Yorkshire in England, raised in Perth, Scotland, and had been living in Croatia wife his wife Dragana prior to his capture. He's also the father of two daughters, ages 4 and 17.

The question of how to handle these kinds of terrorist video releases has vexed media outlets and governments alike, but this much is undeniably newsworthy — this time, ISIS isn't making its pointed threats towards America and President Obama. Rather, the title of the video is "A Message to the Allies of America," and it's specifically directed towards the U.K. and British Prime Minister David Cameron.

The masked killer — seemingly the same man who killed Sotloff and Foley, believed to be British rapper-turned-terrorist Abdel-Majed Abdel Bary, though that's not confirmed — specifically cites Cameron's agreement to help arm the Kurdish military, known as the Peshmerga. But really, at this point, it's pretty clear that any excuse will do. Neither Foley, Sotloff or Haines played any role in any of these decisions, but ISIS killed them all the same, in the most graphic and brutal of circumstances.

In short, the immense domestic political pressure that came down on Obama to choose a course of action following the release of the Foley and Sotloff videos has now fallen on the shoulders of Cameron, as well. And Britain's position relative to ISIS is in many ways more frightening than that of the U.S. — a startlingly high number of British citizens are fighting for ISIS across Iraq and Syria, leading Cameron to suggest the government may suspend passports of all suspected members.

It's likely that military action against ISIS is going to be ramping up in the near future, regardless of the threats the video contained. The Obama administration has indicated, according to Time, that they're considering the 2002 Authorization of the Use of Military Force (AUMF) as potential grounds for expanding the battle against ISIS without further congressional approval.

This is not without irony — the 2002 AUMF was passed to authorize the Iraq War, and Obama's opposition to that war proved a crucial distinction setting him apart from Hillary Clinton, helping him win the Democratic presidential nomination in 2008, and ultimately, the White House. Even further, as the Washington Post details, National Security Adviser Susan Rice asked House Speaker John Boehner to repeal the AUMF in July, calling it "outdated."

President Obama has released a statement on ISIS' apparent execution of Haines, calling it a "barbaric murder."

The United States strongly condemns the barbaric murder of U.K. citizen David Haines by the terrorist group ISIL. Our hearts go out to the family of Mr. Haines and to the people of the United Kingdom. The United States stands shoulder to shoulder tonight with our close friend and ally in grief and resolve. We will work with the United Kingdom and a broad coalition of nations from the region and around the world to bring the perpetrators of this outrageous act to justice, and to degrade and destroy the threat to the people of our countries, the region and the world.