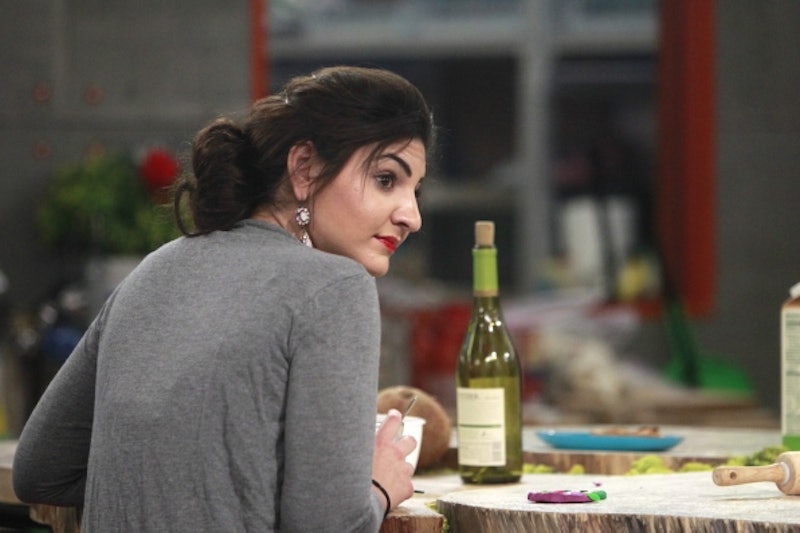 It's been three days and I'm still not over it. Can we revisit the fact that Derrick asked Victoria to do him a favor and she turned that favor into Victoria's first real game move of the entire Big Brother season? She might not be the strongest competitor in the world, but Derrick, who is definitely the strongest player of this season, took Victoria under his wing and Victoria is willing to do anything she can to help him. So when Derrick asked Victoria, who was about to be evicted, to pretend that he had betrayed her and that she was angry with him to increase his chances of being the one the remaining house guests decide to take to the finals, Victoria not only got it done but she got it done with style. The girl literally made herself and Frankie cry, talking about how hurt she was about Derrick's imaginary betrayal.

Once I got over being depressed, I just got sad. After all, if Victoria is capable of manipulation like this then why hasn't she been playing Big Brother this whole season? Victoria has made it this far entirely by luck and everyone knows, as she knows, that she's going to be going home not long after Frankie does. When it looked like Zach was going to be evicted, his biggest regret was that he was going home before Victoria because he actually did things in the house. Victoria? Not so much.

The thing is, Victoria has done absolutely nothing all season and she is not only the last girl standing but, if Frankie is evicted during the next eviction ceremony, she will also be in the final four. As hard as Derrick has been campaigning, there's a legitimate shot that Victoria might go to the Final Two over him because everyone knows that they can beat her whereas no one really knows Derrick's game except that he is playing one. He's never even been on the block and Cody and Caleb might find that a threatening thing at some point.

If Victoria took a moment to stop helping Derrick play his game and started playing a game of her own, then she has a decent shot at actually winning. She might not be good at competitions, mental or physical, but she's got blind luck, like the Rewind Button being used the very eviction that was going to finally send her home, and she's got the ability to convince anyone of anything — especially if she can cry at the drop of a hat like she did with Frankie. She's completely underestimated and makes for the perfect pawn, which could carry her to the Final Two on that basis, and she's made the right alliances.

After all, Christine sticking up for Nicole once had Frankie foaming at the mouth and ready to evict her while Victoria formed a sincere bond with Nicole in the two weeks she was back in the Big Brother house and no one batted an eyelash at them. At this point, Victoria can basically do whatever she wants. Derrick, Cody, and Caleb have spent most of Saturday discussing which jury members they think would vote for which house guests and, quite honestly, I'm willing to bet that if Victoria makes it to the finals then the jury members would vote for her just for the sheer fact that they'd be floored she made it that far.

All I'm saying is, if Victoria can make it this far in this game by doing absolutely nothing, then there isn't a doubt in my mind that she could actually win Big Brother if she actually tried. Sadly, it appears that while the other house guests are studying the wall to prepare for the Veto Competition, Victoria is busy picking out her clothes and lying around the house. Then again, she knows that the target for this week is Frankie and not her, so what has Warrior Princess Victoria got to worry about? She can sail through Big Brother without lifting a finger to stir a single pot and that's more than any other house guest can brag.