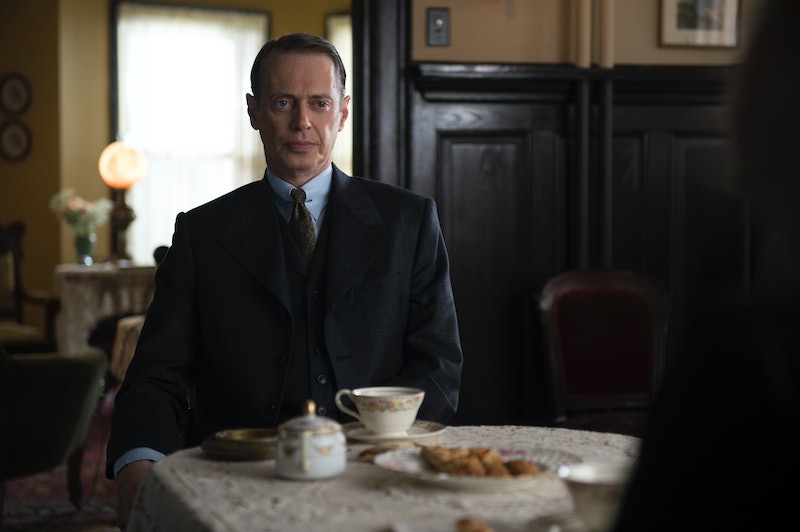 "No On Goes Quietly," and that includes Nucky Thompson. Last Sunday, HBO aired the Boardwalk Empire Season 5 premiere and fans got something they haven't seen more — a glimpse at Nucky's childhood. And in Sunday night's new episode, "The Good Listener," spent more time on the events of Nucky's past, particularly the death of his sister and his father leaving their family. Obviously, fans can assume that Boardwalk Empire 's final season is going to go out with a bang — so is this the series' way of preparing us for Nucky's death?

It's no secret that Boardwalk Empire is more than willing to kill off series regulars and main characters that drive the storyline (RIP Richard Harrow). So, it should come as no surprise, especially considering how much a bloodbath the series has been in the past, that Boardwalk would decide that a fitting goodbye to Nucky Thompson would be to put him in a pine box. Unless, of course, they're going to go all Sopranos on us and leave Nucky's fate up in the air. (God help us.) But, if we look at the hit on Nucky in Cuba in the premiere, it's obvious that the series is setting us and Nucky up for a truly bloody ending.

So far the flashbacks of Nucky's childhood have taught fans a lot about how he became the business-savvy, manipulative kingpin of Atlantic City that we've watched for the past four seasons of the HBO drama. During the premiere, we saw his first brush with the idea that honesty and integrity aren't always the smartest business choices as he fell in line with the Commodore and the rest of the boardwalk's original gangsters. We've also been introduced to Nucky's father and the negative influence he had on him as a child. He's an alcoholic and not really a stand-up guy, but the moment where he cracks Nucky across the face because he didn't catch a gold coin at the boardwalk contest explains so much.

In the latest flashback, we see the death of Nucky's sister and the effect it has on him and his family. And we also see him emotionally detach — he shows up for work on the boardwalk late, explains the situation, but when his boss tries to send him home to be with his family, he begs to work instead. He chooses his work and his alliance with these powerful men over his family life and we see that again when his boss shows up and tries to offer money to pay for a proper burial of Nucky's sister. Nucky sides with his boss because it's the best decision to provide for his family and that's enough to shove his father out the door, mid-burial of his sister.

So, we've seen a handful of major events in Nucky's adolescence that turned him into the man he is. But what do they mean? It seems, considering how Nucky's trying to go legit now that Prohibition is ending, the series and its main character are looking back on how these experiences turned him into the corrupt man we see on Boardwalk. And perhaps, by going legit, Nucky's trying to set these events right. The flashbacks could also be Boardwalk finally letting us get to know Nucky's backstory, just in time to under the man before he gets the axe.

Will Nucky die? It sure seems like it, considering the season started out with an attempt on his life. But Boardwalk Empire's making damn sure that we don't misunderstand him and that we'll miss him when he's gone.