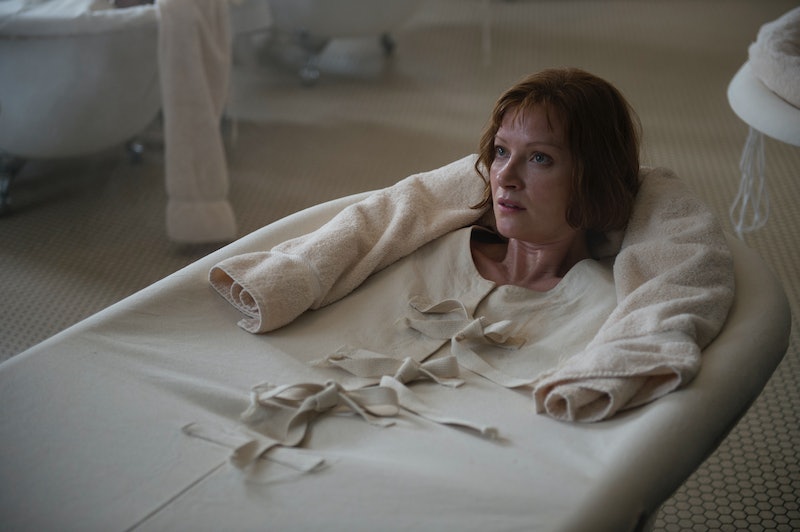 OK. What the hell is all of this about? After an infuriating Season 4 that included trying to raise her grandson in a brothel, Boardwalk Empire Season 5 checked in with Gillian Darmody. And she's not suffering nearly as much as I wanted her to. In fact, it seems like she's doing pretty damn well for herself in this women's treatment facility. Gillian's linked up with the director and Sunday night's new episode of Boardwalk Empire showed them chatting it up about clothes and flattering their figures like they're BFFs at a slumber party. As opposed to, you know, a former drug-addict that had sex with her son and killed a man that looked just like him.

I've always had a hard time rooting for Gillian Darmody, mostly because I've found her to be incredibly whiney, insufferable, and a just a weak link for Boardwalk. When Nucky killed Jimmy off at the end of Season 2, the series should've gotten rid of Gillian as well, but they didn't. Instead we were forced to sit through her incredibly screwed up memory of convincing her son that incest is totally cool and the creepy seduction and killing of a man that looked just like him. Along with all of her other issues like trying to kidnap her grandson from school and having a drug problem in Season 4. It's all be distracting and unnecessary, but here we are.

At the end of Season 4, Nucky tipped off the police about the whereabouts of the real Jimmy Darmody's body, at the request of Richard Harrow (RIP RIP), which cemented Gillian's fate of going to prison. And, in my eyes, cemented her fate in finally getting what she deserved. The Season 5 premiere gave us Chalky White in a chain gang — even though he managed to escape — and, when you think about it, Gillian really deserves the same thing. She ruined Jimmy's life, she tried to ruin Tommy's life, and she ruined everyone's lives with her creepy justification for incest. But that's not what she's getting. At all.

When Season 5's second episode first checked in with her, I thought she might just be at a spa somewhere, which was infuriating (yes, I know it's absurd to be infuriated by a fictional character's lack of suffering). But, really, she's in a mental treatment facility — you can see my confusion though with the bath situation pictured above. I'm sure that's really hard for her, but she's clearly figured out a way to cheat the system, which is so uncool for Boardwalk to have happening already. I know we've skipped a significant number of years between Season 4 and 5 and that Gillian's a crafty biotch, but c'mon.

Gillian's putting on a submissive act in front of her fellow inmates and at night, on the down-low, she's giving fashion advice to the director of the facility in exchange for stationary. I'm impressed by her resilience considering how borderline nutzo she went in Season 4, but I was really hoping that, after all this time, Boardwalk Empire might give her what she deserves and break her down a bit. Instead it's the same old Gillian and the same old story just in a different place.