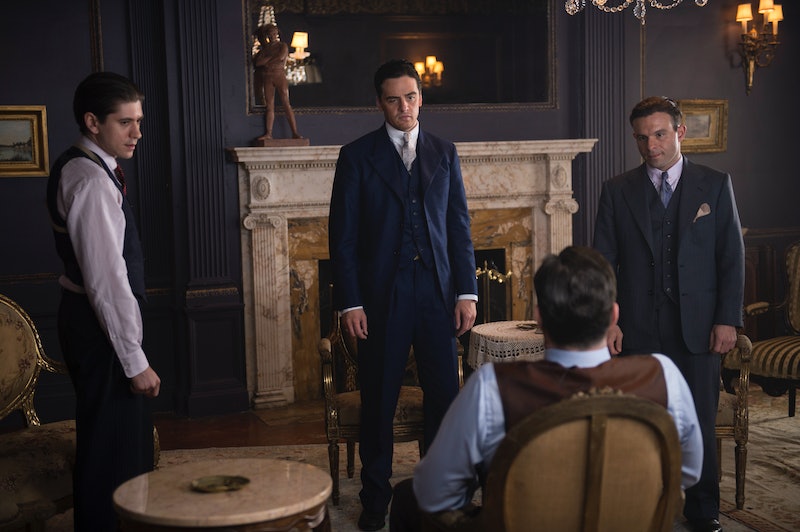 Sometimes it feels like you need a Game of Thrones-level cheat sheet to keep track of who's working for who on Boardwalk Empire. We're only two episodes into the fifth and final season of the HBO drama and you're already probably really confused. When Boardwalk's fourth season left off, the Brothers Thompson, Nucky and Eli, were done doing business together after Eli sold him out. And when we picked up on Boardwalk Empire Season 5's premiere, it seems like Nucky's decided to scale back his operation in favor of negotiating fair deals for the repeal of Prohibition. So, who's Eli working for now? And really, who's working for who in the various crime capitals of Boardwalk Empire?

We've seen a lot of changing alliances over the course of this series and with Nucky playing two ends against the middle like he did with Chalky White and Valentin Narcisse at the end of Season 4, sometimes it's hard to keep up. Some Boardwalk's power-plays are so subtle and nuanced that they're almost unnoticeable at times. Or, in the case of Season 5's six-year time-jump, they got lost in the gap years between the seasons.

Which is exactly the case of Eli Thompson, who showed up for the first time since Nucky pulled a gun on him last season. So, in an effort to keep things straight so we can focus on what's important in Boardwalk's final season, here's your cheat sheet of who's working with who:

It might've looked like Nucky and Sally Wheet were working together, but really they're a couple of confidants that share business interests. As far as Season 5 wants us to believe, Nucky's really going at this alone with the exception of these key players in the end of Prohibition:

1) Senator Lloyd — He's Nucky's link to inside information about the repeal of Prohibition.

2) Bacardi Rum — The ultimate, did I mention legal, business arrangement for post-Prohibition.

Capone's still holding court, loud as ever, with his scars in Chicago. But, as far as Sunday night's episode, his ranks aren't exactly reliable considering he just lost $20,000 during a federal raid.

1) Eli Thompson — From one kingpin to another, Nucky kicked Eli to the curb and now apparently he's a homeless person, according to Van Alden's assessment that he smelt like pee. Eli's clearly a follower.

Luciano's been working with everyone, but in the Season 5 premiere we saw him align himself with Salvatore Maranzano after he executed a hit on his former boss Joe Masseria. Maranzano made Luciano a capo, but he's still got his own side-game going with this crew.

1) Meyer Lansky — Lansky became friends while he and Luciano were both protégés of Arnold Rothstein.

2) Bugsy Siegel — Siegel's upped his credibility since he was introduced in Season 2.

More like this
'Gentleman Jack’s Cast & Crew Are Keen On Season 3, Too
By Frances Stewart
'Bridgerton' Season 4 Will Likely Focus On This Brother's Divided Heart
By Grace Wehniainen and Alyssa Lapid
'His Dark Materials' S3 Features A Character That Isn't In The Books
By L'Oréal Blackett and Rachel Mantock
When Was 'Bling Empire' Season 2 Filmed?
By Alyssa Lapid
Get Even More From Bustle — Sign Up For The Newsletter