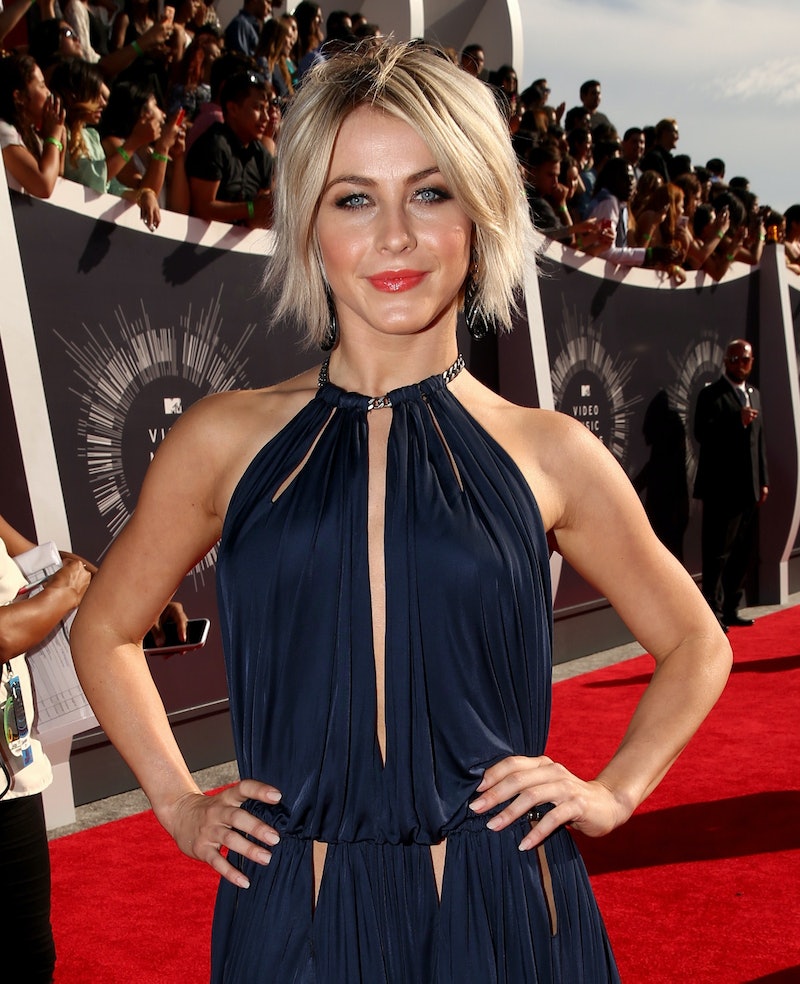 Julianne Hough doesn't quite understand what fair judging is supposed to be like which is concerning considering she starts her stint as full-time Dancing With the Stars judge on Monday. The dancer and actress is also competitor Derek Hough's sister but don't worry she won't take it easy on him. Rather Julianne says, "People are afraid about me judging my brother, but I'm going to be even harder on him." Sorry to break it to you, Julianne, but that's not fair judging either.

Bustle's Kaitlin Reilly already expressed her opinion that perhaps adding a fourth judge to the mix wasn't the best idea as deviating from the format can pull away from the dancing. But Julianne Hough's role is problematic for another reason: it seems like she is extra mean to overcompensate for what people might think of her. In real life (and according to her Instagram account) she's a bubbly, friendly woman. But Hough seems to want to disprove any stereotype that she'd be an overly-kind Paula Abdul type of judge. In order to do that she's gone way over the top.

Hough has guest judged twice on the show before, both with disastrous results. In 2013 she accused dance pro Mark Ballas of deliberately overshadowing his partner. "I've danced with Mark," she said. "You have to stand in front to make sure you're seen." Ballas was furious with the comment and Hough later realized things could have gone better. When getting ready for another judging episode last April she admitted that she had put her foot in her mouth in the past, but assured everyone that the new judging stint would be her "do-over." It wasn't.

That time she targeted Maks Chmerkovskiy, saying he was "phoning it in." Then she added, "I’m sorry; you’re Mark this year," drawing a comparison to her Mark Ballas incident. So much for moving on. But the criticism wasn't only harsh, it was pretty inaccurate. Chmerkovskiy denied having phoned it in, and his partner, Danica McKellar, laughed out loud at the accusation.

I understand that Hough wants to be taken seriously as a judge, but I think she's trying too hard. Instead of being a fair judge she's leaned too far to the cruel side of the judging spectrum and it's likely that this new season will contain more of the same. Especially if she's bent on being harder on her brother than on anyone else. Fair judging comes when you treat everybody equally. Considering that's her full-time job now, the fact that Julianne Hough hasn't gotten that yet is problematic for everyone—especially her brother.

More like this
Twitter Is Upset About The 'American Idol' Top 3 Results: "Who TF Is Voting?"
By Jake Viswanath
Stormi Just Walked A Red Carpet With Mommy Kylie Jenner & Daddy Travis Scott
By Hugh McIntyre
JoJo Fletcher & Jordan Rodgers Got Married In A “Playful & Fun” Wedding
By Grace Wehniainen
The Richest 'Bling Empire' Cast Member Is...
By Hugh McIntyre
Get Even More From Bustle — Sign Up For The Newsletter