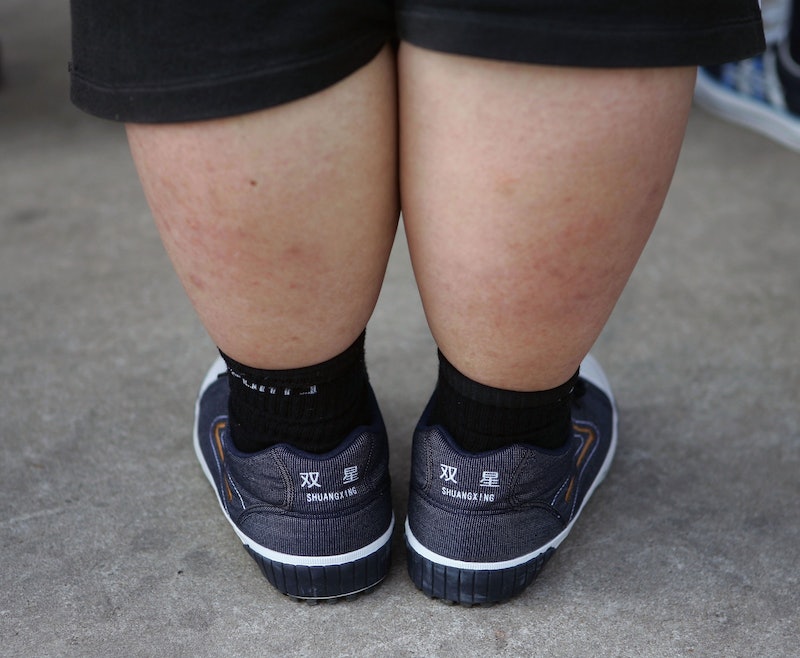 Often times people who fat-shame justify themselves by saying that they're doing a good thing by encouraging other people to lose weight. Setting aside the fact that being mean to other people for a "good reason" is still mean, science is now confirming what plenty of people have been saying for years: Fat-shaming doesn't help people lose weight. In fact, it really does the opposite. So there, fat-shaming forks.

In a new study from the U.K., researchers tracked a group of nearly 3,000 overweight people, monitoring their changes in weight and asking them about any weight-related discrimination they experienced. They found that people who had experienced various forms of discrimination, including things like being disrespected, receiving poor service in stores, or being treated as less intelligent, were more likely to gain weight while people who did not experience mistreatment were more likely to lose weight.

This condition held true even when researchers controlled for other factors, like a person's initial weight. So it's not a simple case of people who are more overweight being more likely to both gain weight and experience fat-shaming — people of all sizes are more likely to gain weight if they are fat-shamed.

In other words, fat-shaming and fat discrimination are counterproductive. In addition to being, you know, shitty things to do.

The researchers say that they don't have enough evidence to definitively say that fat-shaming is the cause of the participants' weight gain. However, they did note that it is plausible since "[p]revious studies have found that people who experience discrimination report comfort-eating," and that people under stress due to discrimination are more likely to reach for "unhealthy, energy-dense food." They also added that "weight discrimination has also been shown to make people feel less confident about taking part in physical activity, so they tend to avoid it."

All of which really begs the question why fat-shaming is still a thing. The answer, of course, probably has something to do with the fact that people are actually more prejudiced against fat people than they are concerned with their health and well-being. After all, when someone expresses their heartfelt concern for someone by treating that person badly, we tend to label that as an unhealthy — or downright abusive — relationship, and with good reason. So why are so many people convinced that behaving this way toward fat people is not only appropriate but helpful?

You don't help someone by discriminating against them. That ought to be common sense, but in case it isn't, it's also science. Being kind of supportive is what helps people, not treating people who are just trying to go about their lives like there's something inherently wrong with them. So fat-shaming? Needs to end, ASAP.