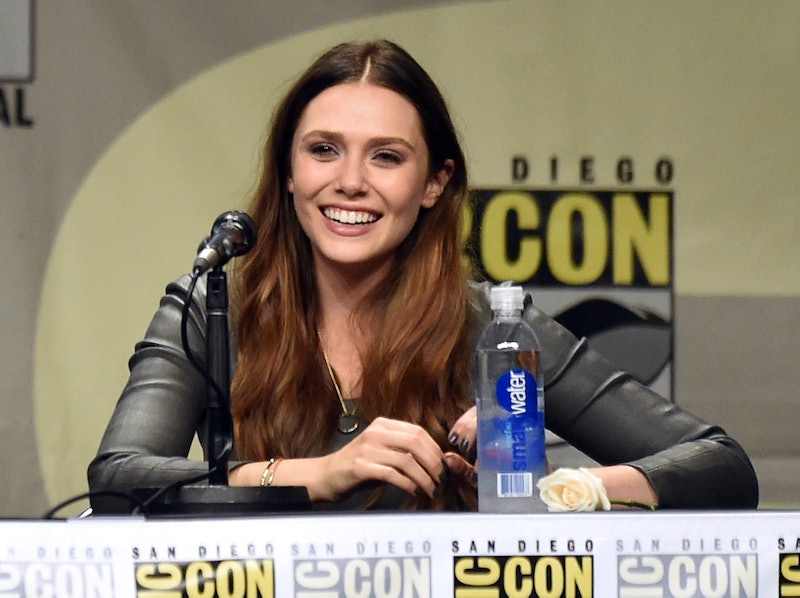 Hiddlestoners, prepare to be jealous of Elizabeth Olsen, because she just got cast as Tom Hiddleston's wife in I Saw the Light. The film chronicles the life of country singer Hank Williams, and his wife Audrey Mae Williams played a large role in that life. Hank and Audrey were together eight years before their divorce in 1952, and Hank died just one year later.

But Audrey Mae was more than just Williams' wife. She was a singer and songwriter in her own right and also managed Hank's career before their separation. Olsen has a wide breadth of movie experience in everything from indie films like Josh Radnor's Liberal Arts to big budget films like Avengers 2. Olsen may be young at just 25, but there's no doubt her acting chops will be up to snuff alongside 33-year-old Hiddleston's own skill.

And while it's good news for the film to have cast another big-named actor with talent, it might be a tough pill for Hiddlestoners to swallow to see their beloved actor with a wife. Loki is the role Hiddleston is best known for, but Loki doesn't have a love interest in the films, so fans haven't really had the chance to see Hiddleston with a woman. But we know how crazy the Hiddlestoners can get, and there's no doubt they'll be jealous that Olsen gets to be married to him.

Congrats to Olsen for snagging the major role. But now she just has to hope she doesn't get mobbed by fans dying to know what it's like to kiss Hiddleston. (Spoiler: According to BBC's The Hollow Crown, it looks like kissing him is fantastic.)

Olsen is one lucky gal.

More like this
Elizabeth Olsen's Chris Evans Friendship Update Was Accidentally Hilarious
By Grace Wehniainen
Elizabeth Olsen Is Better Off Without Us
By Chloe Foussianes
Laura Dern Said “Cultural Awareness” Made Her Rethink This 'Jurassic Park' Fact
By Grace Wehniainen
Colin Firth Revealed His Favourite Mr. Darcy (& No, It's Not Himself)
By Sophie McEvoy
Get Even More From Bustle — Sign Up For The Newsletter