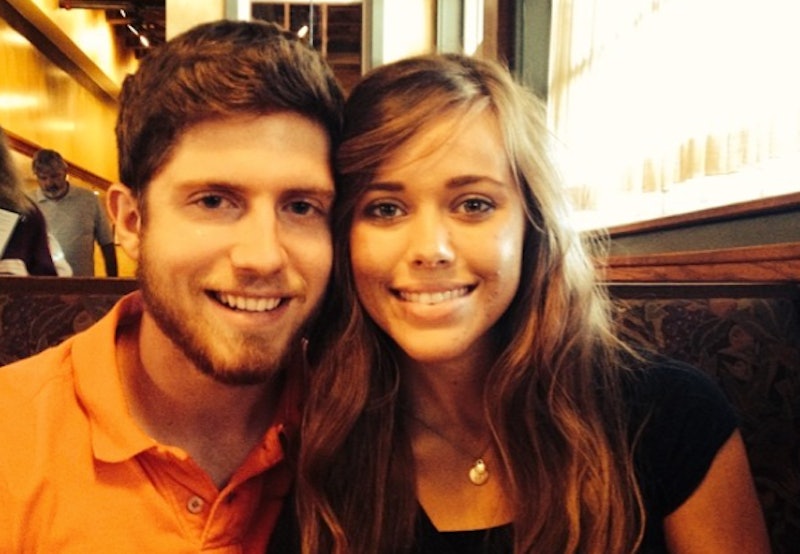 I've recently discovered that star of TLC's 19 Kids & Counting and Jessa Duggar's fiance Ben Seewald is even more religious than I already assumed the fiance of a Duggar would be. As Jessa and Ben's wedding day approaches, we are learning more and more about the soon-to-be Duggar. Let me preface this by saying that last week, my only thoughts on Jessa and Ben vs. Jill and Derick were that Jessa and Ben would probably have cuter babies. Then I wrote an article about Ben and what he does for a living.

During my research, I came across his Facebook page, which is really just status updates ranting religious verses and telling everyone about sinning and evil. In one post, he compared abortion to the Holocaust — for real. I wish I was kidding. It was like one of those crazy people on the subway spewing out nonsense about how you're going to hell, except on Facebook.

I started to wonder about the rest of the Seewald family, because most people don't just think like that without influence from their upbringing. I did some more research, found their family blog, and all of a sudden, it made sense. I understood where Ben got his extreme views.

Ben is the oldest of seven children born into the Seewald clan. His siblings are Jessica, Danielle, Michelle, Ethan, Faith, and Thomas. The Seewald family blog is run by Michael Seewald, Ben's dad, who works as an auto glass technician. His mom is also around the site in photos. Here are some of the most ridiculous statements found on the site.

These young men and women of excellent character, pushing thirty and beyond, with not a prospect in sight, is troubling.I see this especially among young women, and not only do I think it is sad, but could it be a result of wrong thinking?

It's troubling for you to see someone like me without a prospect? If it doesn’t bother me that I'm alone, then it sure as hell shouldn’t bother you. He then gives yet another reason as to why waiting to get married is, apparently, just awful.

A third factor is parents advising their children against the pursuit of marriage until later. They may have good reason for this, because in all reality, most twenty year olds in America are ill prepared for marriage. This may be due to parents not being intentional in their training and/or a societal norm of immaturity and low expectations.

Yes, my mother taught me to figure out who I am on my own before finding someone to settle down with. She also taught me that I don't need a man to complete me. What horrible life lessons. I must be super immature.

"There is only one place where the relentless pursuit of happiness and unselfishness converge. And that, my friends, is only found in a personal relationship with God our maker."

Call me crazy, but my happiness comes from pizza and binge-watching The Bachelor.

A word that better describes my position on gender is complementarianism. This is the idea that men and women are equal in value, yet are created by God with complementary roles. For instance, an egalitarian would have no problem with women pastors in churches, or with women in combat. The complementarian, on the other hand, would see it as the man’s role to lead churches or to fight in combat.

Oh boy! Tell that to the thousands of women fighting for our country because whether or not you believe they shouldn’t be fighting in combat, they are, and they’re kicking ass at it.

The problem is what the problem always is, our sinful refusal to submit to God. If husbands loved their wives like Christ loves his church as he commanded, wives would have no reason to seek liberation from men. Feminism and the women’s liberation movement are reactionary movements that would not exist if men would obey God. There would simply be no reason for them.

Listen Michael, feminism exists for many reasons, but one of them is not because dudes don’t obey the bible. The bible is not telling employers to pay women equally or put a woman in the White House, and that’s just part of what feminists are fighting for.