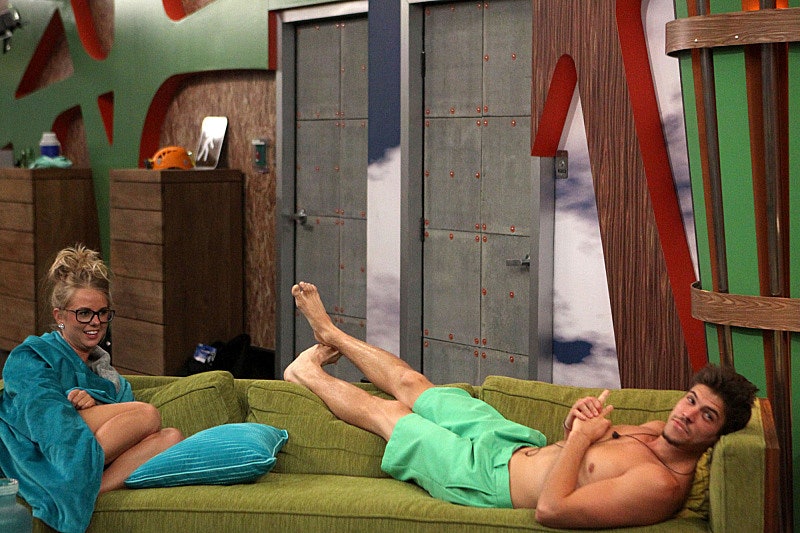 Man, that front door to the Big Brother house is a bit of a revolving door this season, isn't it? First, Nicole won a spot to re-enter the competition after being voted out. Then last week, fan favorites Jeff and Jordan returned to where their showmance began to get engaged in the Big Brother backyard. And now this season's entire jury returned to the house to compete in a luxury competition during Sunday night's episode.

But as is usually the case when you return somewhere after being gone for a while, nostalgia is often more powerful than reality and the experience usually doesn't feel quite the same. Especially when you return to the place where people lied and cheated you out of $500,000, you're not likely to have the warm and fuzzies. So did the jury seem a little bitter to you upon their return? Good, because they are.

The jury members entered the house like a pack of wild animals during feeding time at the zoo. While the remaining houseguests could watch from the HoH room, the jury literally tore the house up, pulling up the couch cushions, pouring food on the ground, and throwing clean clothes on the floor. Basically, it was like having that roommate you didn't end on good terms with. What did they expect would happen if they came back into the house, left to their own devices?

The jury members seemed very happy to get their revenge on the houseguests responsible for their demise in the game. Nicole and Hayden shared a kiss just to make Cody jealous, who as you may remember kind of had a thing for Nicole early on in the game. Donny loved being able to dirty up the place, considering he did most of the cleaning while he was in the house. And Christine could barely contain her maniacal laughter while pouring what looked to be maple syrup on the houseguests' dishes. That's not going to be easy to clean up.

So yeah, given the chance to wreak havoc on the houseguests' lives, the jury members took it. It's possible that they've now gotten all of their aggression out, and from here on out, they will be able to have clear thoughts about who really deserves to win the money when this season wraps up in a week-and-a-half.

But who are we kidding? The jury members are human beings just like you and me, and human beings hold grudges. It's likely that being back in the Big Brother house has just re-opened old wounds. But come Wednesday, Sept. 24, the jury members have to pick a winner, even if they'd prefer not to.