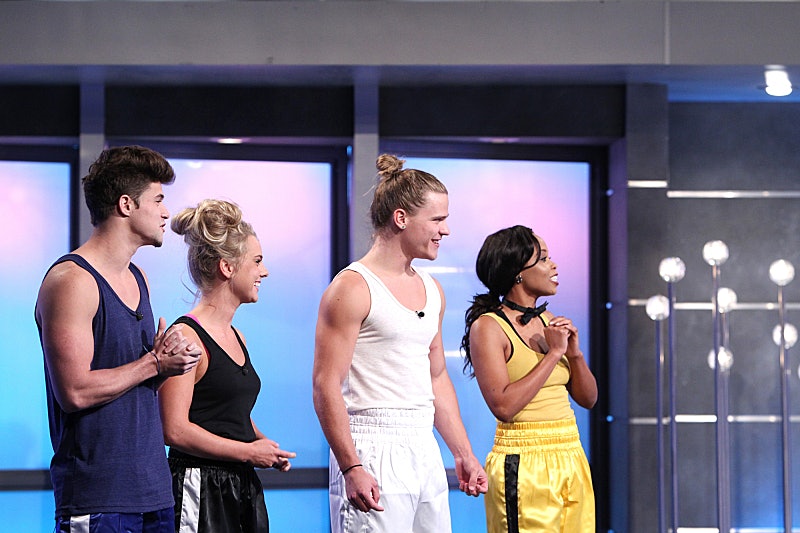 Did anyone else feel a little duped by Big Brother 's Rewind Button when Julie Chen said that the houseguests would do the exact competitions that they already did this past week, yet again? Are they trying to bore us to sleep? Maybe not, because Big Brother has obviously heard viewers' prayers for more jury member footage, when Julie informed viewers that the six jury members would be making "a surprise return" on Sunday's episode.

But what are the jury members going to be doing back in the Big Brother house? We know they aren't going to be competing to rejoin the game (at least I assume not... this game has to end eventually). We also know what the Veto competition is going to be, unfortunately, so we know they probably won't be doing anything too drastic in terms of game play. Here are a few potential reasons the jury could be returning.

There haven't been luxury competitions this season because of Battle of the Block taking up most of our Sunday nights. Now that we don't have to waste an entire episode on that, it is very possible that the houseguests could get a visit from the jury members for a luxury competition! Whether they host it or are participating in it some way, it will be nice to have them back.

Hayden & Nicole are getting engaged

Because this week is a replay of last week, there has to be an engagement just like Jeff and Jordan's, right? It might seem a little unexpected, but isn't that what Big Brother is all about?

Maybe they just want another reason to get Donny more screen time and honestly, I wouldn't complain.

They need help cleaning the house

Maybe the house has gotten so bad that the ex-houseguests have to come in for reinforcements on cleaning duty? From what Victoria had to say about Frankie and Caleb, it sounds like they could use the extra manpower.

Christine wants to come back & say a proper goodbye

Christine left the house in such a haste — and she wasn't exactly welcomed back to society in the best way — so maybe she wants to return to the house and say her proper goodbyes. After all, what is Cody to do without his cuddle buddy?

More like this
JoJo Fletcher & Jordan Rodgers Got Married In A “Playful & Fun” Wedding
By Grace Wehniainen
Twitter Is Upset About The 'American Idol' Top 3 Results: "Who TF Is Voting?"
By Jake Viswanath
Stormi Just Walked A Red Carpet With Mommy Kylie Jenner & Daddy Travis Scott
By Hugh McIntyre
What’s New On Netflix: A Victoria Justice Rom-Com & The Return Of David Letterman
By Arya Roshanian
Get Even More From Bustle — Sign Up For The Newsletter