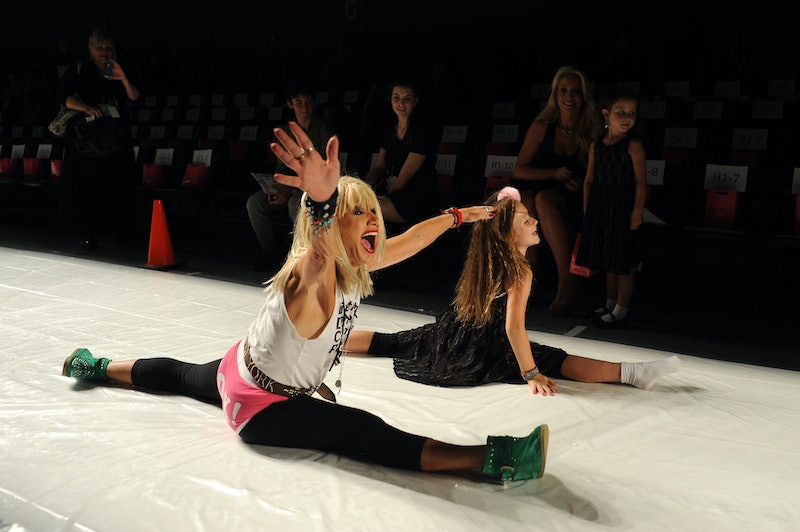 Let's face it: competitive dancing is generally a young gal's game... that is unless you are human glitter bomb Betsey Johnson who joined Dancing with the Stars this season. Known as the cartwheeling queen bee of the fashion world, the tu-tu-wearing free spirit also happens to be 72 years old — or should I say "years young"? And, in case you're concerned, there's absolutely no way DWTS will be wasting Johnson's signature runway acrobatics when it comes to choreography. You just don't mess with a work of art.

Over the years, Johnson has some notable ups and downs. While she is the woman behind such iconic pieces like Lisa Loeb's black dress from the "Stay" music video, there have been some dark clouds over the sea of hot pink frocks in Betsey-land. In 2012 she filed for major bankruptcy, a move she blamed on cheaper copycat designs flooding the market.

Despite that, Johnson keeps bouncing back, rebranding her line, embarking on a reality show with daughter Lulu, and finally branching out to DWTS. While it's exciting to see her make this era her own, you have to wonder: If Johnson is this full of life, drive, and energy at 72, what was the full time fashionista like when she was a youngster?

She Was Prone to Roller Skating Into People's Living Rooms

Promoting her label Alley Cat at the time, Johnson did the talk show circuit her way by rolling onstage in full disco glory. When the host asked her why she wore skates (you probably want to yell "Because she's Betsey-freaking-Johnson, obvs") the designer keeps her composure, saying she thinks fashion shows ought to be entertainment, too. She also mentions she wanted to be a Rockette, which is totally something I could see her doing. The video also gives us a taste of Karl Lagerfeld before he looked like a vampire who feasts on the blood of young models.

She Was A Quirky Mama

In anticipation of her reality show, team Johnson posted delightful throwback shots of herself and daughter Lulu. She's no Betty Crocker; Johnson clearly brings it in the rock star mama category with some whimsical shots of herself and her fashionista spawn. The New York Times even posits that Lulu is the voice of reason to Johnson's wild child ways; Johnson had Lulu with a sculptor who left her shortly after she welcomed her daughter into the world.

She Shacked Up With John Cale

It's true: the Velvet Underground member and Johnson shared a brief though whirlwind courtship, the sort only creatives living and working in one of the coolest cultural circuits to date can. Before their wedding in 1968, Johnson was turned away from City Hall because of her loud pantsuit and decided to stick it to the man by coming back in a micro mini skirt. Sadly, the energy that drove them together also drove them apart; Cale was quoted saying:

Betsey seemed able to pass in and out of my world with ease, but I could not negotiate hers.

Their marriage came to an end in 1971, though Johnson has no bad blood — she told Jezebel that Cale was her favorite paramour.

She Rolled With Andy Warhol

From totally '80s birthday parties at venues with names like Danceteria to rocking flouncy skirts with combat boots at her first fashion show in the late '70s at the Mudd Club, Johnson always had a bit of an alternative edge to her. But before her actual heyday, she rolled with the Youthquake scene of Andy Warhol, and Edie Sedgwick was one of her first models and clients. The photos from Johnson's nuptials to Cale are a literal who's who of beautiful cool people from the '60s, including Warhol.

That settles it: Johnson is officially the coolest DWTS contestant ever.