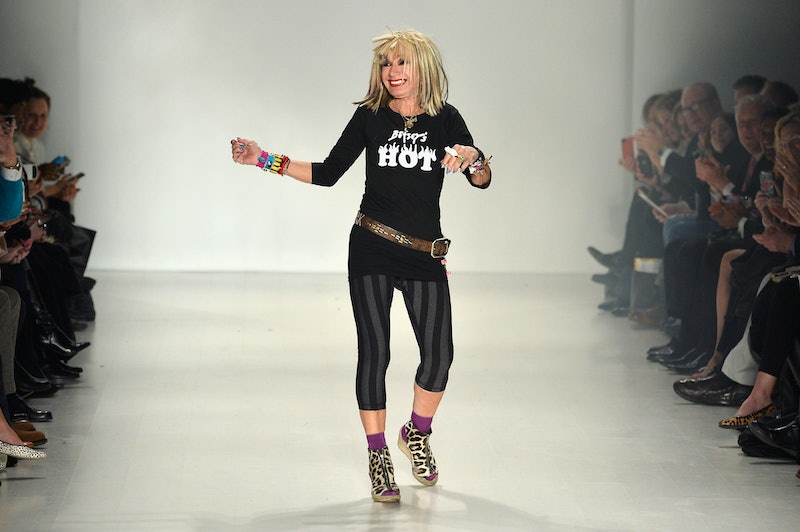 Break out your fluffy cupcake dresses and bust a move because Betsey Johnson is joining season 19 of Dancing With the Stars ! The 73-year-old might be known for designing the prom dress of your (way too expensive) dreams, but if you've ever attended a Betsey Johnson runway show — or mercilessly stalked said show on Style.com — you know she's more than capable of gettin' her groove on.

Johnson has been designing since the 1960s, when she got her start as the in-house designer for Paraphernalia in NYC before opening her own boutique, Betsey Bunky Nini, in 1969. When you've been around the block as many times as she has (I mean, she used to hang in Warhol's Factory — she's seen it all), reality television is a natural next step. Johnson's delightfully wacky personality and penchant for cartwheeling down the runway post-show makes her a fab-u-lous fit for the dance competition. She's almost guaranteed to be a fan favorite.

Are you as excited as I am to see Betsey J. make her ballroom dance debut (alongside YouTube sensation Bethany Mota)? As we count down the days until the show's September 15th premiere, allow me to direct your attention to the following proof that Betsey Johnson has what it takes to rule the DWTS stage.

Look at that form!

I think I pulled a muscle just watching that.

She's gotta get those kicks up if she wants to make it to the DWTS finale!

Betsey, Master of the Resistance Band. She's so advanced she even uses props!

Well we already know she can balance in heels...

7. And one more split for good measure!

How is she so flexible?!