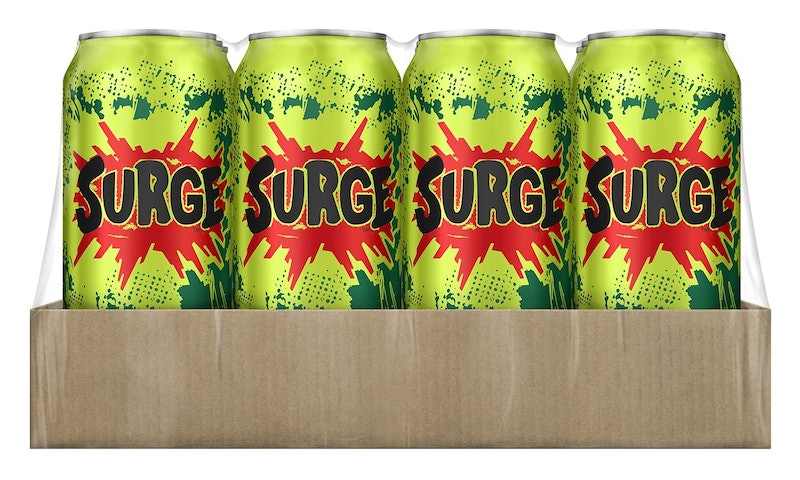 Foods and beverages come and go — but once they’re gone, it’s not always forever. Case in point: Surge soda is back! According to BuzzFeed, Coca-Cola will be selling the citrus soda exclusively on Amazon starting today, September 15. Clearly Coke has been listening to its customers; a number of fan movements have been crying for Surge’s return for years, and now, they’ve finally got their wish.

Coca-Cola originally launched Surge in 1997 to compete with Mountain Dew (owned by PepsiCo). Although it enjoyed some lucrative early years, by 1999, sales slipped dramatically; the drink was ultimately discontinued in bottled and canned form in 2002, with the syrup used to create it ceasing production in 2003. As is the case with many discontinued products, fans of Surge have banded together in their nostalgia, encouraging Coca-Cola to bring back their favorite drink: Both SaveSurge.org and The Surge Movement have been petitioning for its return for years. And hey, congratulations, guys! You did it! Whether or not Surge sticks around remains to be seen — said Wendy Clark, president of sparkling and strategic marketing for Coca-Cola North America, “Future plans for the brand will depend on the level of excitement exhibited by fans across the country.”

Not going to lie: I don't even like Surge personally, but I’m still pretty stoked about the news. It’s the first time Coke has sold a product exclusively online, so if it’s a success, who knows what they might do next — or what other soda companies might do, for that matter. Is anyone else kind of wishing these other discontinued drinks might make a comeback sometime soon?

This offering from Clearly Canadian was all the rage when it debuted in 1997; sales flagged quickly, though, causing it to vanish from shelves a year later. I guess the world wasn’t ready for a “texturally enhanced alternative beverage.” As of July 2013, though, Clearly Canadian was considering bringing it back for a limited run, so maybe we’ll be seeing it again sometime soon.

It’s probably better for all of us that Jolt isn’t available anymore; first created in 1985, the supercaffeinated cola bit the dust when The Jolt Company filed for bankruptcy in 2009. They’ve since been relaunched as energy drinks, but let’s face it: It’s just not the same, even if one of them is called “Power Cola.”

Once upon a time, Snapple released a line of sodas that was truly something to behold. Without a doubt, though, the best one was called Tru Root Beer. Following in the steps of the clear soda craze, it tasted like root beer, but looked like sparkling water — and it was absolutely delicious. Alas, though, Snapple has no plans to bring back these remarkable beverages, so they’ll have to live on in our memories instead.

Although Hi-C technically isn’t a soda, it’s still considered a soft drink — just not a carbonated one. As such, I think it deserves a spot on this list. For some reason, Ecto Cooler was the only Hi-C flavor my mom would let my brother and I drink; maybe it seemed like it had more actual juice than some of the other ones? Who knows. The Ghostbusters-themed beverage was renamed a few times before being totally discontinued in 2007— BUT! You can make it yourself at home with this recipe. You’ll also have to DIY your own decorative Slimer, but hey, there are worse ways to spend your free time, right?

Because we can’t very well not include it here, right? For the curious, here's your complete history of Crystal Pepsi. You're welcome.

More like this
How To Make A Dirty Shirley Cocktail
By Emma Garza
Everything To Know About 'My Big Fat Greek Wedding 3'
By Grace Wehniainen
Emma Thompson, Lashana Lynch, & Stephen Graham Lead Netflix’s 'Matilda'
By Sophie McEvoy
Why You Loved 'One Tree Hill' So Much — And Still Do
By Sabienna Bowman and Radhika Menon
Get Even More From Bustle — Sign Up For The Newsletter