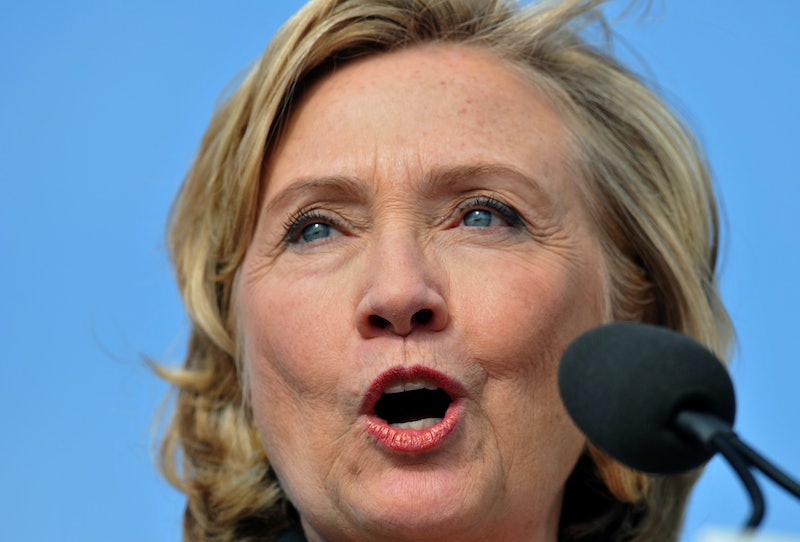 With each passing week, the slow build continues. Millions of potential supporters and both major parties are anxiously waiting to learn whether Hillary Clinton will run in the 2016 presidential election, giving the Democratic party perhaps its strongest 2016 candidate. Lately, Hillary's been dropping some hints on her presidential plans, making us feel like it's Christmas Eve.

Clinton sure looked like a hopeful presidential candidate Sunday when she attended the Harkin Steak Fry, a Democratic fundraising event hosted by Iowa Democratic Senator Tom Harkin that has long been a sort of ritualistic destination for Democrats mulling a White House run. Senator Harkin is retiring this year, making it the final such event after a 37-year run, and Sunday brought the Democratic Party's ultimate power couple to the forefront.

And Hillary wasn't shy about tickling people's hopes for a presidential announcement. She made clear to the assembled crowd of 10,000 or so Democratic donors, according to The New York Times, exactly what was on her mind. "It’s true," she said. "I’m thinking about it."

Which is just another instance of her stoking expectations this year. C'mon, Hillary, you wouldn't tease us for nothing, would you?

The trip to the all-popular steak fry was Hillary's first visit to Iowa in six years — she hasn't been since her 2008 presidential primary loss to then-Senator Barack Obama. The Iowa caucus is the first leg of the primary gauntlet, and it was there that an win by Obama set the tone for her eventual defeat.

Despite the bad memories, she reportedly seemed in forward-looking spirits during the event, thanking supporters who wished her well on a potential campaign. As The Wall Street Journal alludes, she also gave a cheerful greeting when starting her televised appearance, calling out "I'm back," and admitting she had "a few things on my mind these days."

Whatever her plans, Hillary was at least acting the part of a presidential candidate Sunday, and it's fueling the already widespread sense of certainty that she will indeed decide to run in 2016.

She Knows How to Play Up the Suspense

It's obvious that Hillary knows what she'd doing, and knows what the people interviewing her, questioning her and watching her are all always thinking. This instinct was on full display during her visit to Jon Stewart and The Daily Show in July, when Stewart asked her what shape office she preferred — whether she like one with corners or no corners. Said Hillary:

I think the world is so complicated, the fewer corners that you can have, the better,

Stewart's coy line of questioning probably didn't surprise her — all throughout her book tour, there was an ever-present understanding that the thing people were really driven about was her political future.

And The Decision Should Come Soon

If you're still anxious to get the final answer — and the potentially historic implications of her running and winning alone sure do warrant some anxiety — you may have to wait a while longer. That's because Hillary has alluded to her timeline about making the big reveal before, and it isn't likely to be for a bit.

Speaking at an event held by telecom billionaire Carlos Slim in Mexico City earlier this month, Hillary revealed that she plans to make her decision sometime after the first of next year. But there's really only two ways to view her attendance of the Steak Fry, and having already decided not to run isn't one of them. She could either be attending in full knowledge that she's going to run, or could be doing so to make sure she's putting on the right appearances if she decides to do so.

Basically, she hasn't really said it yet, but it's beginning to look like a done deal that we'll have a Hillary Clinton candidacy in the near future. Obviously there are plenty of reasons she might rather not do it — it's a taxing business, and she's always received a uniquely rough, occasionally sexist sort of media coverage. But for the last several months she's done basically everything you'd expect to show that she's on-board, and when you look at the handful of likely major challengers that stand between her and the White House, it's not hard to see why.

More like this
President Zelensky Spoke Out On Ukraine's Chances Of Hosting Eurovision Next Year
By Sam Ramsden
Michigan’s Governor Is “Going To Fight Like Hell” To Protect Abortion Access
By Andrea Zelinski
How To Fight For Reproductive Rights, Based On How Much Time You Have
By Courtney Young
What Is Barack Obama’s Net Worth? He Makes *Way* More Now As An Ex-President
By Hugh McIntyre
Get Even More From Bustle — Sign Up For The Newsletter