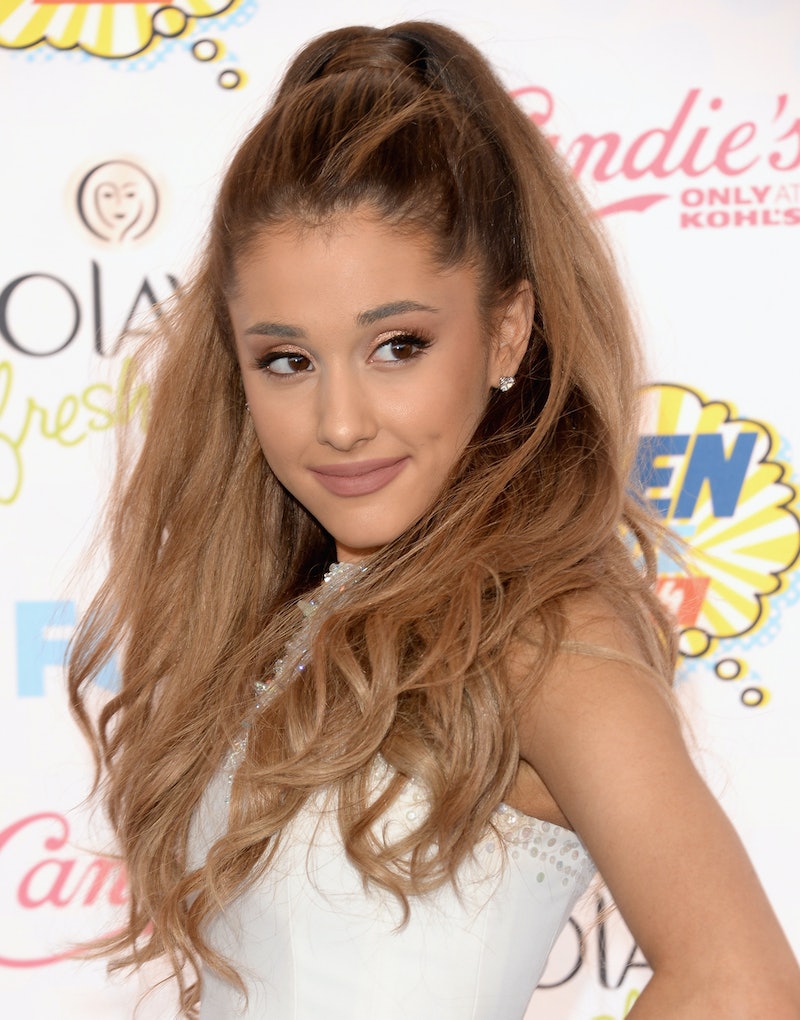 The left side of Ariana Grande’s face graces the cover of Marie Claire for the magazine's October issue. In the issue, she dishes about her climb to the top. (You know, the explanation for why you've attempted to reach those glass-breakingly high notes in “Problem" for the past few months.) Ariana Grande’s totally made a name for herself and her ponytail beyond her Nickelodeon roots and teen idol rep. It’s kinda strange to think of her acting as Cat Valentine — first on Victoria Justice’s career kickstarting show Victorious, then later on its spin-off, Sam & Cat. Yet with her newfound success and wider audience, I wonder if Ariana Grande will ever return to her acting roots. Unfortunately for fans of her acting, her new interview makes it sound like she's over it.

It sounds like Grande sounds was pretty antsy to get her music career started. She told Marie Claire, "I was 14 years old and ready to make an R&B album. I was like, 'Where is that Mary J. Blige collab? Where is that Natasha Bedingfield writing session? Where is my session with India.Arie? I’m ready. Let’s go.'" Ah, such idealism. Grande first got a part in the Broadway musical 13 when she was only 14 and later made her way to TV which gave her the entry she needed into the entertainment industry

From there, Grande became something of a superhero living dual lives — acting by day at Nickelodeon, then heading to the recording studio to sing by night. Her first album, Yours Truly, was released last year when Sam & Cat was still on the air.

Still, maybe relying too much on her sitcom persona had taken its toll. She told the magazine that "People liked [Cat] and they accepted her and they thought that I was like her. So I used to pretend to be a little more like her than I actually was."

So when it came time to do her music video for "The Way," Grande was quick to shed the Cat Valentine persona and be more herself. “I was like, 'Guys, there has to be a really distinct difference between me and my character,'" she said about making the video with Mac Miller. "I dyed my hair back to brown. I made out with a rapper in the video. I made the point I wanted to make. And I was excited to do so after so many years of pretending to be somebody else in front of a lot of people." Not wanting to pretend to be someone else is a pretty clear sign that acting might not be for you.

Anyway Grande's doing just fine as herself with her second studio album out, her awesome VMA collaborative performance with Nicki Minaj and Jessie J, and her new boo Big Sean by her side. Maybe acting isn't in her future, but it's great that she reached the point in her career of doing what she wants to do. And it includes plenty of theatrics too.