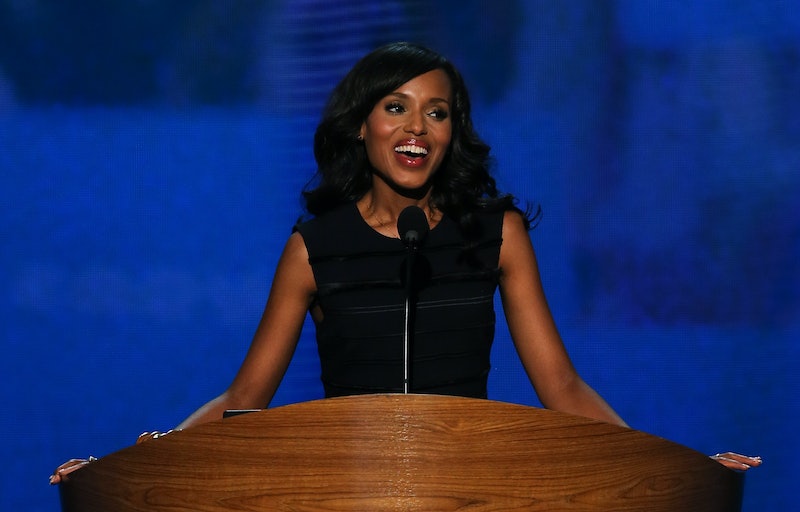 Olivia Pope might be a dubiously moraled fixer, but Scandal's Kerry Washington is all about awareness and healing. The 37-year-old actress is contributing to a discussion about domestic violence, and while it's an issue that's always important, it's especially potent in light of the footage of Ray Rice abusing his then-fiancée Janay Palmer. Washington recently filmed a PSA for the Allstate Foundation's Purple Purse campaign, which focuses on bringing awareness to a factor of domestic violence — the financial aspect. As Washington notes, "For many, many of those cases — 98 percent of those cases — the financial abuse is what keeps a woman trapped. Not being able to control your finances, destroying a woman’s credit, jeopardizing her job. One in four women will be a victim of domestic violence. Finances are almost always a weapon of choice."

Washington is an excellent spokesperson for the cause — last year, she married former NFL player Nnamdi Asomugha. But her voice doesn't only apply to the Ray Rice incident; recently, Christy Mack was brutally abused by MMA fighter Jon Koppenhaver, not to mention the hundreds of women who are victims of domestic violence daily, many of whom never report their abuses because fear inhibits them. In the face of the victim-blaming that has hung like an ugly cloud over the Rice incident, many brave women took to Twitter to discuss their own battles with abuse, using the hashtag #WhyIStayed.

Washington's PSA is great because it brings a recognizable, famous face to a worthy cause. For Purple Purse, she designed a limited-edition purple handbag that will be auctioned off, the proceeds going to support the campaign. She's a perfect figurehead for the foundation. Even on Scandal, a major storyline is Abby's history of domestic abuse, from which Olivia saved her and has a zero-tolerance policy for.

Washington, though deeply private about her personal life, lends her voice to many causes—she's also on the V-Day activist council, which seeks to end violence globally against women and girls. On the red carpet at the Emmys, she made a point to discuss, even briefly, the tragedy of the Michael Brown shooting. Washington is just as fierce and outspoken as her Scandal character, but in real life, she fights for the greater good, even though Pope sometimes strays into the dark side.

You can watch Washington discuss further the Purple Purse campaign in this interview with Detroit's WXYZ morning show.