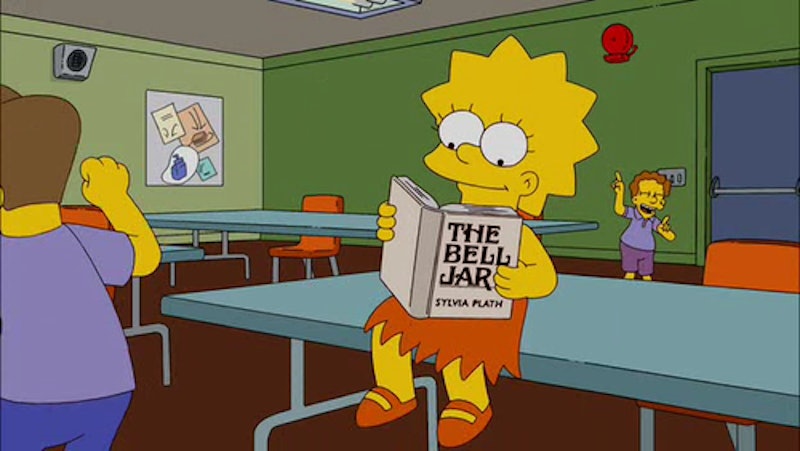 Now in its 25th year, The Simpsons is more than just America's longest-running sitcom and most dependable source for monorail-based humor. The show is one of our most impactful modern cultural institutions, shaping our views of the world through clever satire, humor, and ... reruns. So many reruns. And as anyone who tried to watch the entirety of FXX's recent 552-episode Simpsons marathon (and has the bed sores to prove it) can tell you, Lisa Simpson is simply the Springfieldian with all the brains.

For us girls who came of age in the '90s, she was also a crucial role model. Before Rory Gilmore, Buffy Summers, or your other favorite young adult feminist icons ever pontificated across your flat screen, Lisa was questioning authority, standing up for anyone who seemed oppressed (from injured animals to female pee-wee football players), and calling out sexism wherever she saw it — all the while wrestling with her own internal contradictions (ahhh, Malibu Stacy).

So, in honor of all the years we've spent laughing and learning along with the most consistent feminist voice on television, let's check out the reasons Lisa Simpson has been the most bad-ass feminist on television for 25 seasons (but, you know, really, only the first ten seasons count).

SHE FIGHTS against sexism

Lisa was at her most outspokenly feminist in "Lisa Vs. Malibu Stacy," going to great lengths to fight the pernicious influence of Talking Malibu Stacy by creating her own uplifting talking doll for girls. Sure, the doll was significantly less popular than Malibu Stacy's new hat, but Lisa's passionate ability to go to the mat for what she believed in — while still being a regular little girl — surly inspired many an elementary school playground rebellion against sexist double standards and boys who hogged the kickball.

she recognizes that social justice is complicated

Lisa was an intersectional feminist long before most of us knew that word — interested in the environment, animal rights, union issues, and much more, Lisa recognized that systems of oppression all work in concert with each other. And she wrote a catchy song about it! What did you do in second grade? What have you even done today? What have I even done today? None of us will ever be as cool as Lisa Simpson.

SHE'S NOT AFRAID TO HAVE UNPOPULAR OPINIONS

Though Lisa is about as popular as foot fungus on the Springfield Elementary social scene, when she decided to become a vegetarian, her social standing somehow dropped even lower. Though Lisa was tempted to give up on what she believed in because sticking to it was hard and exhausting, she eventually found like-minded friends who helped her get through. Did it help that that like-minded friend was Paul McCartney? Possibly. But the important part is that she showed us how to stand up for what we believe in, even if it makes us unpopular.

SHE EMBRACES HER CONTRADICTIONS

Malibu Stacy isn't anyone's idea of a feminist icon. But Lisa doesn't beat herself up over her passion for that plastic, monster-boobed doll, nor over her passion for non-threatening boy actors named Corey, or her desire to be thought of as cool by the kids at the beach. Lisa accepts that the silly things she loves are just as important as the big issues she devotes so much time to pondering, and that the mix of them keeps her life interesting.

Lisa loves authority ... in theory. If there weren't authorities, who would give her good grades? But Lisa doesn't blindly kiss authoritarian ass, like some Martin Princes that we know. Instead, Lisa interrogates all the authorities around her, listening closely to those she deems trust-worthy and raining righteous hellfire on those who turn up lacking. And she does great in school anyway. Eat that, Martin.

Lisa may still be in the single-digits, but she doesn't shy away from doing stuff on her own — whether it's taking a scary bus trip across town to go to the museum, or eating lunch pretty much every day. Lisa knows she's destined for better things, and she won't let the bastards grind her down.

SHE'S NOT AFRAID TO TELL HER TRUTH

We'll let Lisa say it herself, in what is perhaps the most transgressive one-off joke ever uttered on a network cartoon show: "Mom, I know your intentions are good, but aren’t the police the protective force that maintains the status quo for the wealthy elite? Don’t you think we ought to attack the roots of social problems instead of jamming people into overcrowded prisons?" Quite a mouthful for a show that your parents thought was the same as The Flinstones, right?

Lisa gets bitter. She gets angry. She throws fits and says stuff she doesn't mean. She gets jealous and overwhelmed and reacts poorly — much like every human being on the planet.

A lot of the time, feminists in popular culture are held to some higher standard than every other human being on the planet. They're expected to show off how level-headed and rational and reasonable feminism is, how its demands aren't scary, and won't mess with the status quo.

Lisa isn't like that. Lisa's a regular, troubled, confused human being, with lots of regular, confused trouble in her life. Through her character, we're reminded that that's OK.

Simpson 2016! I mean, if these characters were aging in real time, she'd be just about old enough, right?

More like this
The 'Hocus Pocus' Sequel Finally Has A Release Date & It Makes Total Sense
By Shannon Barbour and Radhika Menon
Sandra Bullock, Girlboss Extraordinaire
By Matt Harkins & Viviana Olen
Penn Badgley & Leighton Meester Met On A Horror Movie Set Before 'Gossip Girl'
By Jake Viswanath
Selena Gomez’s ‘SNL’ Hosting Debut Had Twitter Gushing Over ‘Barney’ & Wigs
By Stephanie Topacio Long
Get Even More From Bustle — Sign Up For The Newsletter