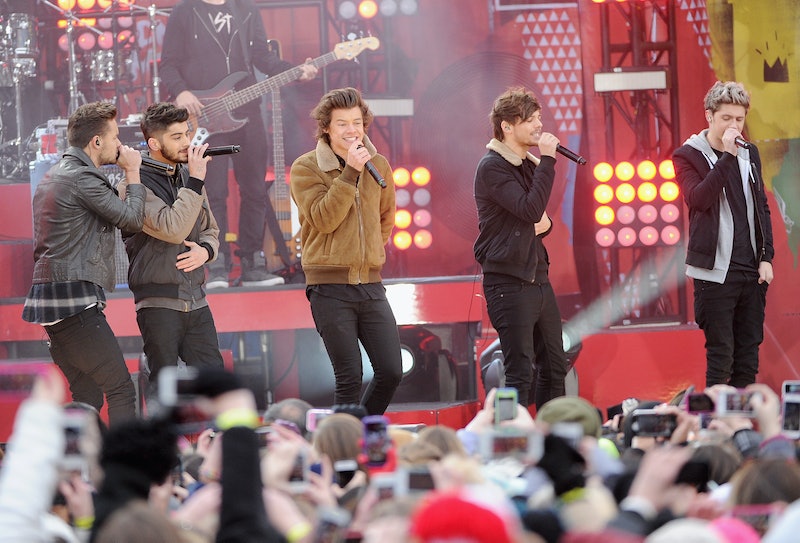 Last Friday, I woke up with a mission: find relatively cheap tickets on StubHub for that night’s One Direction and 5 Seconds of Summer Rose Bowl concert. I didn’t know if that was a realistic goal, but I figured it was worth a shot. I am glad I trusted my gut, because minutes after I pulled up the event page, I found them: seats with a decent enough view retailing for $25 less than the original ticket price. Holy shit. I texted my boyfriend to let him know what glory I’d happened upon. I asked him if he’d be my date. He is usually game for a spur-of-the-moment adventure (and yes, a 1D concert is an adventure), but I fully expected him to shut it down. Yeah, he enjoys pop music and has accompanied me to a few Top 40 radio station concerts, but boy band tours aren’t exactly his jam.

Before he could change his mind, I punched in my credit card information.

Fast-forward to that night: After a warp-speed dinner at BJ's Brewhouse, we were standing at the Rose Bowl’s front gates. The crowd’s high-pitched shrieks were audible from the parking lot. My boyfriend looked at me as we walked to our section. His eyes widened. I grinned at him like a maniac. I can’t believe this is happening, I thought. I ate an appetizer sampler platter for dinner and now I’m at one of the biggest pop concerts of the year. My 11-year-old self would be so proud of how I turned out.

As we shuffled down the row to our seats, a mom clutching a tote overflowing with 1D tour merchandise smiled and laughed at us. She was not wrong: Standing among the tens of thousands of young girls in homemade “MRS. HORAN” T-shirts and One Direction headscarves, my boyfriend and I stuck out like sore thumbs. While there were other women around our age at the concert, I did not see any other twentysomething adult women with their twentysomething adult boyfriends. And I didn’t see any men my boyfriend’s age. There were some dads and a handful of teen boys, but no dudes in their 20s.

“I feel like I shouldn’t be here,” my boyfriend whispered to me as we found our seats. “I feel like my presence is ruining everyone’s night.” I laughed and told him to chill out. At that moment, 5SOS bassist Calum Hood’s face appeared on the screen, and the teen standing on the other side of my boyfriend emitted a noise that could shatter airplane glass. My boyfriend calmly bowed his head and covered his left ear. He would repeat this move throughout the night.

When 1D first took the stage, I clutched my boyfriend's arm and thought, I'm so glad I never grew out of this. It'd been 14 years since I'd attended a boy band concert, but I felt at home among the throngs of hysterical fans. I didn't scream out loud and weep like I did at the 'N Sync concerts, but I did scream and weep in my heart.

I loved the concert. Of course I did. Not only did 5SOS and 1D sound great, but the entire experience was one for the ages. I mean, between the sets, the crowd did "The Macarena" together and I about fainted. It was so glorious. And a shout-out to everyone in our section who uttered some positively beautiful shit. Here are some of the quotes I overheard during the concert:

My boyfriend was absolutely right: The concert was overwhelming. And I wouldn't have it any other way.

After One Direction ended the show with "Best Song Ever," the crowd began the cramped and tedious journey out of the Rose Bowl. One security guard nodded at my boyfriend and said, "This guy had a great night." My boyfriend gave him a small smile. He was exhausted, as was I, and we still had a 40-minute uphill walk to our car.

With aching feet and tired eyes, we finally reached the front door of our apartment at 12:45 a.m. The moment we hit our bed, we passed out and didn't stir until 11:00 a.m. Neither of us could remember the last time we slept in that late. It was the complete "feel like a tween again" experience.