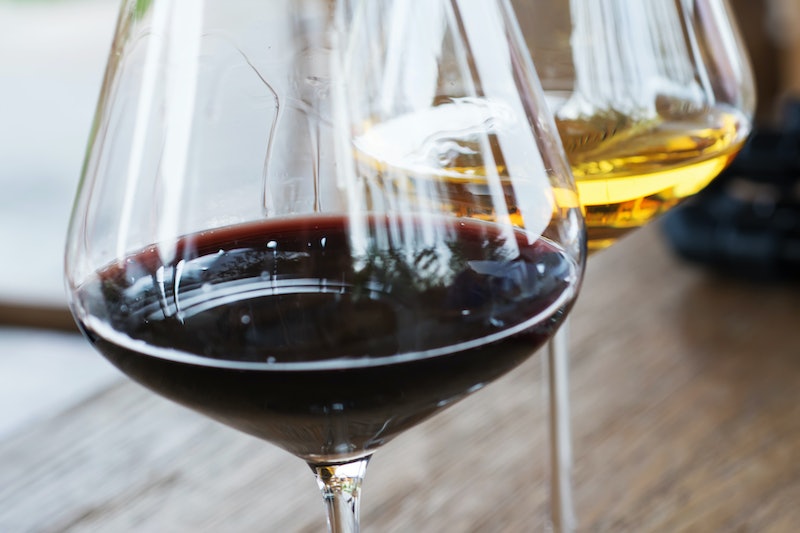 Finally, someone has answered the age-old question that has been weighing on everyone's mind: Do Americans prefer red or white wine? For all of you white wine drinkers out there, myself included, it looks as though we are outnumbered. A new study by Naked Wines found that in all states except Nebraska, Kansas, and Iowa, wine drinkers seem to prefer red over white.

While this particular study isn't without a few problems, (for one thing, it was conducted by a single company that offers a limited selection of wines reporting on their customers' preferences), there are other surveys to back it up. The Washington Post reports that this new data is supported by another survey by online wine retailer Corkguru conducted last spring, which found that 58 percent of people preferred red, as well as a 2013 study by California Polytechnic State University and a 2008 paper produced by the American Associate of Wine Economics, which all came to the same conclusion: Americans like their red wine the best.

That's not to say red wine lovers are on their way toward total world domination. In fact, according to the Naked Wines study, it was a pretty tight race in some states. In both North Dakota and New York, residents were discovered to drink an equal amount of red and white wine, and in most other states, wine drinkers only consumed less than 10 percent more red wine than white.

Mic points out that health wise, this wine preference is smart. Red wine contains antioxidants that can help prevent heart disease, and flavonoids and resveratrol that can reduce cholesterol. Calorie wise, however, both red and white wine are a good choice, with each containing around 20 calories per ounce (this excludes dessert wine).

Regardless, red wine drinkers can enjoy their power of majority. I’ll stick with my whites.

More like this
An Honest Review Of The TikTok-Famous WalkingPad
By Kaitlyn Wylde
TikTok's Favorite Bartender Thinks Mimosas & Bloody Marys Are Out For Brunch
By Alexis Morillo
Are We Drinking Rosé All Wrong?
By Sheila Yasmin Marikar
Meet The Spice Company Founder Who Sees Chai As A Metaphor
By Madhuri Sathish-Van Atta
Get Even More From Bustle — Sign Up For The Newsletter