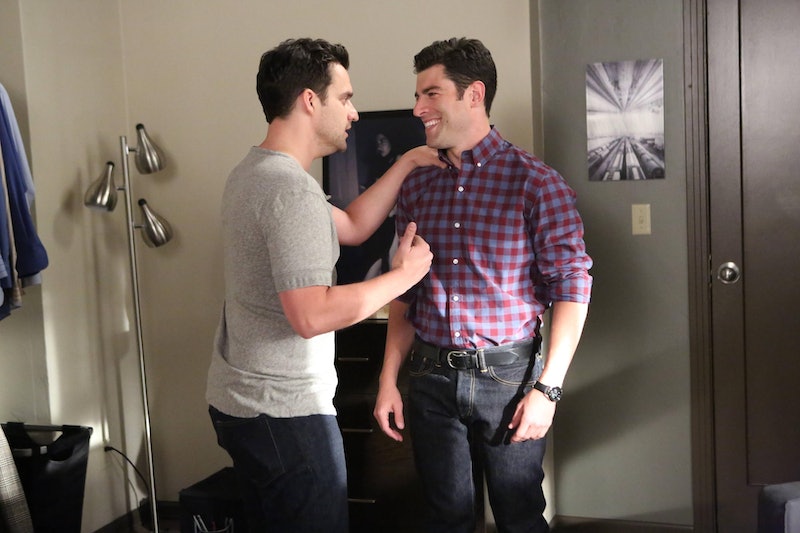 The third season of New Girl may have been something of a mixed bag, but there were plenty of reasons to keep coming back every week. One of the best ones was the best-friendship between Nick and Schmidt, which no amount of weird love triangles or unsuccessful guest stars can ruin. While Nick and Jess' relationship suffered because they ended up not knowing one another well enough to bear fruitful story lines, Nick and Schmidt know too much about one another. They're a classic Odd Couple. One's messy, one has a near clinical aversion to disorganization. One's obsessive, one has never had a credit card or permanent address. And together, they've managed to form one of the best and tightest bromances on TV, that we only hope to see more of when New Girl returns for Season 4 on Tuesday.

Schmidt and Nick have a lot to look back on in the past three seasons, and showrunner Liz Meriwether promised Hitfix that there's plenty more to look forward to. The best part of their bromance is that they have so many important life lessons applicable to the friendships of us simple television viewers. Nick and Schmidt are like the Yin and Yang of bros. And just like the classic black-and-white symbol, they teach us that the most important value in a classic bromance is balance.

Note Schmidt's reaction to Nick's assertion that a whole day of television-watching is acceptable. It's the expression on people's faces the world over when their significant other says something completely absurd. He knows it's pointless to respond, but he just has to express his skepticism.

Sometimes you just gotta pound it out. Even if you're not in agreement about whether or not to do the explosion at the end, it doesn't matter, so long as you can connect fists without looking.

One of the few ways the writers were able to effectively use Schmidt in Season 3 was as a sarcastic foil for the Nick/Jess pairing. His barely veiled disgust at their PDA almost made the couple seem like an entertaining idea.

There Are No Words

Between real bromance partners, one look is all you need to get your point across. Look at Schmidt's glee! And Nick's shock? It's adorable.

Every Once in a While, Make It a Trio

Winston and Nick's long term friendship — though not a true bromance, it's more of a brotherhood — was worked into Nick and Schmidt's relationship in Season 3. Winston was the third wheel, there to spice things up. I mean, the kid wanted to get his cat laid.

Teaching One Another Things

To Schmidt, this was a lesson in how to be seductive. To Nick, it's a cautionary tale about gyrating while making an inappropriate level of eye contact.

Pretending to Be Michael Keaton

Schmidt's imaginary friendship with the one true Batman (yeah, that's right, Keaton's the man) wasn't much of an episode, but it made for one of the best showcases of their friendship. Nick wrote years worth of pen pal letters to Schmidt pretending to be Michael Keaton, which is the longest Nick has worked at anything.

Schmidt, uncharacteristically not sentimental when Nick reminds him that they've become close enough that he doesn't need Keaton anymore, instead of getting sappy, got snappy and went for a sharp comeback. He's even rocking Nick's characteristic turtle face.

Then they just do this face at one another, and it's awesome.

If that expression turns up in Season 4, consider New Girl back on top of its game.