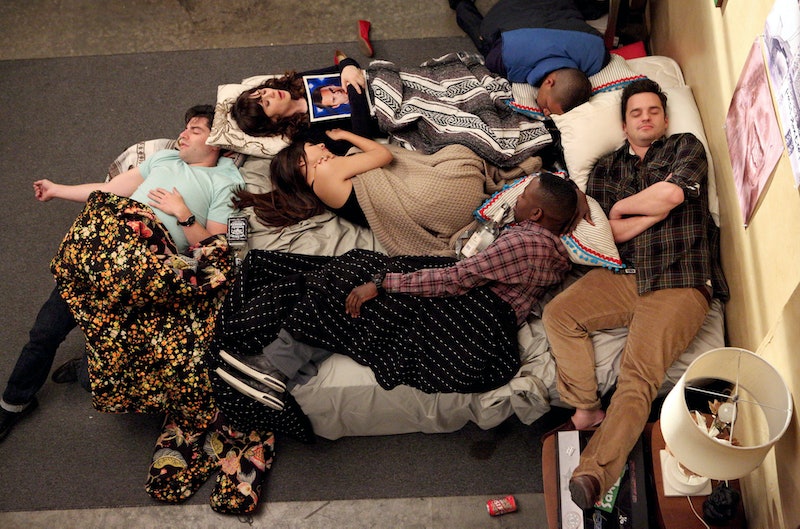 I love me some Nick and Jess, but Season 3 of New Girl will go down in history as the rise and fall of the pair. With Season 4 premiering on Tuesday, Sept. 16, we'll be seeing both Jess and Nick move on — for better or worse. Season 3 started with the two of them escaping to Mexico after Cece's failed wedding. They dated for almost the entirety of the season, with forceful bank account openings, awkward "I love yous," a Prince cameo, and all the other normal stuff that goes into a relationship. Yet during a hungover discussion after a rowdy game of True American (is there ever a non-rowdy game of True American?), the pair broke up.

They tried to mend things as friends in the Season 3 finale and with the help of the gang, they got to have some blunt conversations about the transition from roommates to boyfriend and girlfriend — and back again. But there is much more to New Girl than the romance of Jess and Nick. So besides their dynamic, what happened to Schmidt, Winston, Cece, and Coach (!) in Season 3? Let's take a look to get you all caught up for Season 4.

Coach got to come back to the show after Happy Endings was canceled (which is sad, but good news for both New Girl and The Mindy Project, as the latter also snagged Adam Pally). At first, I wasn't sure if he was going to be a regular, but once he came back, he has stayed on in full force and slipped right into the dynamic with only a few snags. And Damon Wayans, Jr. has been officially made a full-time cast member for Season 4.

Jess had the hardest time with the reintroduction of Coach. It didn't help that Coach returned after a rough breakup and was trying to get Nick to be completely reckless. Jess was also desperate for him to be her friend and pretended to love basketball to win him over. She successfully got Coach a job at her school (appropriately, as a coach) and though she had to fire him in the same episode, she worked it out and got him rehired.

Schmidt Is Single — But Pining for Cece

After two-timing the two women he cared about during the beginning of Season 3 (Elizabeth and Cece), Schmidt was left alone. And he deserved it for being even more of an asshole than usual. He moved out of the loft for a bit and eventually got with Jess' fireball sister Abby (Linda Cardellini). But the intense fling was short-lived.

Since then, he has been biding his time and being respectful (as much as Schmidt can be) of Cece, but in the Season 3 finale, he was making efforts to win her back. And as Bustle writer Kelly Schremph noticed, based on a photo from that episode, it looks like Cece may be interested in Schmidt again herself.

The promo for the first episode of Season 4 shows Schmidt convincing the group to try to hookup with someone at the last wedding of the summer, so I'm sure if Cece and Schmidt do reunite romantically, it won't be right away.

Winston Is Going To Be a Cop

Yes, you read that right. The absolutely ridiculous Winston did some soul searching in Season 3 to see what he really wanted to do with his life and he decided he wanted to become a police officer. He passed his police academy entrance exam, so we are bound to get some hilarity out of Winston in police training.

Besides the big life change, Winston also got the most adorable cat ever, Ferguson. He was cat sitting for the girl he was dating — Daisy — when he discovered she was sleeping with someone else. So he took the cat and bonded with Ferguson on a really intimate level.

Although Winston rarely gets a substainal storyline, I find myself cracking up at him the most. He's completely wacky and the fact that he's now going to be a wacky police officer is kind of awesome. Maybe Ferguson can become his police cat.

Cece had a rough year, starting with calling off her arranged marriage for Schmidt. The two began dating again, but she found out he was cheating on her with his ex Elizabeth. After some lackluster dating with Coach and struggling to find work she likes, Cece turned to the bar. Although far from a natural at it, she joined Nick in bartending at Clyde's (and actually kind of took over the helm of the bar scenes since we didn't see Nick working there too much). It was while working that she met her younger, Australian boyfriend Buster.

Schmidt did help Cece study for the GED towards the end of Season 3 and she passed (yay Cece!), so her stint as a bartender will probably be over in Season 4 as she tries to find some career fulfillment like Winston. And there's definitely the chance for Cece and Schmidt to reunite too. Buster is clearly not going to be around for too much longer.

We'll see how the group fares in Season 4 , but if it sounds like they are growing up too much, don't worry. They look like they will still be as idiotic as ever.

More like this
David Schwimmer Doesn't Remember This Classic 'Friends' Episode
By Sam Ramsden
Netflix Just Revealed When 'Never Have I Ever' Seasons 3 Will Premiere
By Gretchen Smail and Alyssa Lapid
'Unforgotten's Brand New Character Joins At A Pivotal Moment For S5
By Bustle UK
'Bosch: Legacy 'Is Bringing Its Beloved Main Character Back
By Kadin Burnett
Get Even More From Bustle — Sign Up For The Newsletter