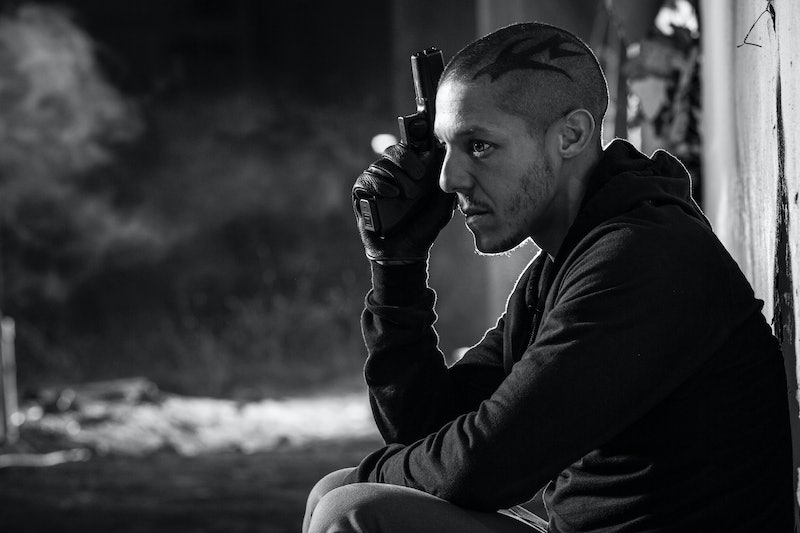 So Season 7 of Sons of Anarchy is clearly going into rage mode. The hour and 45-minute Sons of Anarchy premiere last Tuesday made that pretty clear. The list of people whose deaths are looming is growing on the daily. If the final season of SoA was a Migos song we'd all be like,"Dead people stand to the left. More dead people stand to the right." That being said, Juice is almost certainly going to die. Jax is indeed going to knock him out like flight night.

Now that Jax has found out about Juice's betrayal, it's clear that the club member's days are numbered, because yeah, the blond prince is indeed out for blood. It doesn't help that just recently, the show's executive producer Paris Barclay pretty much signed Juice's presupposed death warrant for E! News. Of the die-hard SoA fan base, he said, "They send me tweets about, like, 'Please save Juice!' I'm doing everything I can, but it may be in vain, I have to warn you." Excuse me, what? Then try harder, Barclay. Put your back into it. But wait there's more, Barclay went on to say, "I don't think you can expect Juice to make it to the end."

For all the Juicy Juice lovers out there, any conclusion that involves a dead Juice is just one that will not do. And it's not simply because we want to see Theo Rossi's face on screen. (*Quietly chants "Keep Juice Alive. Keep Juice Alive."*) Let's face it: Juice is SAMCRO's problem child and he needs our love. Case and point:

Juice haters, hear me out. The man deserves a(nother) chance. Here's why:

Juice's betrayal to SAMCRO in Season 4 thoroughly tainted his image in the eyes of SoA fans. One is rarely in love or in hate with Juice's character. After all, he's killed a club member, he's personally betrayed Jax in an Oxycontin induced haze by telling Nero about Darvany's death, he's also very much disgraced the SAMCRO name by ratting on the club. But time and time again, Juice has proven his loyalty to the club.

Rossi spoke to EW about his character, saying "The thing with Juice — he's never ever done anything without trying to protect the club in mind. Everything he did was to try to help the club. And then his conscience just gets the best of him." Like most of the club members, we are constantly left to contemplate if deep down, Juice is good for the club or not. His moral compass is led by his loyalty to SAMCRO, even though his actions and their consequences tend to harm the club more than help. Juice is one to even try to commit suicide after snitching on his bros in Season 4. His SAMCRO blood runs deep. The club is his life.

Since Season 4, Juice's life has been bleak. Even Rossi said, in that same EW interview, that he hopes Juice finds some peace. I'd like to argue that that peace doesn't necessarily have to translate into death. Maybe the club could work together to help Juice redeem himself. Maybe they could talk it out and forgive one another for the sins they've committed against each other. Maybe they could get a club therapist and just express their feelings healthfully. Is that not likely? Well I know of one club where good ol' fashioned friendship was revered over all transgressions. Can we all spell, M-I-C-K-E-Y M-O-U-S-E?

Juice, I bet Ryan would take you in.

Because if Juice dies, Gemma needs to go down with him

You're a spinner of webs of dirty, dirty lies, Gemma. Hey, Jax — spoiler alert — you don't know it yet but it was your mamma who killed your wifey. Brutally. With a grill fork. You know who covered that for her? Juice. And if we're going to argue that Gemma is hiding the reality of Tara's death is a good thing, then by the associative property of television murders, Juice should get pardoned as well. Because the second Juice saw what had happened, he offed Eli, who was about to report it. He didn't do that with himself in mind; he did that with the nothing but loyalty to SAMCRO in mind.

...And because FX needs to let that hawk breathe

If no one else is going to say it, I will. No one else can pull off that peek-a-boo-I'm-barely-there-mini-mohawk like Theo Rossi. That deserves to stay on air as long as possible. I don't know if anyone else has thought about it but if Juice dies, so does that follicular masterpiece. Keep that hawk alive.