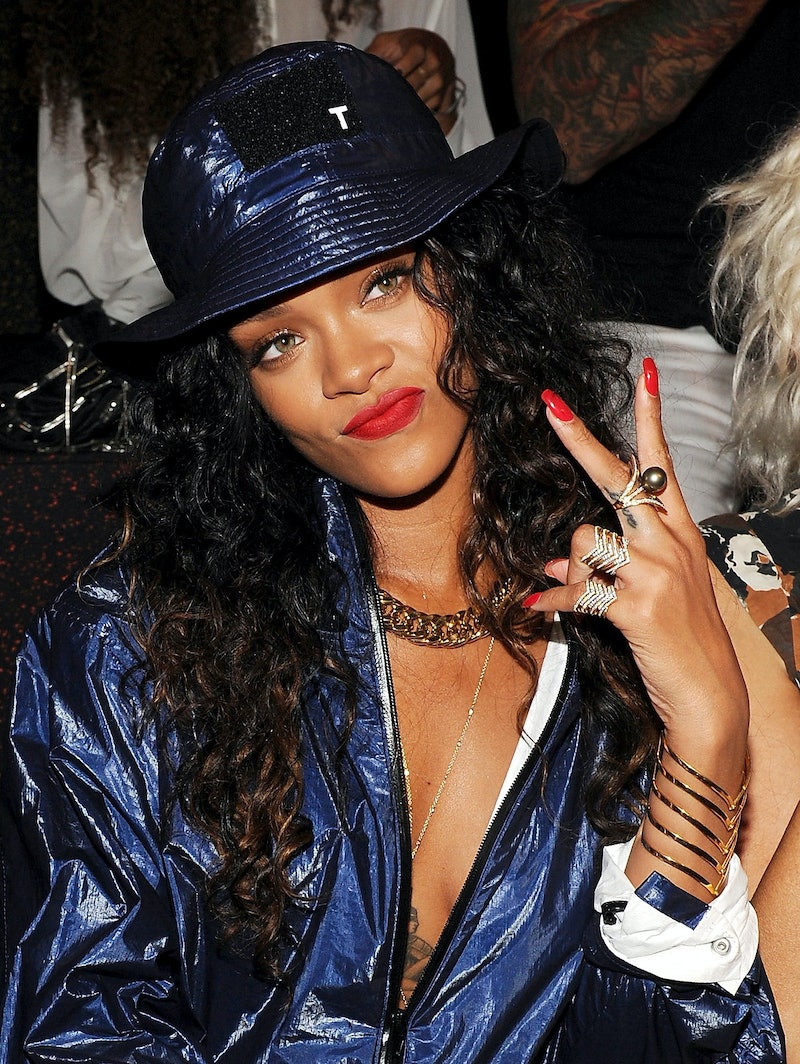 When CBS announced that they were pulling Rihanna's pre-taped musical performance from the Thursday Night Football game between the Ravens and the Steelers on Sept. 11, it could have been for a multitude of reasons. Maybe they were worried she'd perform in nothing but her CFDA gown. Maybe they were scared she'd perform in nothing at all, as RiRi is wanton to do. Alas, the network's reasoning for taking the "Monster" superstar off the line-up was much worse. In the wake of the recent Ray Rice domestic abuse scandal, CBS apparently decided that having the singer, who is the victim of a high-profile domestic assault herself, wouldn't send the right message during such a serious broadcast. And now Rihanna has responded to CBS via Twitter and she is far from happy.

CBS' reasoning for pulling the performance was explained by CBS Sports Chairman Sean McManus. According to McManus, the network didn't want to deal with any ruffled feathers or potential backlash:

We thought journalistically and from a tone standpoint, we needed to have the appropriate tone coverage.

And how is that tone appropriate, CBS? How is publicly punishing the victim of past abuse journalistically sending the right message to your viewers? Rihanna didn't immediately give any statements after CBS made their decision known, but once it was decided they wanted her segment to air during this Thursday's broadcast instead, she slammed them on Twitter.

Although CBS is sticking to their excuse that pulling Rihanna's performance was tone deaf solely due to the fact they didn't want to feature a pop star performing in the midst of such a giant scandal and not anything to do with Rihanna personally, the coincidence is hard to ignore. Instead of the planned musical segment featuring Rihanna's "Run This Town" and an appearance from actor Don Cheadle, the pre-show began with a report from CBS This Morning co-host Norah O’Donnell, who had interviewed NFL Commissioner Roger Goodell the previous day.

Obviously this is an extremely delicate and unfortunate situation for CBS, and the balance between satisfying football fans and dealing with a massive scandal is tricky to maintain, to say the least. Then again, what Rihanna went through with the media in 2009 after the highly publicized assault by then-boyfriend Chris Brown is very similar to what Janay Rice is experiencing now, and CBS' decision to effectively silence the singer because of it comes across as a giant mistake. While there's currently no telling whether her song will still be used for future games or broadcasts, it's clear from her tweets that she won't be dealing with the situation quietly.

More like this
Rihanna Is A Mom Now After Giving Birth To Her First Baby With A$AP Rocky
By Ananya Panchal and Jake Viswanath
Rihanna Wore A Sparkling Lingerie Look For Date Night With A$AP Rocky
By Allie Fasanella
Jake Daniels Just Became The UK’s First Active Football Player To Come Out As Gay Since 1990
By Sam Ramsden
What Is Jeanie Buss' Net Worth? The Lakers President Is Uber Rich
By Hugh McIntyre
Get Even More From Bustle — Sign Up For The Newsletter