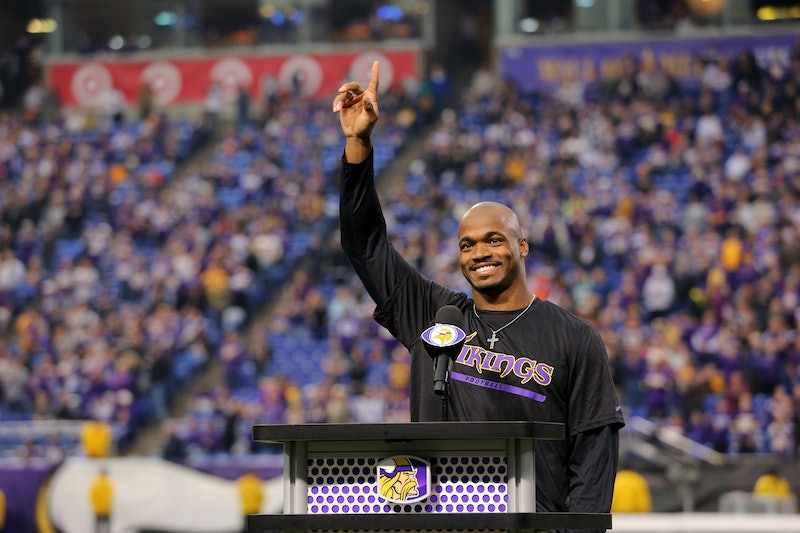 After benching him for Sunday's game against the New England Patriots, the Minnesota Vikings reactivated running back Adrian Peterson — who allegedly abused his 4-year-old son — on Monday. But a new case has surfaced that may once again place Peterson's standing in jeopardy. According to Houston's KHOU-TV, Adrian Peterson was accused of injuring another child under the guise of punishment.

KHOU-TV reports that the mother of a 4-year-old boy — who is another son of Peterson's — raised these claims on Monday, just hours after Peterson issued an apology for his crimes. According to the woman, who remains unidentified, Peterson hit their son in the head while administering punishment. The strike allegedly left a scar over the boy's right eye.

The Houston station cites text message exchanges between Peterson and the boy's mother, as well as a photograph of the 4-year-old with a head wound. According to the text messages obtained, Peterson admitted to hitting the boy in the car. "I felt so bad. But he did it his self," Peterson said via text.

The mother asked what Peterson used to hit the child, but he didn't say. When she expressed she was "sensitive" about her son being hit, Peterson reportedly responded: "You tripping if you want him, come get him. I'm not about to be getting questioned down like you CPS."

The abuse reportedly took place in June 2013, when the boy was visiting Peterson at his Texas home. The woman filed a claim with Child Protective Services at that time, but no charges were brought against Peterson.

The allegation of another investigation into Adrian Peterson is simply not true. The allegation is more than one year old and authorities took no action. An adult witness admittedly insists Adrian did nothing inappropriate with his son.

The Vikings also released a statement on Monday night, and said they'll defer all media questions to Hardin:

As part of the information we have gathered throughout this process, we were made aware of an allegation from 2013 in which authorities took no action against Adrian.

The Vikings deactivated Peterson from their roster after the popular running back was indicted by a Texas grand jury on Friday on charges of reckless or negligent injury to a child. He was booked and release early Saturday morning, and sat out Sunday's football game. After being reinstated by the Vikings on Monday, Peterson issued an apology for harming his son:

I have learned a lot and have had to reevaluate how I discipline my son going forward. But deep in my heart I have always believed I could have been one of those kids that was lost in the streets without the discipline instilled in me by my parents and other relatives. I have always believed that the way my parents disciplined me has a great deal to do with the success I have enjoyed as a man. I love my son and I will continue to become a better parent and learn from any mistakes I ever make.

Responses to Peterson's indictment have been varied, with former NBA player Charles Barkley defending the practice of hitting children as punishment. Meanwhile, ESPN's Cris Carter, a former Vikings player, decried Peterson's actions on Sunday, saying the Vikings did the right thing by taking him off the field.

More like this
Michigan’s Governor Is “Going To Fight Like Hell” To Protect Abortion Access
By Andrea Zelinski
23 Abortion Funds In States With Trigger Bans To Donate To
By Emma Carey
What Is Jeanie Buss' Net Worth? The Lakers President Is Uber Rich
By Hugh McIntyre
Chelsea Woody On Shattering Stereotypes In Surfing
By Leah Groth
Get Even More From Bustle — Sign Up For The Newsletter