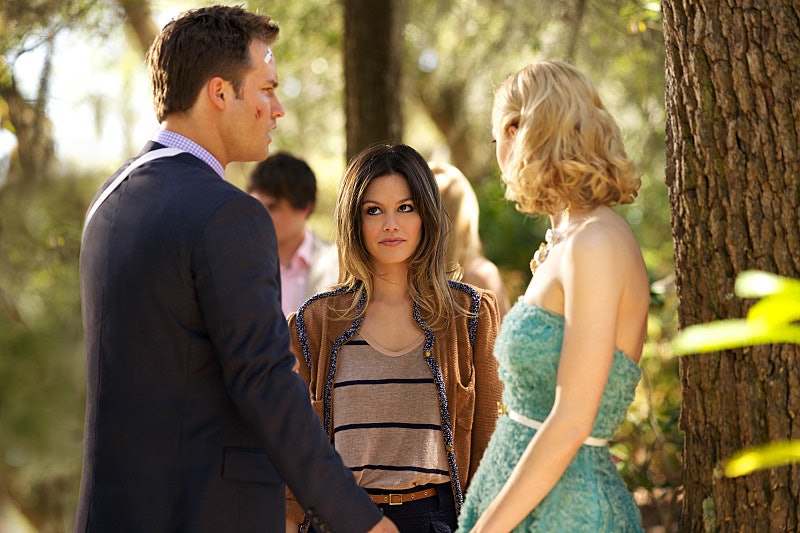 But isn't this show about Zoe Hart? There can't be two Zoe Harts, that's just absurd. We still aren't sure when Hart of Dixie Season 4 will premiere, but The CW just dropped yet another Hart of Dixie Season 4 casting spoiler. According to TVLine, Hart of Dixie is casting twenty-something NYC attorney to play "Zoe 2.0" which is weird because the original Zoe Hart has a pretty huge pregnancy storyline in the upcoming season. Obviously this "new Zoe," whose name is actually Olivia Green, isn't going to replace Rachel Bilson's title character, but she might steal Zoe Hart's man. Could this be yet another way that Zade won't make it in Dixie Season 4? Or maybe they're bringing Olivia in for George Tucker?

TVLine revealed that Olivia is "a very attractive, fashionable, quick-witted, New York attorney struggling to make sense of life in the quaint Alabama burg." Which is exactly what Zoe Hart was way back in Season 1 when she arrived in Bluebell, distressed, and promptly got drunk off of cheap, gas station white wine. So, why go back here again? Well, there are a few good reasons to bring in some new blood, the first of which being romance.

We left off at the end of Dixie Season 3 with George and Lavon both thinking they were in love with Lemon. Now, I know that they've both come to their senses in the long months that've already passed while we wait for Dixie Season 4. I also know that Lavon and Annabeth belong together and that they'll figure that out eventually. Which leaves us with Bluebell's three other eligible bachelors — Wade, George, and Joel.

I know what you're thinking, "Why the heck is Joel included?" Well, Joel did turn back up in the Season 3 finale even though he and Zoe were broken up. So, it's definitely safe to assume that he might return again in Season 4, with a new NYC girlfriend — Olivia. This would be the easiest, least invasive introduction of Olivia Green into Bluebell. Joel decides to move back to Bluebell because that's where Grandma Sylvie after spending time in New York and convinces his new girlfriend to move there with him. It also keeps the door open for Zoe to become friends with Olivia, rather than rivals, considering she's been in Olivia shoes before.

But, I highly doubt that Dixie will go that easy on the crew in Bluebell. There's another possibility that Olivia could be coming down from New York to work with George Tucker to finally squash the acquisition of Bluebell. At which point, the character will fall for either George — who'll be down-and-out after getting rejected by Tansy and thinking he missed his last chance with Lemon — and finally fulfill the lost storyline from Season 1 where Zoe was in love with George. OR in a sad turn, Olivia could end up striking up a relationship with Wade, forcing Zade fans to wait even longer for the couple to reunite before Dixie's series finale.

Either way, Dixie wouldn't just add a new character to this series without having them engage romantically with one of its series regulars. I mean, look at Joel and Vivian from Season 3? Romance is always the reason for a new face in Bluebell, it's just a matter of who "Zoe 2.0" will go after and how big the consequences will be.

More like this
Netflix Just Revealed When 'Never Have I Ever' Seasons 3 Will Premiere
By Gretchen Smail and Alyssa Lapid
'Unforgotten's Brand New Character Joins At A Pivotal Moment For S5
By Bustle UK
'Bridgerton' Season 3 Includes A Major Cast Shake-Up
By Grace Wehniainen
Will The Pentaverate Get A Season 2?
By Kadin Burnett
Get Even More From Bustle — Sign Up For The Newsletter