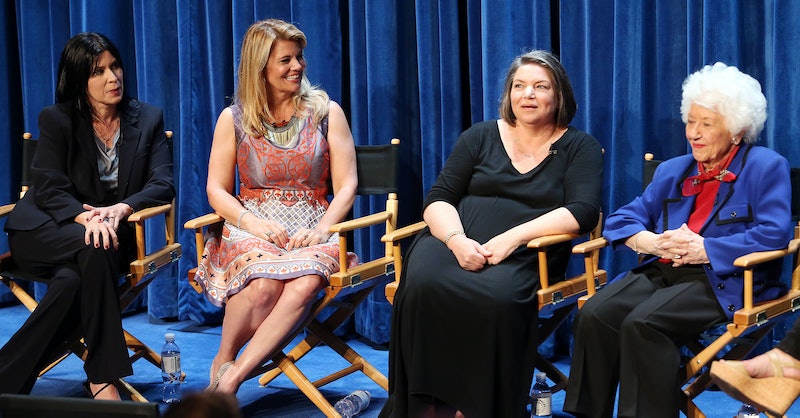 It seems that the TV shows of yesteryear are really playing on the nostalgia factor recently: Only days after the Married With Children cast got together for a long-awaited reunion in Hollywood to celebrate star Katey Sagal receiving a star on the Hollywood Walk of Fame, another retro TV cast has reunited after decades to the delight of fans everywhere. This time, it's the The Facts of Life cast, who reunited for the show's 35-year anniversary at the Paley Center for Media in LA for a talk about the series and its legacy with an audience of fans. This is a significant one, too — it's one of the first times the cast has been together since the show ended nearly 26 years ago, apart from 2001's The Facts of Life reunion special on ABC.

Mostly the entire cast was present for the special event: Lisa Whelchel (Blair Warner), Nancy McKeon (Jo Polniaczek), Charlotte Rae (Edna Garrett), Mindy Cohn (Natalie Green), and Geri Jewell ("Cousin" Geri) were all there, and the only lady who couldn't be present, Kim Fields (Tootie Ramsey), filmed a video message for the event regardless.

The cast reminisced on the series, which ran for nine years on NBC between 1979 and 1988, including the time George Clooney guest-starred — and that Whelchel, whose character Blair had a storyline with him, has no recollection of their scenes together — as well as the fact that there was hardly any behind-the-scenes drama between the girls during the series' run.

As far as reunions go, this was a pretty epic one. And, it also begs the question: What has the cast been up to in the near-26 years since the show ended?

Apart from forgetting the time she made out with George Clooney on The Facts of Life, Lisa Whelchel has been up to a lot since the series ended its run in 1988. While it hasn't all been acting-focused, Whelchel has been a regular speaker Women of Faith Christian conferences and other speaking events at churches, and she's written a total of 10 books on a variety of topics including motherhood and self-help subjects. Additionally, she participated in a 2012 season of Survivor: Philippines, during which time she unfortunately contracted West Nile virus — but also managed to nab a runner-up spot. Glass half full?

Here's a pretty classic Hollywood "what-if" story: After The Facts of Life ended in '88, McKeon actually auditioned for the role of Monica Geller on Friends in 1994, and got pretty close to nabbing it too. Of course, the role eventually went to Courteney Cox, something with McKeon has stated she's happy about because "Now, I can't see anybody playing the role, not even myself." More recently McKeon has had roles in The Division, as Demi Lovato's mother in Sonny With a Chance.

One of the most accomplished actresses to join the series at the time it began, Charlotte Rae had an active career in the industry before and after The Facts of Life's nine-year run. Apart from Tony nominations and a major Broadway career, Rae is a veteran of the small screen, and, after The Facts of Life, appeared in a handful of roles on well-known shows like The King of Queens, Pretty Little Liars, and ER. She also fought a public battle with pancreatic cancer, and, thankfully, as of 2014 is fully cancer-free.

Though Cohn may be best known appearance-wise for her role as Natalie in The Facts of Life, her voice may be better known for something entirely different: Since the series ended (and even currently), Cohn has been the voice of Velma in the Scooby-Doo franchise since 2002. Is it too obvious to end this blurb with a heartfelt "jinkies"?

Jewell wasn't on the show for as long as the other girls, but her character "cousin Geri" certainly made her mark on the series regardless. At the time, The Facts of Life was the first series to include a character suffering from the debilitating disease of cerebral palsy — and Jewell herself was one of the first actresses with a disability like cerebral palsy to have a regular, consistent role on a television show. Since leaving the show, Jewell released an autobiography in 2011, has been a strong advocate for both raising awareness for cerebral palsy, as well as LGBT issues (Jewell herself identifies as lesbian). She also had a role in the HBO series Deadwood between 2004 and 2006, as well as guest roles in shows like Glee and Alcatraz.

Since The Facts of Life ended, Fields has tried her hand at a few different Hollywood career paths, including music and directing. Since 2003, she's performed under the stage name "Blondielocks," and has directed a handful of episodes for shows like Kenan & Kel, Tyler Perry's Meet the Browns, and Let's Stay Together. She also appeared in The Division in 2004 (the series that starred her former The Facts of Life co-star McKeon), and she had a role in 2012's What to Expect When You're Expecting.