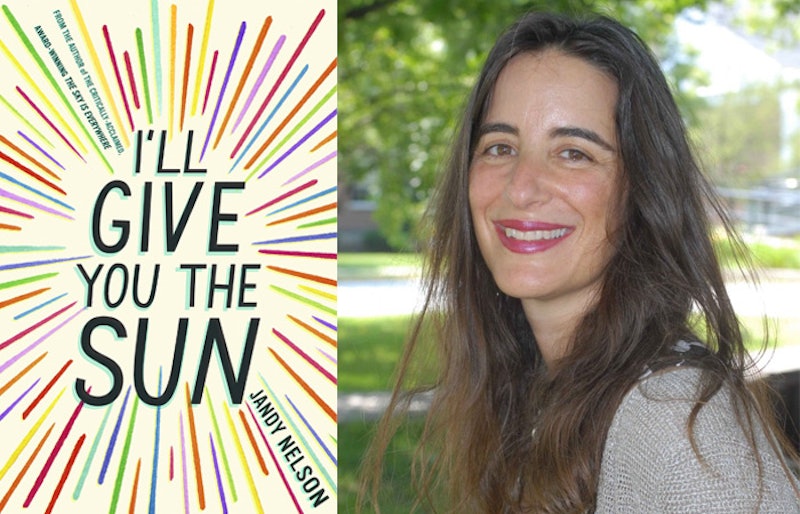 At the beginning of the month, I claimed Jandy Nelson's YA novel I'll Give You The Sun was going to be big, and I'm patting myself on the back. It's one of those rare stories that keeps you immersed in the pages, not flipping them quickly to find out what happens, but meditating on them because it makes you think about those big themes: life, art, family, growing up, fate.

I'll Give You The Sun tells the story of twins, a boy and a girl named Noah and Jude, from two time periods and each of their perspectives. It's not easily described otherwise in an elevator pitch. It's just a story particular people, in a particular time, under particular circumstances — but it's so well-told it feels like it's happening to all of us, everywhere, all at once.

Because it's so hard to describe in a quick sentence or paragraph, let's break it down into the five ways in which it shines.

In YA, so often stories are told with family, particularly brothers and sisters, in a background role. Not so with Nelson's novel. If you'd argue that it primarily centers on something, it's family. And how even broken people can become whole again by reigniting connections within the circle of people that began it all with them: their family.

Mostly, we're talking about Noah and Jude — or NoahandJude, as they are often referred to because of how close the twins are.

The twins play games where they guess who their family members would safe first in case of emergency (the twins would save each other; their father would save Jude; and their mom is a constant back and forth), determine how they would rather die, and are in a constant trade with things in the universe, the trees, the stars — where the novel gets its name, I'll Give You The Sun. But, this relationship isn't always as clear as it seems at the beginning.

2. It's Two Puzzle Pieces Of The Same Novel Stitched Together

3. The Characters Are Electric

Nelson creates such three-dimensional characters that they catapult off the page.

Noah: Noah in his heart is an artist. He's constantly painting in his mind as he comes across people, in this completely surrealist way. (More on that later.) As it seems to go when you're 13, he's also an outcast. When we meet him, he's being threatened by "surftards," older surfer dudes, who want to throw him off a cliff into the ocean. In his own words, he feels "newly minted as a human," which is just a perfect way to describe it.

Noah is also gay, and closeted. Though he suspects people know anyway.

By the time he's 16, he's done a 180 from the quiet loner he once was. He's on a sports team and is now willingly jumping off the death-defying cliff the surftards once used to threaten him with.

Jude: At 13, Jude is popular with the surftards because she can surf better than all the boys and, as Noah says, her hair.

And because of her hair — I use up all of my yellows drawing it. It's hundreds of miles long and everyone in Northern California has to worry about getting tangled up in it, especially little kids and poodles and now asshat surfers.

But Jude's an artist too. She creates sand women sculptures that she doesn't let anyone see. At 16, Jude follows her Grandmother Sweetwine's "bible," a book of new-agey rules to live by. Always walk right foot first to avert calamity, which comes at you from the left. She's desperately trying to fix something that has broken in her.

Their mom: Noah describes his mother as a "blow-in," someone almost from another world. Everyone wants to be in her own movie with her.

I know the following: Mom has a massive sunflower for a soul so big there's hardly any room in her for organs.

But somehow, Nelson never paints her as cartoonish. Noah and Jude compete for their mom's attention, respect, admiration, and love.

Their dad: In Noah's words, he's an artichoke. He's got a jock physique so big and strong that when Noah draws him, his head can't fit on the page. He bonds more easily with Jude, but when he tries to pull Noah into father-son time, he never quite understands him. But just when you think you have him pegged, Nelson flouts simple stereotypes and injects him with an adrenalin shot of humanity.

Noah's artwork paints through the pages, not through illustrations, but through Nelson's words. The text often takes on a note of surrealism, as things are described not exactly how they happen, but how Noah would draw them after they happened.

(A Series: Boy Inside a Box of Darkness)

(Portrait: Jude Braiding Boy After Boy Into Her Hair)

(Self-Portrait: Throwing Armfuls of Air Into the Air)

It makes the novel completely unique, and through its surrealist undertones, ironically it feels more realistic, more alive, more human. It shows plot based on feelings, not necessarily about real action.

5. You Can Viscerally Feel the Characters' Feelings

I would argue that because of Nelson's approach, readers get closer to the characters than they ever would be able to otherwise. Noah has a crush on a new boy named Brian, but something happens that probably has happened to many young teenagers and yet, when it did, I felt like I was being torn apart just reading the sentences.That's how good Nelson is. The same goes for small details Nelson adds in to talk about their father. As I alluded to, he seems like just this big tough guy, but through minor details, not any major action, his character managed to break my heart.

I sat and thought a lot about the ending when I was done. My immediate reaction was that I didn't think it did the story justice. However, when I thought of it through the lens of the theme of fate, which echoes through the entire novel though not glaringly, I realized what a feat Nelson had accomplished. After a lot of thinking, I know it suits the story just perfectly.

So, in the end, yes, this novel is big. It tackles big themes without bashing you over the head with them. It's ambitious, and it's mesmerizing what Nelson was able to pull off. Because of this, there's far too much to say and talk about to fit on one page. But no matter. When it comes down to it, it's the characters that burn down into you, who you won't soon forget.

I'll Give You the Sun by Jandy Nelson, $10, Amazon

More like this
Jessica Simpson On The Time She Was Pursued By A Backstreet Boy & An *NSYNC Member
By The Editors
10 Equally Romantic & Heartbreaking Books From British & Irish Authors
By Shahed Ezaydi
Netflix Shut Down 'Bridgerton' S3 Rumours About A “Very Dark” Storyline
By Bustle
We’ve Entered The Hot Boy Reader Era
By Samantha Leach
Get Even More From Bustle — Sign Up For The Newsletter
From hair trends to relationship advice, our daily newsletter has everything you need to sound like a person who’s on TikTok, even if you aren’t.