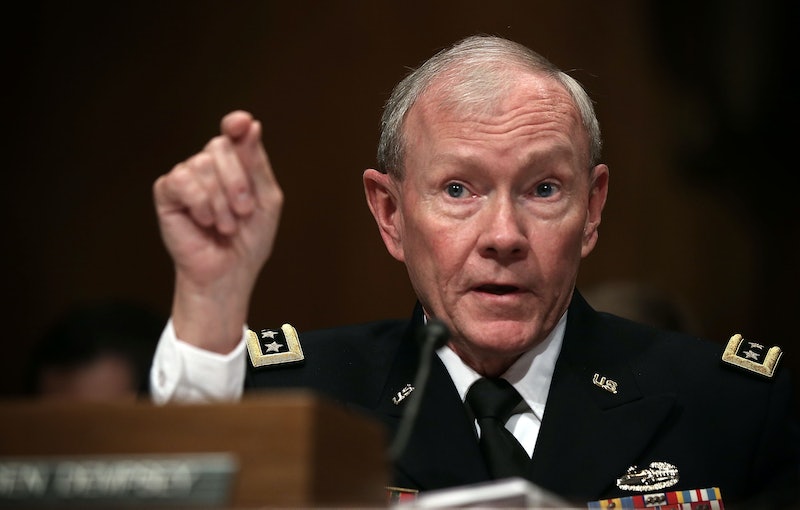 If there's one thing Americans have come to know well over the last decade, it's what it's like to be a nation constantly at war. And wars of all kinds — big, official ones like Iraq and Afghanistan, ones that are on the down-low like Pakistan, and ones that amount to nothing more than U.S. airstrikes. Now, U.S. general Martin Dempsey has testified to Congress that still more could be on the way — he'll advise President Obama to deploy ground troops against ISIS, if the current airstrike-only strategy doesn't seem to be working. In other words, we're already seeing the beginnings of "mission creep."

The U.S. has already seen thousands of American soldiers lose their lives, to say nothing of the staggering number of casualties suffered by civilians within Iraq and Afghanistan, over the last several years. Perhaps sensing the risk of a U.S. populace weary with war, President Obama offered an assurance to the public when discussing his strategy for combating ISIS: no ground troops would be deployed to combat ISIS, with a group of only 475 service members headed to Iraq to help train the Iraqi military, and the Kurdish military, known as the Peshmerga.

But with one of his top generals already admitting he'd push for ground troops if airstrikes weren't successful — and if "success" means outright defeating ISIS, that's a pretty foreseeable scenario — there's a real risk that this engagement, which Obama strove to portray as limited and indirect, could boil over into the kind of long-term engagement anti-war critics fear most. Dempsey laid out his view to Congress pretty plainly Tuesday, according to The New York Times.

My view at this point is that this coalition is the appropriate way forward. I believe that will prove true. But if it fails to be true, and if there are threats to the United States, then I of course would go back to the president and make a recommendation that may include the use of U.S. military ground forces. ... His stated policy is that we will not have U.S. forces in ground combat. He has told me as well to come back to him on a case-by-case basis.

It Wouldn't Be The First Time

In other words, it's quite possible that Obama could face a situation when Dempsey (and any other top military personnel who agree with him) may try to convince the president to go back on his earlier statements and send combat forces into the field in Iraq and Syria. This is a huge deal, both because of how stridently Obama criticized the notion of deploying ground troops into Syria in particular, calling it a "profound mistake," according to NBC News, and because he's changed his mind about backing military escalation before.

As The New York Times detailed back in late 2009, Obama was initially highly skeptical of former General Stanley McChrystal's proposal for a troop surge in Afghanistan, but was eventually convinced to back a slightly-reduced surge of 30,000 troops, rather than the 40,000 McChrystal had initially requested. It didn't go well — overseen by General David Petraeus, the Afghan surge was widely viewed as a massive failure, even by NATO's own reckoning.

It's Not A Far-Off Option

Basically, if the airstrikes aren't successful in achieving Obama's stated goals against ISIS, to "degrade and destroy" the terrorist group, it sounds likely that he's going to have people (Dempsey at the very least) leaning on him for an active ground deployment. Obviously, this doesn't mean anything for certain, as the President is the Commander in Chief, and the shot-calling lies with him.

But after well over a dozen years of constant warfare against terrorists and militants throughout the Middle East, and a lot less to show for it than you'd like — post-war Iraq didn't become a haven of stability, instead giving rise to ISIS along with the Syrian Civil War — there's never a bad time to question whether promises of "limited engagement" and "airstrikes only" are real strategic boundaries, or ones just waiting to be breached.