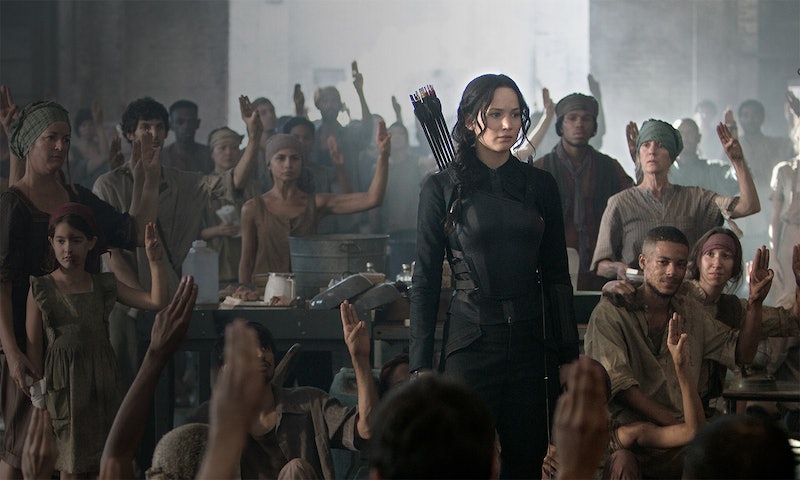 In the new Mockingjay trailer Katniss is incredibly powerful even in her fragile post Peeta-got-captured state. Like she says, "I was their Mockingjay long before I accepted the role." Basically Katniss has been inspiring people since the moment she volunteered for Prim and it all comes to a head in Mockingjay. But that version of Katniss is not just J. Law's take on the character. Katniss was pretty badass in the Mockingjay book to the point where just her presence was a motivator. Take this scene for example:

I hear my name rippling through the hot air, spreading out into the hospital. “Katniss! Katniss Everdeen!” The sounds of pain and grief begin to recede, to be replaced by words of anticipation. From all sides, voices beckon me. I begin to move ... saying hello, how are you, good to meet you. Nothing of importance, no amazing words of inspiration. But it doesn’t matter. Boggs is right. It’s the sight of me, alive, that is the inspiration.

But there are plenty of times when Katniss has paired her presence with unparalleled words of encouragement. These 7 inspirational Mockingjay quotes are proof that Katniss is a born leader, even if she was reticent to take on the role at first.

"FIRE IS CATCHING AND IF WE BURN, YOU BURN WITH US."

This line wasn't written for a campaign, instead it just came out of Katniss in her fury against the Capitol. Who can just think of revolution slogans off the top of her head, like that? Katniss, that's who.

"YOU WILL HOLD YOURSELF AND YOUR GOVERNMENT RESPONSIBLE FOR THEIR SAFETY, OR YOU'LL FIND YOURSELF ANOTHER MOCKINGJAY!"

Katniss is taking zero crap from Coin when it comes to getting the captured tributes back.

"THAT’S WHAT YOU AND I DO, PROTECT EACH OTHER.”

Not only is this a sweet Peeta and Katniss moment, but it's her way of encouraging Peeta that despite all that's happened, she is still there for him. Plus it's her kicking gender norms in the teeth, because women can protect men too.

"IF HE WANTS ME BROKEN, THEN I WILL HAVE TO BE WHOLE."

You go, girl. Stick it to President Snow.

"SOME WALKS YOU HAVE TO TAKE ALONE."

True, and strangely reading that makes me feel less alone knowing someone else feels the same. Even if that someone else is a fictional character.

"I CAN SURVIVE JUST FINE WITHOUT EITHER OF THEM."

Gale and Peeta talk about how Katniss will choose whoever she thinks she needs the most, but an eavesdropping Katniss is having none of that. In perhaps the most feminist moment of the series, Katniss comes to the conclusion that she needs neither of the men in her love triangle. Boom.

"YOU KNOW WHO [THE CAPITOL] IS AND WHAT THEY DO. THIS IS WHAT THEY DO! AND WE MUST FIGHT BACK!"

Seriously there is no better choice to rally the troops than a fed-up Katniss. At just 17 years old, she's a true inspiration.