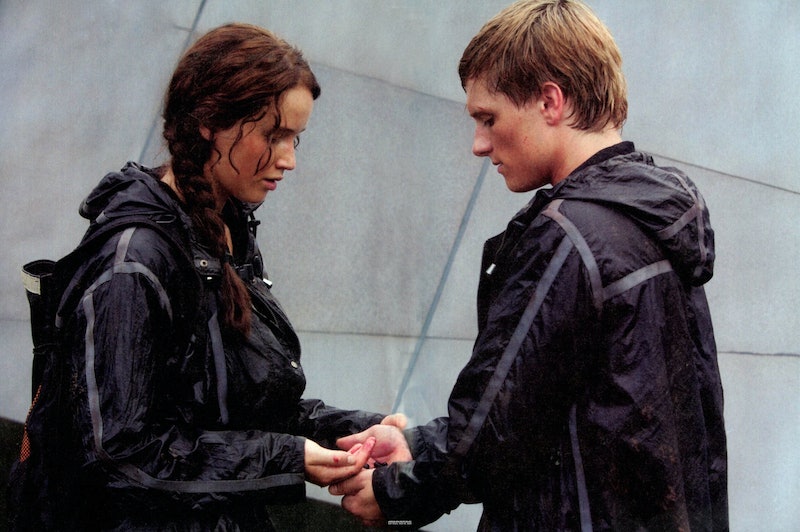 As we get closer to the movie's release, we are now starting to finally get new Mockingjay: Part 1 posters and trailers, and it's so exciting to know that these characters will come to life again on screen in November. (Spoiler alert for this whole article): One of the biggest plot points I'm looking forward to in Mockingjay is Peeta and Katniss' relationship, especially as he struggles to find himself in the wake of his hijacking.

But even when Peeta isn't himself, and even when Katniss is in the throes of battle, it's evident that the pair loves each other. While Katniss and Gale have a bittersweet relationship, fueled by sadness and intensity, Katniss and Peeta's relationship is more pure. Peeta has unconditionally loved the Girl on Fire for years. And even though that love is tested in Mockingjay, it ends up prevailing.

It's not surprising that Katniss picked Peeta in the end. If I found someone who said half the nice things to me that Peeta says to Katniss I'd marry him on the spot. But in Mockingjay, their relationship isn't one sided any longer and Katniss has her vulnerable moments, too. The growth of the love as its put through the wringer is one of the best parts of the book and it's why I know we need these 16 romantic Peeta and Katniss quotes from Mockingjay to be in the movie.

"IF I KNEW FOR SURE THAT [PEETA] WAS DEAD, I COULD JUST DISAPPEAR INTO THE WOODS AND NEVER LOOK BACK. BUT UNTIL I DO, I'M STUCK."

Peeta is all that's keeping Katniss alive at the start of Mockingjay so if that bond isn't forged by not love, I don't know what is.

"YOU'RE ALIVE ... PEETA'S ALIVE. AND A TRAITOR. BUT AT THE MOMENT, I DON'T CARE. NOT WHAT HE SAYS, OR WHO HE SAYS IT FOR, ONLY THAT HE IS STILL CAPABLE OF SPEECH."

The first moment that Katniss sees Peeta after weeks of not knowing his fate is such a powerful part in the book. It's when you can tell the depth of feelings she has for the boy with the bread.

This sweet line is only overshadowed by what Katniss says to it.

For Katniss to admit her love to Peeta is not only monumental, but I admire the way author Suzanne Collins broke from the "I love you" stereotype. Instead she gave a whole knew meaning to the word "real."

“WHAT I NEED TO SURVIVE IS NOT GALE'S FIRE, KINDLED WITH RAGE AND HATRED. I HAVE PLENTY OF FIRE MYSELF. WHAT I NEED IS THE DANDELION IN THE SPRING. THE BRIGHT YELLOW THAT MEANS REBIRTH INSTEAD OF DESTRUCTION. THE PROMISE THAT LIFE CAN GO ON, NO MATTER HOW BAD OUR LOSSES. THAT IT CAN BE GOOD AGAIN.”

Ugh, the moment that Katniss realizes she was always destined for Peeta gives me chills. I know there are a lot of Peeta haters out there, but it's canon that they were meant for each other. #SorryNotSorry.

“YOU'RE A PAINTER. YOU'RE A BAKER. YOU LIKE TO SLEEP WITH THE WINDOWS OPEN. YOU NEVER TAKE SUGAR IN YOUR TEA. AND YOU ALWAYS DOUBLE-KNOT YOUR SHOELACES.”

It's the little things about Peeta that Katniss has taken note of over their years together which shows she has cared for quite awhile, even if she couldn't admit it to herself.

"I MUST HAVE LOVED YOU A LOT."

Peeta's use of the past tense here is heart-breaking because you can tell he understands how his change in emotion is a loss for himself and for Katniss, and at the time he can't see a way out of the hijacked state he's in. (Don't worry Peeta, it all works out in the end.)

"IT’S ONLY NOW THAT HE’S BEEN CORRUPTED THAT I CAN FULLY APPRECIATE THE REAL PEETA. EVEN MORE THAN I WOULD’VE IF HE’D DIED. THE KINDNESS, THE STEADINESS, THE WARMTH THAT HAD AN UNEXPECTED HEAT BEHIND IT."

I'd almost argue that Peeta had to go through what he did for Katniss to appreciate him as more than a giver of unconditional love. In order for their relationship to have equality, she needed to understand what he meant to her, even if that meant almost losing him first.

The scene where Katniss kisses Peeta to snap him out of his mind-controlled state shows the depth of her desire to help Peeta become who he once was.

Peeta's response to Katniss' request to stay with her is reminiscent of Snape saying it in Harry Potter. Except this couple actually made it, so the word is tinged with hope instead of sadness.

“I THINK... YOU STILL HAVE NO IDEA THE EFFECT YOU CAN HAVE."

This is essentially the Mockingjay version of One Direction's "You Don't Know You're Beautiful."

"PEETA HOLDS OUT A CAN TO ME ... I TAKE IT, NOT KNOWING WHAT TO EXPECT. THE LABEL READS LAMB STEW. I PRESS MY LIPS TOGETHER AT THE MEMORIES OF RAIN DRIPPING THROUGH STONES, MY INEPT ATTEMPTS AT FLIRTING, AND THE AROMA OF MY FAVORITE CAPITOL DISH IN THE CHILLY AIR. SO SOME PART OF IT MUST STILL BE IN HIS HEAD, TOO. HOW HAPPY, HOW HUNGRY, HOW CLOSE WE WERE WHEN THAT PICNIC BASKET ARRIVED OUTSIDE OUR CAVE."

Every time Peeta remembers something from his past, it was a chance for the reader and for Katniss to see that Peeta was going to make it through this time, and hadn't lost all of himself to the Capitol torturers.

"KATNISS. I REMEMBER ABOUT THE BREAD."

Peeta tossing Katniss bread when she was starving was a turning point in her survival, so for that to be a memory he recalls even while under the effects of the hijacking must have meant the world to her. As Katniss says, it was their "one moment of real connection before the Hunger Games."

"PEETA AND I GROW BACK TOGETHER ... HIS ARMS ARE THERE TO COMFORT ME. AND EVENTUALLY HIS LIPS."

I think "growing back together" may be the perfect way to phrase their relationship.

"THAT'S WHAT YOU AND I DO. PROTECT EACH OTHER."

Near the end of the book, Katniss tries to take what is essentially a cyanide pill to kill herself and Peeta puts his hand over the pill just in time. Katniss begs him to let her go, but he refuses. It's such a triumphant moment to watch Peeta once again protect Katniss instead of harming her like the Capitol hijackers intended him to do.

In the end love really does prevail.