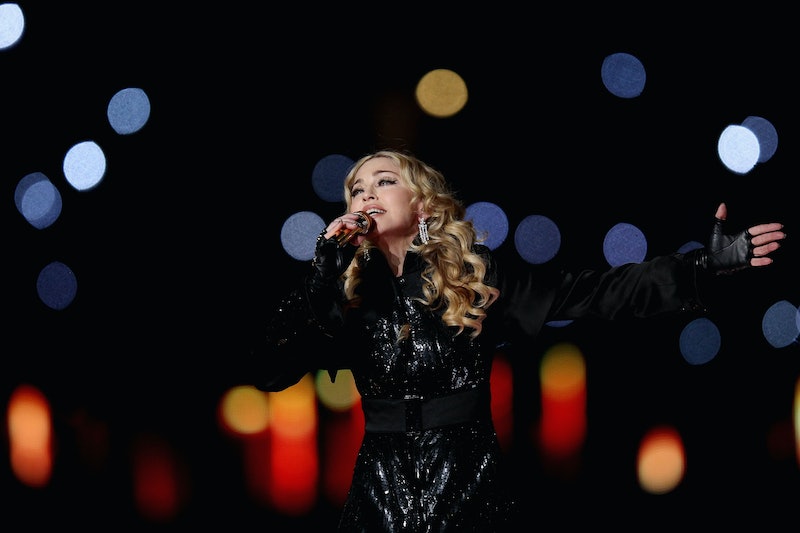 Brace yourselves, Madonna fans! The Queen of Pop's new single could be just around the corner. In an interview with BBC Radio 1 on Monday, DJ and producer Diplo revealed that Madonna's new single was more or less finished in New York last week — and all that's left to do is the "fine tuning." Diplo also shared some interesting details about his experience working with Madonna in the studio. For example, when it's all said and done, Diplo explained that he could end up with "five or six" songs on Madge's upcoming 13th studio album — and that's something that he definitely didn't see coming when the two first got together:

I never expected to accomplish a lot with her. I just thought we were going to meet up, maybe try some things out, because I’ve always heard that she was very difficult to work with from a lot of different producers. But we had a really good chemistry in the studio...

Diplo went on to say that Madonna is "a legend, 1,000 percent." In fact, at one point during the recording process, he simply became overwhelmed by the sheer magnitude of her career:

We have one song — it’s kind of a retrospective record, the lyrics are about her career. I was trying to sample some vocals from news reports from her, and to have her in the room while we were digging up old YouTubes about the last 30 years of what she was doing…it was just crazy.

But Madonna's more than a legend — according to Diplo, she's also a great collaborative partner:

It’s cool to have someone like her have some faith in us. As a producer, all we really want from an artist is someone to really trust us. We’re good at what we do, and I love that she was into that. But of course, she’s very opinionated, so it’s good to have someone who puts her two cents in and makes it sound the way she wants. That’s what a real star does.

Wow. It's really awesome to hear that Madonna, an artist who, as Diplo said, has a reputation for being hard to work with, was actually willing to collaborate in the studio. Whether she's turned over a new leaf or just really liked Diplo, I can't say. Either way, good vibes continue to surround this project.

Check out Diplo's interview with BBC Radio 1 below.