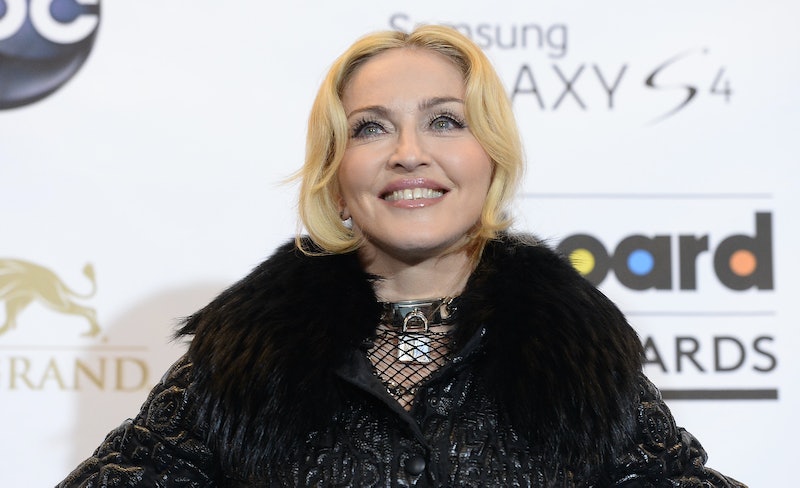 On Tuesday, Madonna revealed on Instagram that she's working with singer-songwriter Alicia Keys on her new album. Now that's a collaboration I definitely didn't see coming! DJ and producer Diplo, who has been working closely with Madonna on her upcoming 13th studio album, also teased the surprising collaboration on Instagram, posting a picture of himself tickling the ivories alongside Keys in the studio. It's currently unknown whether the three musicians were working on Madonna's new single or just an album track.

On Monday, Madonna suggested on Instagram that her new album was finally almost complete, and now, she's added another collaborator to the mix! I don't know what to think or how to feel. It certainly seems as though the legendary 56-year-old pop star is playing with our emotions, but perhaps Keys was just on-hand to provide some last-minute finishing touches. Let's hope.

I must admit, I'm just not sure how well Keys' voice would blend with Madonna's on a duet — vocally, the two women couldn't be more different. However, I'd love for Keys to do some songwriting for Madge. Keys has definitely proven over the course of five studio albums that she's a skilled writer with an ear for memorable melodies. Check out both Madonna and Diplo's Instagram posts below.

On her new single "We Are Here" Keys sings about wanting to make the world a better, more peaceful place. She's asking fans to use the "#wearehere" hashtag and "I am here for..." signs on social media in order to start conversations about important issues like gun violence in cities like Chicago. Knowing Keys' mission, Madonna's statement that she's here to "fuck shit up" is probably more than a little misguided, but in a different context, I'd probably really appreciate Madge's moxie! I must say, I have a good feeling about this new album overall.

Madonna's last studio album, 2012's MDNA, is an unremarkable, trend-chasing, largely joyless affair. Since MDNA's release, I've said time and time again that all I want is for Madonna to sound like she's having fun again — and if her Instagram photos over the past six months are to be believed, she's definitely having a good time! Why else would she be so eager to share album details with her fans and let us in on her recording process?

Admittedly, I'm not happy about everything we've learned about Madonna's new album. For example, rumored song title "Bitch, I'm Madonna" is the exact kind of pompous ego stroking that absolutely repelled me on MDNA. Still, the good vibes I'm getting from Madge's social media presence lately are strong. If she's having fun making the music, we're going to have fun listening to it. It's really as simple as that.

With an impressive group of talented and diverse contributors behind her, could Madonna be gearing up to reinvent herself once again with her new album? She may have stumbled with MDNA, but she certainly seems to be back on track. I can't wait to hear what she has to offer.