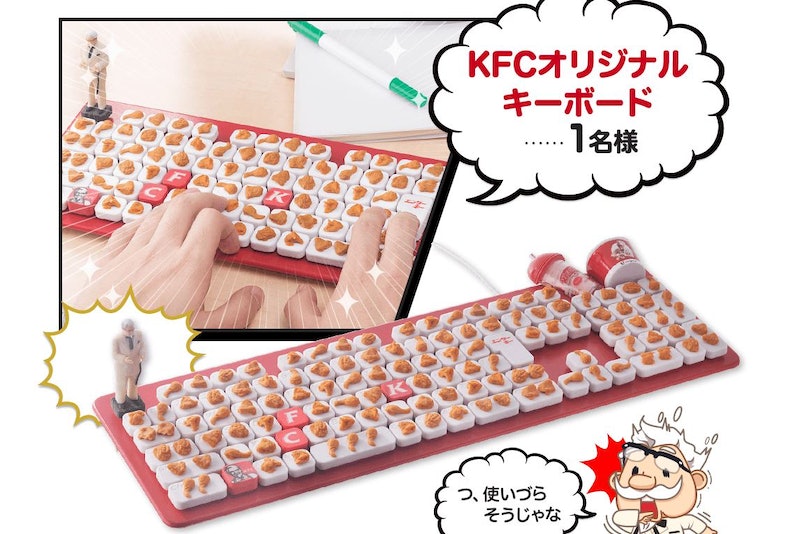 OK, so by now, you’ve probably seen the KFC fried chicken keyboard that’s making the rounds. In case you’ve been asking yourself whether it’s a real thing or just a clever Photoshop job, though, guess what? We’ve got some answers. The short version: It’s real. It’s from Japan. And it’s very, very strange.

TIME described it today as “the perfect thing to write your resignation letter on as you pack your bags and head east” — but this isn’t actually the first I’ve heard of it. I spotted it on Design Taxi back at the very beginning of September; at the time, though, I couldn’t exactly tell what it was for, or even whether it actually existed. Accordingly, I had a brief laugh about it before moving on to more important things (like Biscuit Tacos).

Since then, though, it’s become apparent that the fried chicken keyboard not only exists, but moreover, that it’s not going away. According to Rocket News, it’s one of the prizes up for grabs as part of a promotion KFC Japan is currently running in honor of Colonel Sanders’ birthday. All you have to do for the chance to win one of these bad boys is: A) be a resident of Japan; C) follow KFC Japan on Twitter; and D) tweet a link to the contest’s promo page along with a hashtag that translates to “KFC Colonel’s Day.” And the fried chicken keyboard isn’t the only prize, either — there’s also a fried chicken mouse, a fried chicken USB drive, and a pair of dainty little fried chicken earrings. I’m not sure what the most surprising part of that last phrase is: The “fried chicken” part, the “earrings” part, or the fact that they’re actually “dainty.” For reals. Take a look:

For the curious, Colonel Harland David Sanders was born on September 9, 1890. He held a huge array of jobs during his lifetime, many of which he lost due to his proclivity towards brawling with coworkers; that’s how he got fired from his job as a fireman, as well as how he ended his career as a lawyer. It was when he started serving fried chicken from his roadside restaurant in Corbin, KY that he hit the big time. He was, in fact, an actual colonel, although he didn’t achieve the rank during his brief period in the army when he was 16; instead, he was commissioned as a Kentucky Colonel in 1935 by governor Ruby Laffoon as his popularity as of his roadside fare grew. He started franchising what would become KFC in the ‘50s, and the rest, as they say, is… well, you know how it goes. He would have been a whopping 126 years old this year if he was still alive.

Now that’s what I call a legacy!

More like this
8 TikTok Pasta Recipes To Try Out At Home
By Emma Garza
How To Make The Grinder Sandwich TikTok Is Obsessed With
By Emma Garza
How To See The Lunar Eclipse On May 15-16, 2022
By Kaitlyn Wylde
How To Fight For Reproductive Rights, Based On How Much Time You Have
By Courtney Young
Get Even More From Bustle — Sign Up For The Newsletter