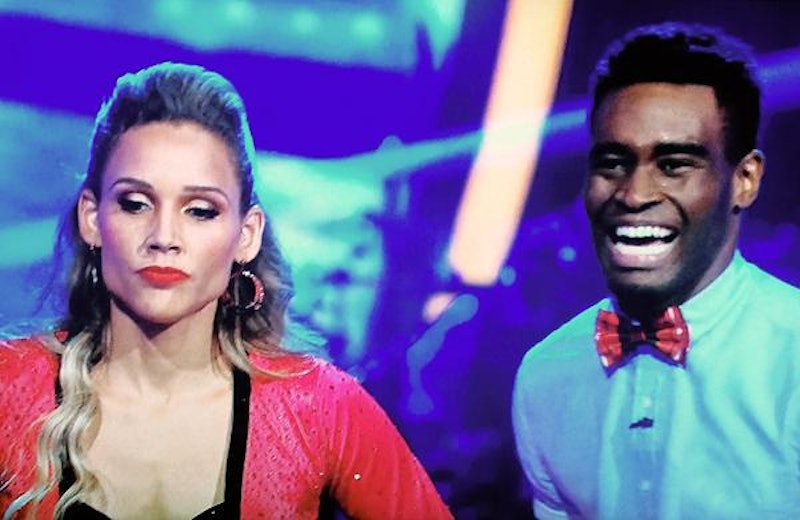 In the first Dancing With the Stars elimination of the season, Lolo Jones and Keo Motsepe were sent home and it's probably for the best because Jones was really out of place on the stage. Unlike last season's Olympian (and winner) Meryl Davis, Lolo Jones is not an ice dancer and it turns out that jumping hurdles racing bobsleds doesn't prepare you quite as well for doing a foxtrot.

It's not surprising that Jones went home, though, because her biggest critic was herself. It's understandable to be upset when you don't quite perform the way you'd practiced, but Jones' attitude was exhausting. She wouldn't stop making excuses for her off-tempo dancing and she remained angry about it throughout the night. When her partner tried to cheer her up by offering a high five, she turned away.

I'm sure it's hard for someone who is used to excelling to do poorly at something like this, but her behavior really brought down the mood of the fun premiere. It's probably for the best that she got booted early because honestly she just didn't seem all that up for it. She even gave up towards the end of her dance and walked the last few steps instead of dancing them. Then after receiving a pretty decent score considering, she still made this face for the rest of the show:

A good portion of dance is showmanship, so this face probably hurt her big time when it came time to vote.

I can appreciate that not everyone on this show is a professional dancer, but it's more fun for everyone (viewers and dancers included) when you try hard and enjoy yourself. I love you Lolo, but I don't think dancing is your thing. But that's okay because as she's said before, she has her eyes on the 2016 Olympics, and that should probably be her focus right now, anyway.

More like this
Hannah Brown Got Candid About How ‘Bachelorette’ Fame Led To Drinking Issues
By Brad Witter
Scott Disick’s First Time Around Kravis Was “Awkward,” To Say The Least
By Jake Viswanath
Kevin Kreider Finally Asked Out Kim Lee On 'Bling Empire'
By Brad Witter
G Flip Shared How They Got Romantic With Chrishell Stause & Discussed Babies
By Brad Witter
Get Even More From Bustle — Sign Up For The Newsletter