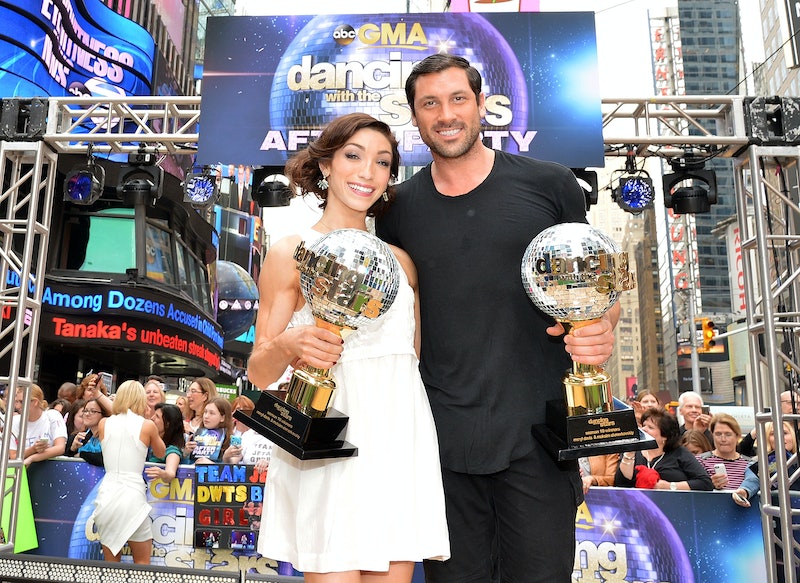 When I was a ten-year-old, I was absolutely positive I wanted to become an Olympic figure skater and triple salchow my way to fame and fortune (and some killer leotards). That dream died when I realized that falling on ice hurts a lot, but I still spent my adolescence idolizing Olympic figure skaters — which was part of the reason I was so pumped when Meryl Davis & Maksim Chmerkovskiy won Dancing with the Stars last season. In case you hate America and didn't watch the Olympics this past winter, Davis won a gold medal for ice dancing — she and her partner Charlie White were the first Americans to ever win gold in that event. (OK, so Davis is technically an ice dancer, not a figure skater, but she still performs choreography while wearing ice skates, and that's close enough for me.)

But David can only take half the credit for her Season 18 DWTS victory. The other half belongs to her professional dance partner, Chmerkovskiy. Maks has competed on DWTS 14 times (!), but he's only won with Meryl. Granted, being a professional ice dancer is like being a professional regular dancer except even harder, so Meryl and Maks had a leg up on the competition from the get-go. Their obvious sexual chemistry didn't exactly hurt their popularity with fans, either.

According to their Instagram accounts, Meryl and Maks still hang out, which is only helping to fuel rumors that they've become an official item, though nothing is confirmed. Well, I guess maybe all my DWTS dreams can't come true. Maks is not returning for Season 19 (which begins Monday), so fans' memories of his perfect ballroom technique with Davis won't be clouded by whoever Maks works with next.

Davis is also moving on to bigger and better things. She and Charlie White spent part of the summer ice dancing in Japan at The Ice 2014, a skating show. Then Davis came back to the states in time for the Mirror Ball Tour, during which the most recent DWTS winner brings her trophy to various cities to promote the new season.

Funnily enough, Season 19 features another Sochi Olympian: Lolo Jones, who was on the American bobsled team (she also competed in the 2008 and 2012 summer Olympics as a hurdler). Jones didn't perform nearly as well as Davis did at the Olympics, but maybe she'll follow in her footsteps on Dancing with the Stars. Without Maks as a partner, though, it'll be difficult for Jones to get a fan reaction anywhere close to Davis'. We'll have to wait until the new season gets underway to see who our new favorites will be.

But it will have to be someone really special to take over Meryl's reign.

More like this
Everything We Know About Chèrie & Jessey’s Abrupt Exit From Bling Empire
By Alyssa Lapid
G Flip Shared How They Got Romantic With Chrishell Stause & Discussed Babies
By Brad Witter
Jake Daniels Just Became The UK’s First Active Football Player To Come Out As Gay Since 1990
By Sam Ramsden
What Is Jeanie Buss' Net Worth? The Lakers President Is Uber Rich
By Hugh McIntyre
Get Even More From Bustle — Sign Up For The Newsletter