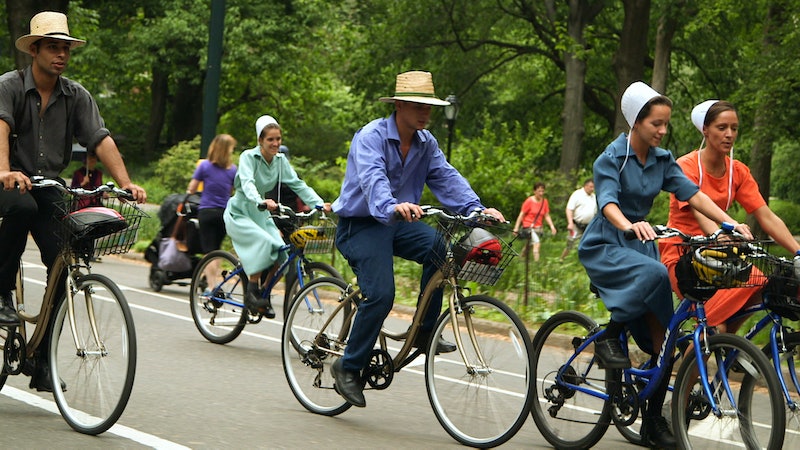 The Amish are a tightknit and secluded group in American society. It comes as no surprise then that some of the cast members from the first two seasons of Breaking Amish hailed from the same communities. Like remember when Jeremiah had a girlfriend named Iva, who he left to go hang out in New York City for Season 1 of the show, and then she popped up on Season 2? Bananas.

With all of these cast members not only getting to know each other through their communities, but now also bonded together forever by these TLC shows, it would be almost kind of weird for a familiar face not to show up in Season 3 of Breaking Amish, which premieres Thursday, Sept. 18. So with this new cast of Amish men and women, can we count on seeing an old friend among this group of strangers?

Unfortunately, it doesn't seem likely. There hasn't been any news about anyone from previous Breaking Amish casts going back for a second or third helping during the new season this fall. The preview for this season just shows the five wide-eyed and bewildered Amish adults as they leave their old lives behind to explore the crazy world of Brooklyn. You know if there was an old cast member crashing this Breaking Amish party, that is all TLC would be publicizing.

But in case the network has managed to really keep this season under wraps, the two former Breaking Amish cast members most likely to return this season would probably be Kate and Jeremiah from Season 1. Kate is living in New York right now to pursue her modeling career, so it would just be a quick subway ride for her to hang out with the new Breaking Amish kids. Since she's been through this whole thing before, she could impart her wisdom on the new cast, which would include how to successfully transition into the English world, how to tell if your roommate is practicing witchcraft, and how to make sure your Amish friend's mom doesn't drink too much at a swanky New York party.

Jeremiah returned to his Amish lifestyle at the conclusion of the aptly titled Return to Amish last summer. But judging from Jeremiah's social media accounts, it looks like the Amish thing hasn't worked out for him yet again. Maybe he wants to leave the Amish for good — or for now — again, and joining the new Breaking Amish cast as they leave their familiar lives behind could help him get through it. If not, we can always hold out hope that Jeremiah will be on Breaking Amish Season 4. It's just a matter of time.