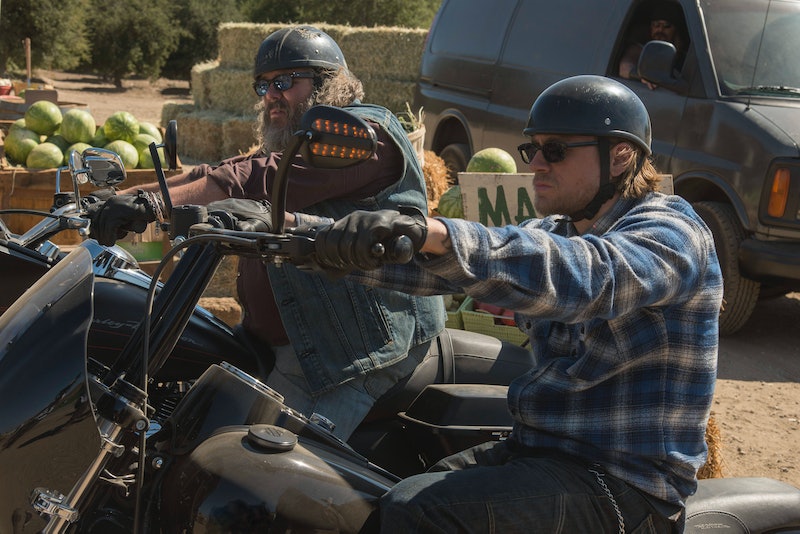 It's been a question simmering on the back burner since Sons of Anarchy first began: Will Jax live or die when SOA ends? Thanks to the events of Tuesday's Sons of Anarchy episode "Toil and Till," it's almost all but certain now. Granted, this theory shouldn't be all that surprising. Charming has been a death trap since day one and we all know that. Jax has been consulting his dead father's journals and his memory. Countless characters have fallen over six seasons. This place is not safe, even for the man leading the ride.

After intercepting Lin's delivery — and leaving a ridiculously bloody trail and a few demolished trucks in their tracks — Lin confronts Jax, who swears that the club had nothing to do with the interception. He instead turns their anger towards the Irish, the only other people who were supposed to know about the drop. It seems to work for the moment, but Jax decides to confirm the story by framing two members of another club. The problem is that they left behind a sawed-off shotgun that can lead straight to Jax and SAMCRO.

Jax returns home to the mother who killed his wife and framed the Chinese for her murder. They share a cozy mother-son moment as we look on, knowing that with all the havoc Jax is about to face stems from Gemma's rash decision to kill Tara and the less rash decision to lie about it. As Jax lays with his son Abel, his face practically bursting with pain over what he's done to avenge the love of his life, we can see it all over his face: This might be the last time he holds his darling son Abel.

But this is a possibility that's been brewing for years. Here's why Jax is heading towards a tragic end:

It's no secret that Sons of Anarchy plays elements of the Shakespearean classic Hamlet. Jax is a stand-in for the Prince of Denmark, his overly affectionate and possessive mother Gemma works as Queen Gertrude, Clay certainly reeks of King Claudius. Though Tara didn't die by her own hand, she's felt like a version of Ophelia (instead of being driven mad by her Hamlet, she's driven into a death trap of a relationship by her love for him). Now, let's take a moment to remember 8th Grade English. How did Hamlet end? With everyone, including the fair prince, dead on the floor of the castle. If SOA is an homage, and Gemma-Gertrude, Clay-Claudius, and Tara-Ophelia are all dead, Jax is next.

The logo for Sons of Anarchy Season 7 is ominous, to say the least. Everywhere, a skull replaces the "O" in the SOA logo. What's more, is that Jax is also shown either with a skull peeking through his wan face or an actual skull replacing the Sons tattoo on his back. Of course, the reverse possibility is that Jax is becoming the living embodiment of the Grim Reaper this season — and if that's the case, he's already well on his way after only two episodes.

There's No Way Out

Since the show began, Jax has been reaching for the impossible: He wants to live a life dedicated to SAMCRO without the consequences. He thought he could have a happy wife and children, be a good man, and still run the club. That's never been possible. It wasn't possible for Jax's father, and yet Jax thought it could somehow be possible for him. Hell, even if he'd gone the route Clay went, things wouldn't end well for Jax teller. Sitting at the head of the SAMCRO table is a death sentence, pure and simple.

And if that wasn't enough, with the events of "Toil and Till" and the Season 7 premiere, Jax has set himself up for failure. He's managed to survive more than his fair share of troubles. And now that the immense grief and rage over Tara's death are clouding his vision, Jax is swinging a bat with a blindfold on. Everything is going to come crashing down on him. After all, Kurt Sutter is nothing if not dedicated to delivering the realest consequences for his characters, no matter how uncomfortable it makes us. (Just look back at what happened to Opie.) Jax is walking straight to the grave. No turning back.