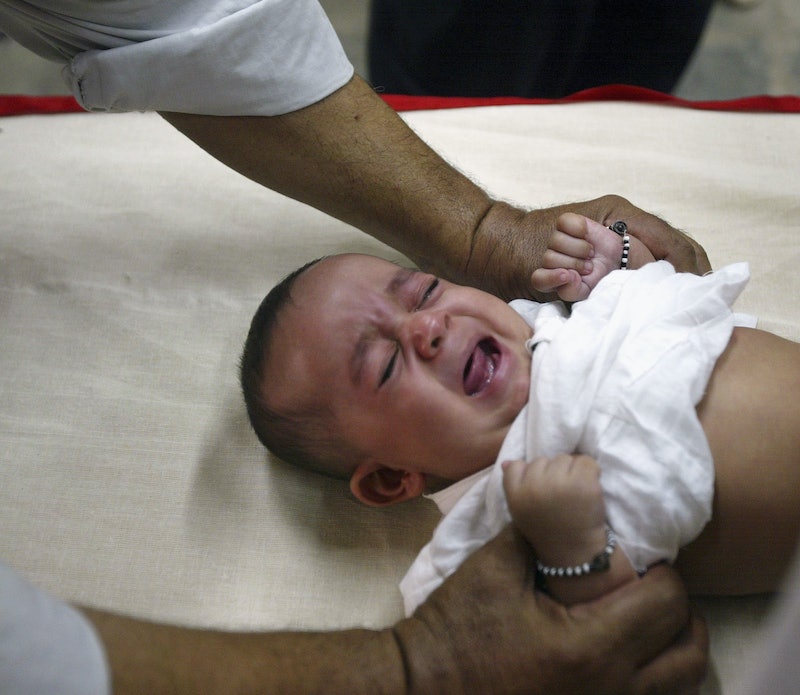 As we know all too well, people with penises tend to direct most of the world's conversation.

Thus, it comes as no surprise: When those penises make the news, they will cause discussion. Today's case in point: The National Center for Health Statistics (part of the Centers for Disease Control and Prevention) says the popularity of male circumcision has fallen dramatically over the past 32 years, especially in West Coast states such as Nevada and California.

What, exactly, causes circumcision's popularity to rise and fall? Is it a question of medical science? Or more of a social question, in line with historic practices of foot-binding, neck-lengthening, and teeth-straightening? The CDC won't say for sure, but plenty of others have thoughts on the matter.

So, in the name of clarity, we too launched a non-scientific investigation into the wider cultural landscape of male genitalia... landscaping. Turns out everyone has an opinion:

More doctors: Uncircumcised men are at much greater risk for STIs.

Even more doctors: Uncircumcised men aren't at much greater risk for STIs.

Royal Family: It is tradition, Kevin.

Europeans In General: Heavens no.

Most Jewish Israelis: Covenant with God!

Some Orthodox Jews: Ritual circumcision is not safest.

Most Muslims: Circumcision is not compulsory in Islam.

Most Muslims: "We'll circumcise our boys."

This Atlantic author's 'golden rule of penises': "Do unto your son what was done unto you."

This same Atlantic author's friends: "It’s hard enough for a guy to get blow jobs as it is.”

This other Esquire author: "Circumcision is just like a crew cut for the penis."

Most private insurers: Circumcision is covered under your plan.

Most public insurers: Circumcision is not covered under your plan.

The American Academy of Pediatrics: "Cut it out." (OK, rough quote).

Penn and Teller: "Circumcision's for dicks."

More like this
Here’s Where The NHS Nurses’ Strike Currently Stands
By Sophie McEvoy
6 Organizations Fighting Police Brutality That You Can Support Right Now
By Syeda Khaula Saad and JR Thorpe
10 Primal Movement Exercises That'll Improve Your Mobility
By Carolyn Steber
Here’s What Health Means To People In 2023
By Isabella Biedenharn
Get Even More From Bustle — Sign Up For The Newsletter
From hair trends to relationship advice, our daily newsletter has everything you need to sound like a person who’s on TikTok, even if you aren’t.