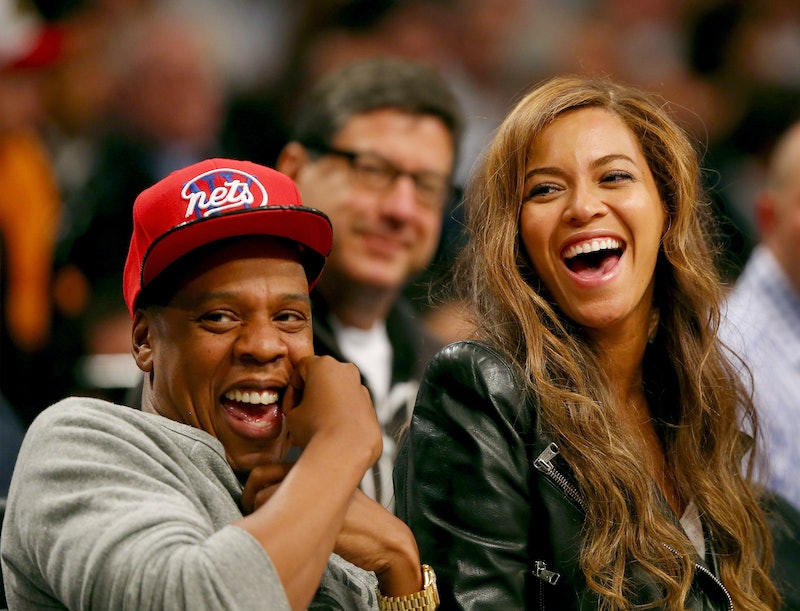 If you, like me, spend more time thinking about Beyoncé and her life than you do about your own, then you might have also been wondering what her next move was going to be. After all, in 2013, Beyoncé released a surprise album that broke iTunes from the sheer amount of people who tried to download it all at once, despite there having been no warning or promotion beforehand. Beyoncé then went on to have an amazing year, from being named TIME magazine's Most Influential Person to performing a showstopping medley of her Beyoncé album at the 2014 MTV Video Music Awards. Now that her first co-tour with husband Jay Z, On the Run, has come to a close, the real question is, what's next? I assumed that Beyoncé might try her hand at acting again, but she reportedly came up with something better: Rumor has it Beyoncé and Jay Z are collaborating on an album together.

My first thought was, well, so much for that whole divorce thing. Beyoncé and Jay Z have been combating stories about how they're five seconds away from calling it quits for pretty much the entire time they've been together, but never have the rumors been flying faster than in the months following the Jay Z and Solange elevator incident that was said to be about Jay Z's infidelity. Now people have swung to the other side of the rumor mill, discussing the possibility that Beyoncé and Jay Z might be having a second baby, and it looks like they're about ready to ride this wave into more billions.

The story was broken by DJ Skee at Dash Radio, who, according to E! Online, "[got] word on the collaboration from sources close to Bey and Jay's camp." The album will allegedly be released late 2014 or early 2015, so soon. Are you screaming? Because I'm screaming.

The thing is, Beyoncé and Jay Z are both insanely talented on their own, but when they're together absolute magic happens. They've collaborated on many songs together before, from "Crazy in Love" to "'03 Bonnie & Clyde" to "Drunk in Love," but they haven't put out a whole album together before. Since we don't have much other details about the album, I'm already worried that it will just be a collection of songs that we've already heard — it's coming out so soon after all — but hopefully even something like that will be padded with some bonus songs that never quite fit on either of their albums before.

Then again, it really doesn't matter if it's a full album or just a collection of songs. We all know we're buying it. As soon as you saw that headline, you were setting money aside for the purpose of buying this album. Jay Z and Beyoncé have never been more popular, their relationship has never gotten so much focus, and we as fans have never benefitted from it more. Yes, there's a slight, possible chance that we might be too obsessed with Beyoncé at this point, but it's kind of hard not to be. And if Beyoncé and Jay Z are taking requests on how to make this album an absolute killer, there's really only one thing they need to do.

Blue Ivy has had a guest appearance on a Jay Z and a Beyoncé song in the past already. It's about time she gets a whole song all to herself. After all, we know that, with her genes, she's going to be the most insanely talented diva the world has ever had the pleasure of knowing in the future. There's no time like the present to get started.

Listen to the announcement below.