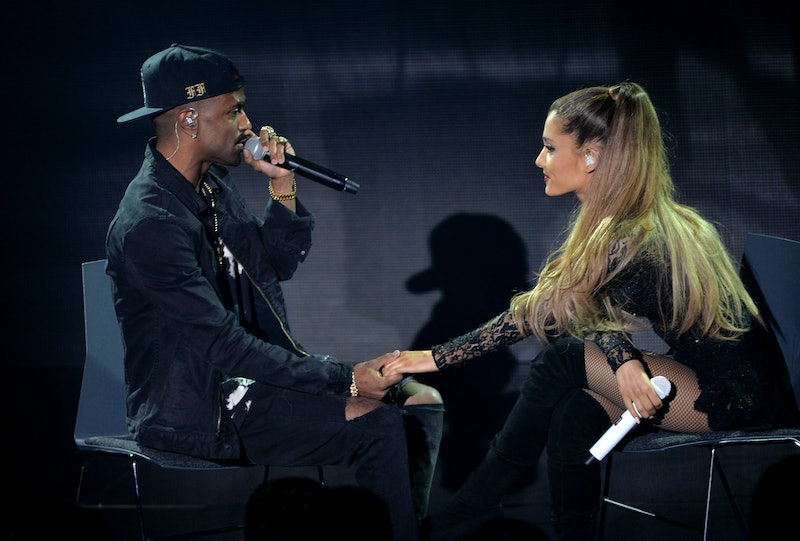 It's been over a month since Ariana Grande and Jai Brooks broke up for the second time and we still don't know much more about her love life than some very educated guesses. Yes, the current rumor on the street is that Grande and Big Sean are dating, but neither one of them have confirmed the story for sure. When asked, Grande plays coy and embarrassed, despite the fact that Grande and Big Sean were caught holding hands backstage at the 2014 MTV Video Music Awards. At the very least, the buzz surrounding Grande and Big Sean has gotten people talking, which means that we're hearing the two of them talk about each other a lot. Recently, Big Sean said he and Grande have great chemistry, something I'm pretty sure all of us knew already but which only serves to highlight how good he and Grande would be for each other if they ever did decide to take their friendship there.

The thing is, there are actually a lot of good reasons for why Grande and Big Sean would make a great couple. The two of them have been friends for years and they clearly care about one another a lot already. The timing is right — i.e. they're both single — and the attraction could definitely be there. The more I hear about the two of them as a couple, the more I've warmed to the idea. It's not just because I think they could achieve power couple status, but it's also about the pure and simple ability to make each other happy. Here are all the reasons I think they've got that in spades.

1. They're very supportive of each other.

When Grande released her second album, Yours Truly, Big Sean made an Instagram post congratulating Grande on hitting number one on the charts. When Big Sean released a new song, Grande Instagramed her own messaged, saying, "You are so deserving of all the good things happening for you and this new music is everything." The two of them are very supportive of one another, which is really sweet.

2. They really do have great chemistry.

Grande and Big Sean have collaborated on two songs to this point — "Right There" and "Best Mistake" — and whether it's on the track or performing live on stage, they just compliment each other. Their musical styles, their talent, and even the way they look at each other just sizzles with chemistry. This really was a match made in (musical) heaven.

Are Big Sean and Grande dating? We don't know, and that's kind of a big deal. Big Sean and Grande have discussed each other at length since the rumors of their romantic relationship first began and neither of them have commented on the rumors one way or another. For whatever reason they're keeping quiet, they're both respecting that this is just between the two of them and that bodes well for their future.

4. They've both been burned by love before.

Both Grande and Big Sean are coming from relationships that ended poorly. Big Sean was engaged to be married to Glee star Naya Rivera and Grande had gotten back together with ex-boyfriend Jai Brooks. Both of them are still healing from the break ups and can relate to one another better than anyone else right now. If they're dating, we can't blame them for taking it slow.

5. Their relationship is already solid.

Big Sean and Grande have been friends for a long time. In fact, according to Big Sean, they've "been friends for years before anything else". If they're dating, the fact that they still consider themselves friends first says a lot about the kind of stable relationship that they're trying to build. If they're not dating, there's no more perfect basis for romance than a really strong friendship. Just watch any movie.

Admittedly, Grande always seems like a very happy person, but the fact that she's been able to smile so much and work so hard after all of the tragedies that have happened to her this summer — chief among them being the loss of her grandfather — is a testament to how happy a relationship with Big Sean is capable of making her. The smiles on their faces when they talk about each other is just heartwarming.

Okay, so this is less about the two of them and more about me. But, come on. Look what great music Beyoncé and Jay Z produced after they started dating (and even beforehand). If Grande and Big Sean end up together, we might one day be hearing rumors of their joint album, too.

More like this
Selena Gomez Joked About Her Relationship Status In Her ‘SNL’ Monologue
By Grace Wehniainen
Is Megan Fox Pregnant? MGK Gave A Shout-Out To Their “Unborn Child” Onstage
By Hugh McIntyre
Britney Spears Set A Wedding Date With Fiancé Sam Asghari & Previewed Her Dress
By Bustle Editors
The 1st Photo Of Priyanka & Nick's' Baby Comes After 100 Days In The Hospital
By Jake Viswanath and Hugh McIntyre
Get Even More From Bustle — Sign Up For The Newsletter