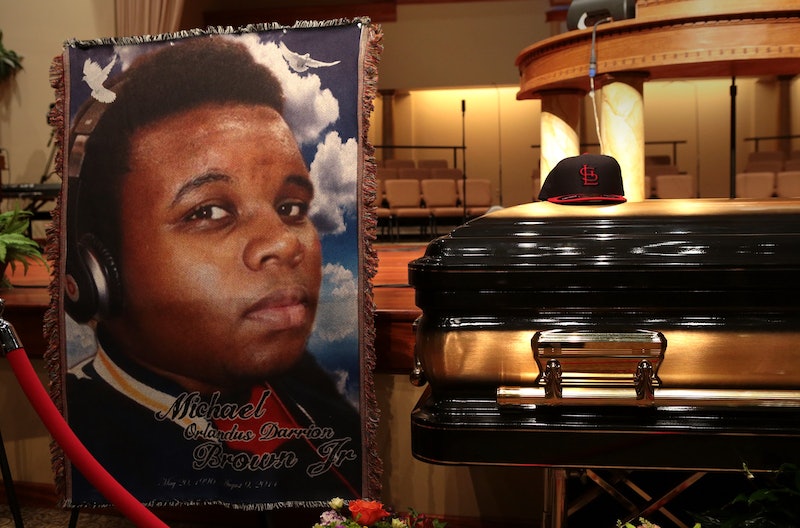 Don't forget about Michael Brown and the people of Ferguson. We've largely moved on from reading about the daily and nightly protests, civil unrest, and the toxic relationship between the St. Louis County suburb's police force and its citizens, but this story is far from over — Michael Brown's killer, after all, is still on paid leave. It all raises an obvious question: When will Officer Darren Wilson be charged for shooting Brown, if at all?

The simplest answer is that it could be a long time, if it even happens at all. That's because the decision whether or not to charge him criminally for the death of the unarmed Ferguson teen is squarely in the hands of a St. Louis grand jury, and they've been given an extension on their timeframe to make the call. According to the St. Louis Post-Dispatch, the grand jury will now have until Jan. 7, 2015 to decide. That doesn't mean they definitely will — they could come out next week with their decision, theoretically — but it could be that "justice for Michael Brown" is still a long ways off.

Wilson's current status has been one of many instigating factors in the fervent protests throughout Ferguson — since the shooting, the people of Ferguson have weathered a militarized police force and the use of tear gas on otherwise peaceful protesters and journalists, while Wilson is effectively in hiding, collecting paychecks all the while. And that's not the only cash he's got coming in — a GoFundMe page supporting Wilson's cause raised a staggering $235,125.

With tensions already as high as they are, it seems like a lot to ask the people of Ferguson to possibly wait over three months more just to find out if Wilson will face charges, but there you have it. It'll be essential to follow how the community responds for that stretch of time.

Obviously, there's no surefire guarantee that the 12-member grand jury will actually decide to indict Wilson (nine of the 12 need to agree to bring charges). There have been concerns by some advocates for Wilson's arrest that Ferguson police may have tainted the jury pool with the release of a videotape of Brown committing an apparent petty robbery before his death, a wholly unrelated incident. The Blot's Matthew Keys revealed Sept. 5 that Ferguson Police Chief Tom Jackson apparently lied about why the tape was released, claiming that media inquiries forced him to do so.

In any event, it's looking like a long-haul kind of situation, with a community's collective angst and humanity hanging in the balance. And no matter what the grand jury decides, the story isn't going anywhere — a criminal trial for Wilson will be every bit the high-profile media event you'd expect, and if he's not indicted, that'll spark a severe amount of scrutiny too.