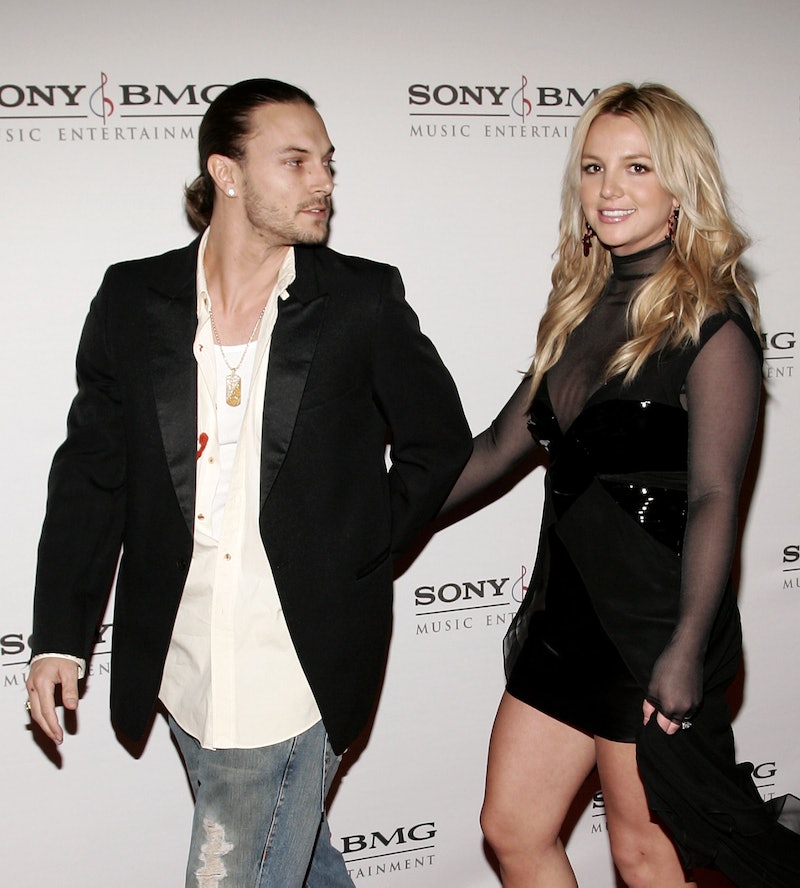 In the first episode of 2005’s Britney and Kevin: Chaotic, pop icon Britney Spears explains that boredom and loneliness inspired her to break out a camcorder during the European leg of her tour. With the camcorder in hand, she spends her downtime grilling the backup dancers, the makeup team, the hair stylists, the bodyguards, and BFF/assistant Felicia Culotta about sex, marriage, sex, love, and sex. When she isn't peppering the tour crew with personal questions, she's having heart-to-hearts with the camera. She and the camcorder are inseparable. BRITNEY + CAMCORDER 4EVAAAAA!

That is until he shows up. He changes everything.

Near the end of the first ep, Kevin Federline joins Britney on tour. The camcorder can't stop Britney’s loneliness from killing her, so she decides to invite the dancer she’d met in Los Angeles just two weeks ago to galavant around Europe with her. This directly impacts the the relationship that’d been blossoming between Britney and the camcorder. What was once a duo is now a trio. It’s Britney and Kevin: Camerotic.

The Britney/Kevin/camcorder story, aka Britney and Kevin and Camcorder: Chaotic

And then, Kevin shows up. Britney points the camera at Kevin and hits him with questions about—you guessed it—sex, marriage, sex, love, and sex.

“That’s why we like him,” Britney responds. We. Britney and the camcorder are a “we.” The camcorder does not object to this.

Before long, Kevin warms up to the camcorder and Britney. He answers Britney’s questions. The camcorder records his answers. They are a happy trio.

In the back of a cab, Britney and Kevin make out. They hold the camcorder up to their faces while they get their mack on. TRIPLE KISS!

As Britney applies an entire bottle of mascara, Kevin points the camcorder at her and asks about their relationship. Just as she begins to open up emotionally, Britney brings the conversation back to sex.

Later, Britney confronts Kevin and the camcorder about leaving her hanging when she said she said “I love you."

“You’re making me look stupid,” she says.“No I’m not,” Kevin says into the camcorder. “No I’m not. I was scared. What would you all do?”

The camcorder does not tell Kevin what it would do.

“If I had the camera in my hands, I’d be having some serious footage on my hands right now," Kevin says to Britney as they hang out in the tour bus. "See you layin’ there like ass naked behind the lens. It’s kinda hot. It’s kinda sexy.”“You’re cute,” Britney replies.The camcorder does not chime in, for the camcorder feels like a third wheel for the first time.

Wearing its night vision goggles, the camcorder documents Britney, Kevin, and the rest of the tour crew’s flight back to the US. Though we viewers cannot hear what Britney and Kevin say to one another on the flight, Kevin and Britney tell us in a confessional that they proposed to one another.

No one proposed to the camcorder.

Britney’s camcorder has been thrown to the wayside. It does not join them at the altar in the wedding planner's living room when Britney and Kevin say "I do."

The trio is back to a duo. But it is not the original duo. It is a new duo. The camcorder’s whirlwind romance with Kevin and Britney is over.