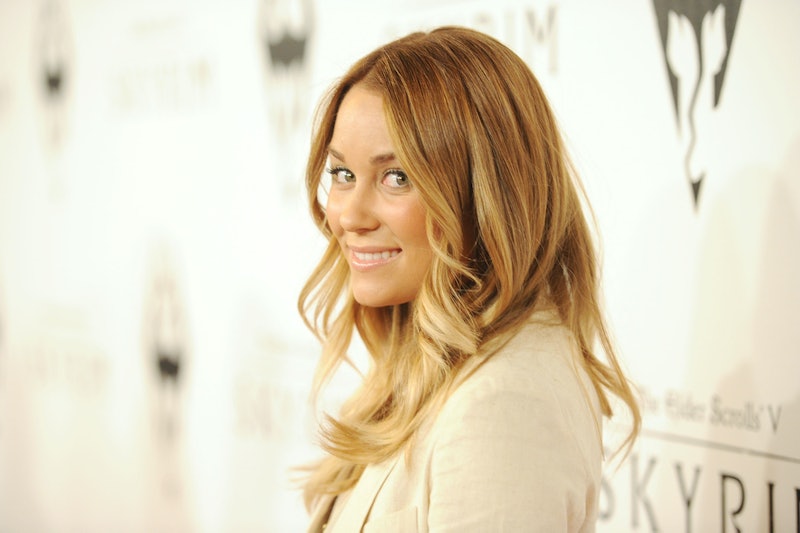 First comes Lauren Conrad and William Tell's marriage. Then comes the exclusive US Weekly cover first look of Conrad's gown and subsequent speculation of what the dress looks like. And, finally, someone on Twitter sends out pictures of the head-to-toe wedding ensembles. After a couple hours of speculation, photos of the bride's gowns have officially been released. Yes, that's gowns. Yes, that's plural. Thank you, Twitter.

Okay, so to be fair, most celebrities do the whole two-dress thing for weddings these days. It's kind of like having multiple cars or owning a small island. They can, so they do, you know? While many celebrity brides opt for a more classic wedding look and a reception gown on the sexier side, or perhaps a simple dress and a second, more extravagant number, Conrad apparently did something a little different.

From the pictures that have been released, it seems that Conrad chose a strapless, plain gown and a high-neck, sleeveless lace gown as well. Both of the dresses are relatively basic, but pretty. While part of me is screaming internally, "This is your wedding we're talking about, LC! It's okay to try something a little bold!" I'm realizing that these dresses are very, very Lauren Conrad. They're simple, SoCal chic looks that complement her natural beauty and beachy waves pretty darn well. So I'll try to hold in my personal thoughts on what she should be wearing.

Of course, Conrad has made quite a name for herself in the world of fashion, so it's a little surprising that she didn't opt for something slightly more...well, fashion-y, but it's true that sometimes classic simplicity and staying true to yourself is the best option when it comes to style. Paired with a simple, gorgeous headdress, the overall look is quintessentially gorgeous.

The couple looks stunning together in every photo that's been released so far, and more importantly—they both look completely and totally blissful, and that's the whole point of a wedding, lest we forget while we get caught up with the fashion. Congratulations to the happy couple!

Update: The name of the designer of Conrad's dress has now been released.

According to Fashionista, Badgley Mischka was behind Conrad's look for her wedding day, and worked with her to design the custom-made gown.

More like this
All Of Kourtney Kardashian’s Wedding Dresses
By Allie Fasanella
The Best Looks From Kourtney & Travis’ Wedding
By Dominique Norman
Gabourey Sidibe Wore A Traditional West African Wedding Dress On The Cover Of Brides
By Dominique Norman
2022's Top Wedding Hair & Makeup Looks, According To Pinterest
By Olivia Rose Ferreiro
Get Even More From Bustle — Sign Up For The Newsletter