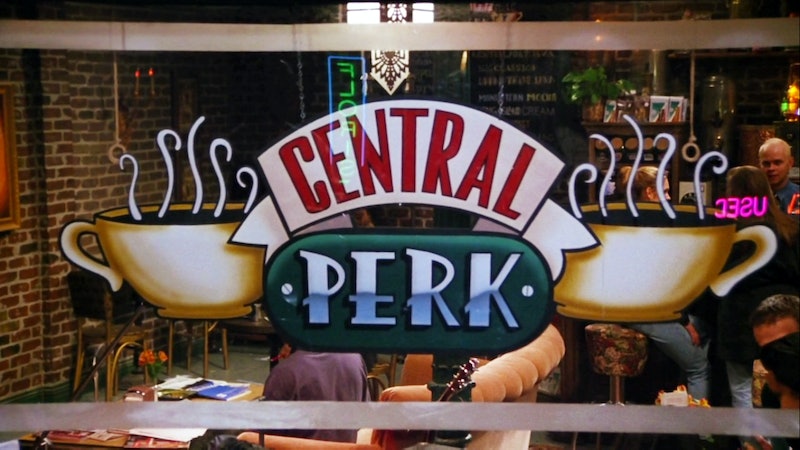 If you're a Friends fan, you likely heard the announcement about the Central Perk pop-up shop in New York City and imagined it would be just like the real thing. Sure, you'd have to work your way around tons of other fans in order to grab a cup of coffee or shove yourself on to that famous couch between two other women pretending that they're Rachel Green, but at least the set up would be the same, right? Wrong. I went to the Central Perk pop-up on it's opening day of Wednesday, Sept. 17 and let me tell you, this is not your favorite fictional coffee shop come to life.

It didn't come as a shock that the pop-up wasn't exactly like Central Perk because, well, it isn't a real coffee shop and it's only going to be around for a month. It had to be designed to accommodate a ton of fans, not a couple dozen coffee drinkers and Wi-Fi users like a normal cafe. So visiting the shop, I wasn't surprised to see things like sponsorship from Eight O'Clock Coffee, security guards walking around, and a person counting visitors at the door. What was surprising was that it hardly looked like Central Perk at all. Fans want to see Central Perk as if it exists in real life. That's the whole point.

Here's what the pop-up got wrong about Central Perk:

The Friends friends ALWAYS drank out of mugs because they always stayed and hung out in Central Perk for, seemingly, hours on end. They were very environmentally friendly for their time! At the pop-up there's just your regular paper coffee cups. They did have one of those cardboard hand-protector thingies around them printed with the Central Perk logo, so I guess you could frame that if you wanted.

Central Perk employees should be casually dressed. When Rachel worked at Central Perk, she wore her normal mini-skirts and dresses with an apron thrown over them. The employees at the pop-up wear all black with Central Perk t-shirts that say "How you brewin'" on the back. Could they be anymore corny?

The Odd Selection of Music

And by "odd selection" I mean they played two Backstreet Boys songs in a row. I don't recall ever hearing a boy band on Friends. Where was Phoebe's music? I would have even accepted something like Fiona Apple to get those '90s vibes goin'.

The Friends couch is iconic and, as we all know, is located in the middle of Central Perk, not up against a wall with a bunch of stuff all over it. At least the chair is in the right place.

On Friends, Central Perk's decor is what I would called "rustic thrift store mess chic." The Central Perk pop-up got this feeling down somewhat, but really missed an opportunity when it came to making the place actually look like Central Perk. I get that they wanted to have some Friends memorabilia around, but at least half of the space could've been free of giant pictures of the cast and drawings of the characters apartments. There were definitely no giant screens replaying Ross' "pivot, pivot" moment in the "real" Central Perk.

The Items for Sale

The coffee is free (which is really quite accurate), but the swag is not. Friends t-shirts, posts, and tote bags are on sale at this Central Perk.

Central Perk is in Greenwich Village on Friends and is near the two main apartments. The apartments are supposed to be located at the corner of Bedford St. and Grove. St. The Central Perk pop-up is at 199 Lafayette St. which is A MILE AWAY. There's no way those lazy fools were walking a mile for coffee.

As for what the pop-up got right, there were round tables near the couch, coffee was available, the "Service" sign was hanging from the ceiling, there were cakes on the counter, and at some point, Gunther will actually be there. And to be honest, I'm sure when Gunther gets there, everything will suddenly feel much more accurate.

More like this
15 Ways To Tell Someone Was Just Talking Behind Your Back
By Carolyn Steber
You Could Significantly Upgrade Your Yard With Any Of These Cheap, Highly-Rated Things
By Madison Barber
25 Questions To Ask Your Friends When You're Bored
By Lexi Inks
You're Probably Doing These Gross Things Around The House Without Even Realizing It
By Rachel Bar-Gadda
Get Even More From Bustle — Sign Up For The Newsletter