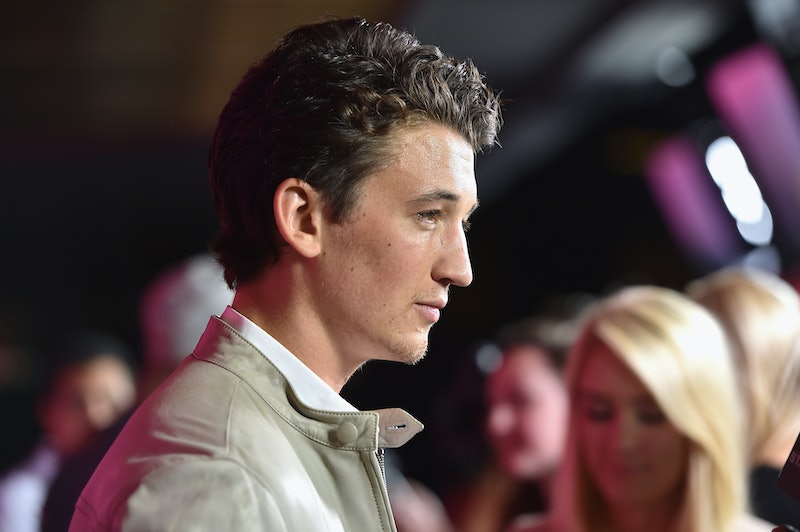 It's hard to think of a young male actor who is as hot as Miles Teller is today. The 27-year-old performer starred in some of the biggest blockbusters of the year (Divergent), carved out a niche for himself in the comedy genre (21 and Over, Footloose, That Awkward Moment) and then completely murdered his goofball typecast with serious and layered roles (The Spectacular Now). Teller's 2014 Sundance offering, Whiplash, is my favorite movie of the year thus far.

And just to prove he's capable of anything, Teller is back to his comedic roots with Two Night Stand, a low-budget comedy co-starring Warm Bodies' Analeigh Tipton. The film surrounds two New York City residents who find their one-night-stand extended when a snowstorm hits the city and forces them to extend their connection. I attended the premiere of the film Tuesday night, and spoke to Teller about his killer career, and why movie-goers are biased against romantic comedies.

"The romantic comedy is a genre of the past few years that's kind of been put down, people don't think it has a whole lot of integrity," Teller said. "They think the acting is bad. They think it's cheesy, but in the '80s romantic comedies were the premiere films."

Teller, who has all the charm and charisma of a John Hughes leading man and the eerie resemblance to '80s heartthrob John Cusack, tackles the genre with ease. "All your great ['80s] actors would do romantic comedies. And I think this is one that hits all those right buttons. It's just very witty," he said.

Outside of the comedic factors, the odd plot — being unexpectedly trapped somewhere with someone — compelled him. "The fact that right off the bat they get to meet each other in this very high stress situation, the storm of the century, by the end of it, spending twenty four hours trapped in one small New York apartment, you will get to know somebody pretty intimately," he said.

Outside of this film, the next several years of Teller's career is already mapped in finite detail. He'll be appearing in the next two Divergent sequels, as well as the Fantastic Four and an already-planned Fantastic Four sequel.

"I joked about it a couple of years ago. I said, 'It's just a matter of time until I play a super hero.' Now I'm happy, very happy to do it with Kate Mara and Michael B. Jordan and Jamie Bell," he said. "Jamie I've been watching since I was thirteen in Billy Elliot. I've always been a big fan of his."

And with the wild success of Guardians of the Galaxy, superhero films are still the hottest thing since YA-adopted blockbusters.

"I hope we do as well as Guardians of the Galaxy. That was very successful. You have four dramatic actors doing the best they can with really good material," he said. "Our special effects are going to be the shit because the guy who's doing them, Kevin Mack, he's an Oscar winner. It's like we have all the pieces around it to be successful so I hope that it all kind of shakes out that way. Because you never know."

Especially as an actor, the phrase "you never know", rings true. Job security is something very few actors can depend on, and for now, Teller is one of the lucky ones.

"Next summer is Legion. The summer after is the next Fantastic Four and then the next Legion. And I know I'm doing – the director of Whiplash, Damien – I know I'm doing his next film in March. Me and Emma Watson. And then, hopefully I can do something in the fall," he explains.

"At the same time I can't wait to have a schedule that's not – since April I've known what I was doing. I could rattle off to you what I was doing every day, every hour until December 16th when I wrap this boxing movie. It's all – it's good and I will hopefully be able to get a house out of the whole thing. You want to be able to take some time for yourself."

See the trailer for Two Night Stand, which hits theatres Friday, September 26, below: