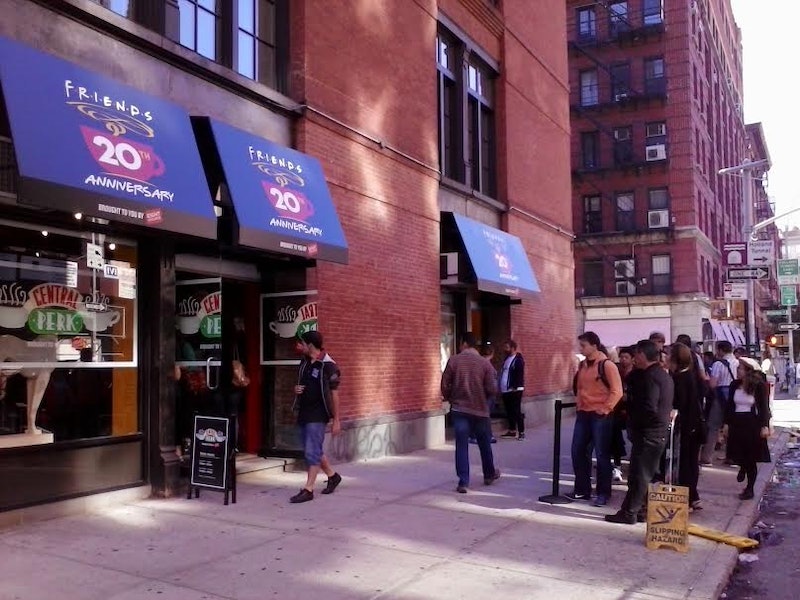 On Wednesday, Sept. 17, the Friends Central Perk pop-up coffee shop opened in New York City and, as expected, people showed up early to experience the iconic cafe first hand and maybe (just maybe) get a look at Gunther. In the name of journalism (and, OK, to maybe see Gunther myself), I visited Central Perk on opening day. The only thing I expected from the experience was that the pop-up would look like a replica of Central Perk (it didn't), but I had no idea what to expect of the people attending. Would there be fans dressed like the characters? Would everyone be walking around quoting their favorite lines? Would there even be a line considering it was 10 a.m. on a Wednesday morning?

To answer those questions: Nope, there was no one getting their cosplay on. No, quotes were not heard echoing off the walls. And, yes, of course there was a line. A very, very long line that wrapped around the block.

While waiting, I noticed that there were many different languages being spoken. The woman behind me was speaking Spanish to a man with her, only changing to English to say Joey's "How you doin'?" in the middle of her conversation. (It was awesome.) Hearing multiple languages isn't rare in New York, and it makes sense that tourists would be the ones able to wait in a line for an hour and a half on a weekday morning. Plus, Friends airs in many different countries. But with such a diverse group, and quite a few people who looked like they didn't even want to be there, I was curious to know what brought people to Central Perk. Were they fans, tourists who were drawn in by all the activity, or reluctant friends who were dragged along?

I decided to ask them.

Where are you from? New Jersey & New York

Why are you at Central Perk? One of these women is a fan, the other two took the "excuse for the morning out" and did their "duty as friends." These three said they didn't mind standing in line because they took the time to catch up with each other. Friends bringing friends together! It was pretty sweet.

Where are you from? The Philipines

Why are you at Central Perk? Ferdinand said, "I'm a loyal fan of the show," and added that Raphael just came along with him. Ferdinand also wanted me to be sure I got his Friends bag in the photo.

Where are you from? Australia

Why are you at Central Perk? Tash and Luke were visiting New York City for a week. Tash is a Friends fan and heard about the pop-up from a friend. Luke was pretty quiet, and it seemed he was just along for the ride.

Where are you from? Hoboken, New Jersey

Why are you at Central Perk? "Friends, of course!" Wanjie exclaimed when I asked her what made her come by the cafe. She added that she started watching Friends when she was in junior high because she was too young to watch it when it actually aired. Yichao came because of Wanjie, and said he's "not that big of a fan, but it's a good show."

Where are you from? Brazil

Why are you at Central Perk? Daniela and Neusa were visiting New York for a week. "I love Friends. I'm a huge fan," said Daniela.

Where are you from? New Jersey

Why are you at Central Perk? "I've been a fan since childhood. I grew up on it." Adriana decided to use the morning to come visit the pop-up because her cousin told her about it knowing she was big fan. She wanted to come by on the first day.

Where are you from? Anna and J.P. live in New York City. Victoria was visiting from Florida.

Why are you at Central Perk? All three said they're big fans, and they decided to stop by on the first day because Victoria was in town. As for if they thought waiting in the line would be worth it, they responded: "We'll see!" and "It's a really nice day."

Where are you from? Lives in Boston, from the UK

Why are you at Central Perk? Sarah and her boyfriend were visiting New York from Boston. She saw something about the pop-up on ABC that morning and decided to check it out. She added that she was "shocked to hear it's been 20 years since it came out" because she was 5 when it premiered and her boyfriend was 13.

Where are you from? Argentina

Why are you at Central Perk? They're both fans of Friends and were leaving New York that night after touring around the east coast. "We were really excited it opened today," Florencia said. "He knows all the lines."

Where are you from? England

Why are you at Central Perk? This group was still all the way at the back of the line when I spoke with them, and were unsure if they'd end up waiting around. Lucy said, "We're Friends addicts" referring to herself and Laura. When I asked Sharon and Andrew if they watched too, Andrew replied, "We do because we're forced to by these two!"

I'm sure it was partially thanks to the nice weather, but for the most part, the people I spoke with seemed totally fine with waiting in line, and many sounded like they enjoyed the chance to spend time with each other. What else did I find? Friends has a very wide variety of fans from young people who got into the show after it was off the air to people from many different countries. Yeah, some visitors just happened to be in town while the pop-up was going on, but they all felt the lucked out at the chance to see it.