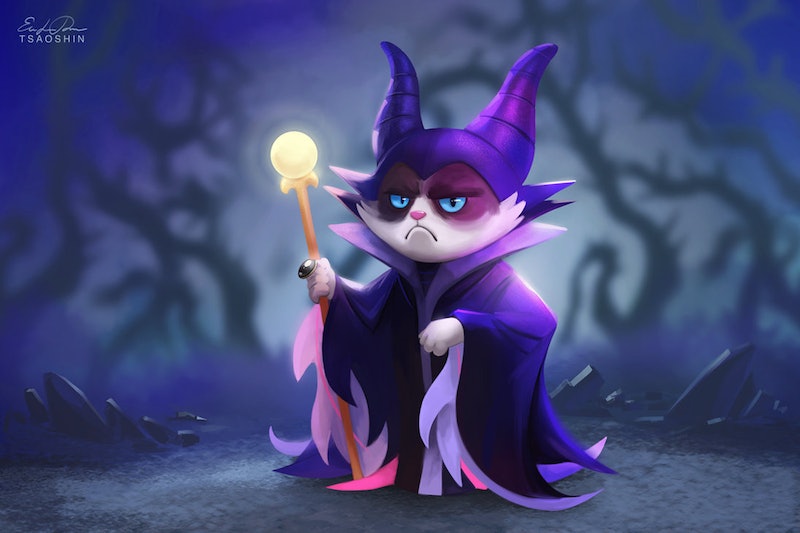 No matter how overexposed she may have gotten, Grumpy Cat is still always funny to me. And when you combine Grumpy Cat with your favorite Disney movies? You guys. It’s the perfect comedic storm. So since it’s Wednesday, here. Have some funny. You deserve it.

Created by deviantART user TsaoShin, real name Eric Proctor, the laugh-out-loud hilarious images of the "Grumpy Disney" series replace characters ranging from Belle to the Blue Fairy with everyone’s favorite bad-tempered kitty. They’re not exactly new — the image that started it all, which features Grumpy as Ariel in her iconic on-the-rock-with-waves-swelling-behind-her pose, was first submitted to deviantART in July of 2013 — but they’re making the rounds again, so let’s take a moment to giggle over them, shall we? No, they’re not exactly thought-provoking social, cultural, or political commentary; but that’s OK. Sometimes, you just need to laugh.

And you know what? My favorite thing about these glorious pieces of art isn’t even the images themselves (although, yes, they are, in fact, spectacular). It’s the titles Proctor has given them. Reminiscent of the sorts of AskReddit threads that ask people to substitute one word of their favorite movie title with, I don’t know, Batman, they drive home the humor like nothing else. The Grumpy Little Mermaid, for example? It’s called “Part Of Your No”:

The Frozen-themed one, which swaps out Elsa for Grumpy, bears the title “Let It No”:

The riff on Beauty and the Beast goes by the name “Tale As Old As No”:

And even The Lion King gets in on the action with “Circle of No”:

I love how Mufasa is just like, “Dude, I have no idea why she’s so pissed off. Sorry. You’re on your own.” Check out the whole "Grumpy Disney" series over at Proctor's deviantART page.

Sometimes I feel bad for laughing at Grumpy as hard as I do; after all, she was just, in the words of Lady Gaga, born this way. The real reason she looks so put out so much of the time is because, due to a number of genetic anomalies, she’s basically got the cat equivalent of Resting Bitch Face. The character that’s been built around her, though? It’s kind of priceless. Besides, she seems to be doing well with her little media empire; as such, I believe the phrase “sorry not sorry” applies.

Grumpy did once get a chance to hobnob with some Disney characters in real life, by the way; she and a particular one of Snow White’s seven dwarfs seem to have bonded over their mutual hate of… well, everything:

You win, Grumpy. You win.