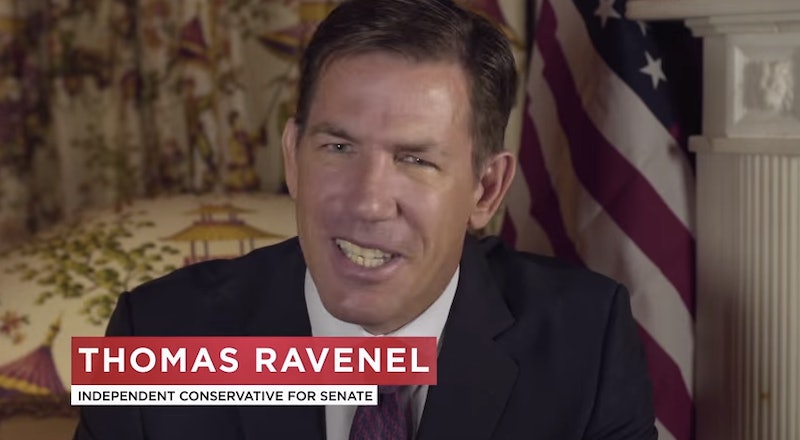 If you've seen five minutes of Bravo's gem of a series, Southern Charm, or are intimately familiar with the city of Charleston, South Carolina, you know that Thomas Ravenel is kind of a dirt bag, to put it mildly. Despite coming from an incredibly well-to-do family, and having a sweet gig as the state treasurer, Ravenel threw it all away with scandals that involved drugs, arrests, and DUIs to name a few things. (Seriously, Google this joker if you don't know about him — I promise you, it's an Internet hole worth going down.)

Even though Ravenel is the joke of many a southern town, he's decided to run for U.S. Senate as an independent conservative — and with his campaign comes an absolutely gorgeous television ad that finally has made it's way to YouTube. In the 30-second spot, it isn't super clear which issues Ravenel is behind and which he's against, but the advertisement, what with various groups of people giving the thumbs-up in slow-motion (and Ravenel asking if they know that they're in slow-motion), is a keeper. And by "keeper" I mean "joke."

Do yourself a favor and watch this super quick campaign ad, courtesy of Southern Charm's Thomas Ravenel. If you think he made an ass of himself on the show, wait 'til you get a load of this.

Do you even know, Thomas?

More like this
Everything We Know About Chèrie & Jessey’s Abrupt Exit From Bling Empire
By Alyssa Lapid
Stormi Just Walked A Red Carpet With Mommy Kylie Jenner & Daddy Travis Scott
By Hugh McIntyre
Kourtney & Travis Crashed His Daughter’s TikTok Live In Their 2nd Wedding Outfits
By Grace Wehniainen
When Was 'Bling Empire' Season 2 Filmed?
By Alyssa Lapid
Get Even More From Bustle — Sign Up For The Newsletter